Looking for an Alexandrine Parrot?

Believed to be native to India and Sri Lanka, the Alexandrine parrot, also known as Alexandrine parakeet, is especially interesting for its flawless imitation of human speech. Some of these parrots are thought to pick up a great number of words to which they would not stop enunciating until mastered.

The Alexandrine parrot, scientific name Psittacula eupatria, was named after Alexander the Great. This parrot was once considered a prized possession amongst the elites and other prominent figures in the past before the species was thensported to different European and Mediterranean countries.

The Alexandrine parrot has started an undomesticated population in over numerous countries, including Japan, where they are believed to live alongside their close relative, the rose-ringed parakeet. with th

The Alexandrine parrot largely measures 56 to 62cm from head to tail, weighing 200 to 300g. Majority of its length lies within its tail, which measures about 28 to 35cm long.

You can easily tell the Alexandrine parrot differently from others by its colours. Its dominant colour is green with a yellow-green abdomen, red patch on the shoulder, light blue-grey cheeks, and incredibly noticeable red beak with a yellow tip. Their tail is a gradient of green and blue following a yellow tip. The underside of its tail is yellow as well.

The difference between a male and a female Alexandrine parrot is the male has a distinguishable black stripe under its cheeks and a pink lining on its nape.

The Alexandrine parrot produces a variety of sounds. Compared to most parrots, their cries are usually deeper, brassier, and fuller. Their voice becomes more abrasive when alarmed. They also shriek loudly when surrounded by predators. They are believed to vocalize harmoniously when flocking.

The average Alexandrine parrot starts to develop their speaking after a year, though majority starts learning around eight months. Males are also believed to be better with clarity and their ability to pick up greater set of vocabularies.

These parrots are intelligent, playful, and can be easily taught to learn tricks. But due to their intelligence, they need to have toys present to keep them stimulated. Though playful, the Alexandrine parrot is not nippy. However, this type of bird has the tendency to pick its feathers. So it is important for a keeper to teach them to play independently whilst they are young.

Teaching this parrot to imitate human speech is best done by repeating the words over and over until they can grasp the words on their own and eventually repeat it perfectly. When training this parrot, your voice should be for guidance and compliments accompanied with treats, so that they would not ignore your instructions. This parrot, being a great talker along with its other capabilities, makes it a more popular pet of choice.

The Alexandrine parrot should be fed with a variety of food, leaning away from sunflower seeds and foods containing large amount of fats. Pellet-based diet along with a great deal of fruits and vegetables will work well.

On the other hand, it is recommended to offer them different types of food every day to refrain them from getting bored.

The Alexandrine parrot can live for around twenty to forty years depending on the care they are provided with.

These parrots are known for their independent nature. They are extremely playful and love to fly around. A large cage that is less likely to restrain their flight whilst giving them the freedom to fly would be helpful. But giving them enough space with a play stand may work as well.

It would also be good to let your parrot roam outside the cage once in a while. It would be of great help for them in terms of stretching and exercise.

Alexandrine parrots love to bathe, but they only do so when they are in the mood. C’snces of refusal might happen when you offer this parrot a bath. Nevertheless, p Pviding them with toular bathse regularly is rto keep their feathers in good conditionann

The Alexandrine parrot is in a near-threatened status according to the International Union for Conservation of Nature (IUCN), due to habitat loss and illegal wildlife trade in many Southern Asian countries.

The Alexandrine parrot rates can range from £200 to £500. The monthly costs of caring for this parrot are dependent on the area and its special needs.

Disclaimer:
The information, including measurements, prices and other estimates, on this page is provided for general reference purposes only.
Budgerigars
Contents 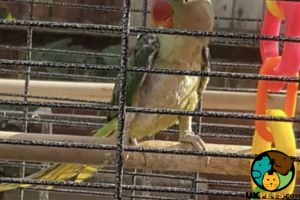