Thinking of buying or adopting a Budgerigars?

The budgerigar (Melopsittacus undulatus) is one of the most recognisable breeds in the world. Budgerigars displayed for sale are similar to that of the wild ones, although they are larger and bred into a variety of colours. The budgerigar colours include blue, grey, mauve, olive, pure white, and yellow, which are said to have short chances of survival in the wild.

There have been arguments as to its name’s etymology. There are people who believe that it is named after the aboriginal word ‘betchegara,’ and when translated, it means ‘good to eat.’ Other believed that it was derived from various Australian slang terms such as ‘budgery,’ which means ‘good,’ and ‘gar,’ which means ‘cockatoo.’ On the other hand, its scientific name fits well with the bird’s description.

Budgerigars are first discovered in its native land, Australia. It is predominantly seen in the open areas, including:

It was first sighted by George Shaw, who was an English zoologist and botanist. However, it was not well-known until the late 1830s. It was John Gould (1804–1881) who took notice of the bird’s captivating beauty. In 1838–1849, he explored Australia and collected this type of specimen. He then published an in-depth description of the budgerigar’s behaviour in 1840, which prompts him to change its scientific name that would recognise its unique characteristics.

In the 1850s, the first captive breeding has begun. However, it was not until the twentieth century when the breed’s popularity and demand surged.

The budgerigar can grow in an average weight of 1.1 to 1.4 ounces and seven inches in length. Its wingspan can be measured in between 10 to 14 inches.

Due to its popularity, this breed is easy to recognise. Its body is usually covered in a light green colour. Its back and wings have yellow undulations with black markings. It is also common for adult budgies to have yellow faces, whilst young budgies have duller feather colour with black-coloured stripes on its forehead and noses.

Further, captive budgies that are bred create a variety of colours, which is categorised into two basic colour series:

In general, both wild and captive budgies have a grey or blue colour on their legs, with reptile-like textured skin.

The budgerigar is prominently kept as pets in the world for good reasons. It has a sociable personality that can do well with a family with children. It should be properly reared by exposure of being handled in its early years. When properly reared, it can be stroked whilst being inside the cage with the use of a blunt stick.

It should be stroked a couple of times a day. You may use your hand instead of the stick when stroking once it has completely adapted. However, know that it takes time for this bird to warm up, and it may take a couple of weeks.

As a sociable bird, it is happiest when kept with company, in pairs or in a colony. It should not be caged in isolation. In fact, in the wild, it thrives in small or large flocks. Budgies are often seen in the following behaviours:

The budgerigar is established as a vegetarian. In the wild, it primarily feeds on small grass seeds and small insects. When rearing one, you may feed it with nuts, grains, and assorted vegetables, which may include carrots, cucumbers, pumpkins, tomatoes, turnips, and others.

Further, there are food packets available in pet shops made specifically for budgerigars. The serving portion should depend on the age, weight, and activity level of your bird. It should follow a diet that answers its nutritional needs. Servings should be ensured fresh at all times.

The average budgerigar lifespan ranges in between ten to twenty-one years. However, it is known to be susceptible to the following illnesses, which you should be aware of:

The budgerigar’s average price will cost around £21. It is important to always acquire one from a reputable breeder or experienced pet owner. Further, specific costing on its food and needs largely depends on its availability on the area and the special needs of the said bird.

Disclaimer:
The information, including measurements, prices and other estimates, on this page is provided for general reference purposes only.
Alexandrine Parrot
Cockatiels
Contents

There is a dispute about the puppy training pads’ effectiveness in potty training. Some attest that they helped pups move forward in training, whilst … END_OF_DOCUMENT_TOKEN_TO_BE_REPLACED 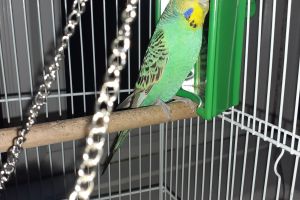 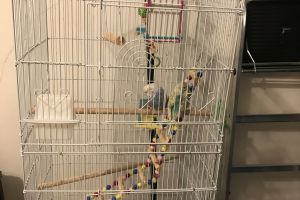 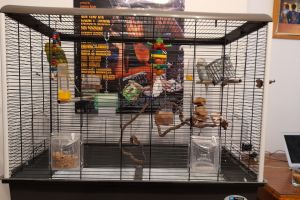 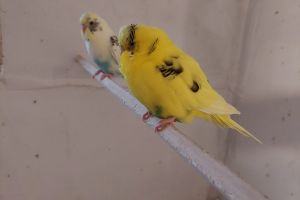