Have you ever seen a body part of your furry friend that makes you go: “What on earth is that?”? Our cats and dogs have appendages that may look alarming at first glance.

Some new pet owners get worried that these “abnormal” anatomical parts might be caused by an infection or disease. To ease your worries, we have listed 8 body parts of cats and dogs that are commonly misunderstood.

A dewclaw is the digit on a dog’s or cat’s paw that “looks like a human thumb”. It is positioned higher up on the leg compared to other claws, which prevents it from touching the ground.

Most pooches have this inside of their front legs whilst others have them on their hind legs. In dogs, dewclaws are their big toes and thumbs even though they do not precisely equal to the human structures. On the other hand, felines only have it on their front paws.

Dewclaws are some features left of the evolutionary process in both animals. Back in time, which is around 40 million years ago, miacis, a feline-looking creature and also considered as the early ancestor of today’s pooches, needed every claw to climb up on trees.

However, modern dogs have long evolved into canines that hunt on the ground instead of up on trees. Therefore, their physiology changed to suit their current needs.

Dogs use dewclaws now to prevent their legs from contorting, and to have balance and speed whilst running. As for felines, they occasionally use their dewclaws to get a better grip on their food or toy.

Do you notice the small pocket located outside your cat’s ears? Yes, that is Henry’s pocket or in science lingo, cutaneous marginal pouch. It is not only present on cats but also bats and some pooches.

Most domestic cats have this pocket whilst only a few dogs do. Dogs with erect ears and/or sparse coats such as Pugs, Chihuahuas, Corgis, and Boston Terriers are more likely to have the Henry’s pocket.

Science still has not figured out the actual purpose of this odd pocket but they have theories. One of the most prominent theories is that the Henry’s pocket aids in boosting the detection of sounds in pooches and felines. It accentuates the lower pitches in order to identify high-pitched sounds.

Another theory presents that it barricades or encloses sound waves every time dogs angle or tilt their ears. Lastly, it is assumed that the Henry’s pocket makes it easier for dogs to fold their ears.

Parasites are notorious for hiding in the Henry’s pocket. Therefore, it is essential to check it every time you groom your cat to prevent any ear infection or diseases. You must also make sure that the vet checks that area when assessing the condition of your cat’s ears.

Nictitating film is present in both cats and dogs and it is known as the haw or the third eyelid. Yup, our furry buddies do not only have one but three eyelids!

When the third eyelid closes over their eyes, it’s as if their eyes are rolling at the back of their head. In other occasions, their lower and upper eyelids open while they are snoozing which makes it look like they have white eyeballs because the nictitating film is closed.

Although the main purpose of the third eyelid still remains a mystery to science, researchers believe that it has a number of handy uses. As stated by Deborah S. Friedman, a Doctor of Veterinary Medicine and diplomate with the American College of Veterinary Ophthalmologists, it washes off the mucus and debris on the cats and dogs’ corneas.

It makes one-third of the dog’s tears and creates antibodies that fight infection since it has a lymphoid tissue. Plus, the third eyelid also comes in handy in maintaining the moisture in our furry companions’ eyes without needing to blink.

Indeed, just like us cats and dogs have bellybuttons too! Generally, all mammals have it. However, in most cases, your cat or dog’s navel is barely visible because their furs tend to obscure it from view.

After a few days, the umbilical cord, which is still attached to the kitten, will dry up and fall off. It will leave a scar which is now called the navel.

You can find your pooch’s navel in the middle of his abdomen between the ribcage and hips. Meanwhile, a cat’s navel appears or sticks out as a tiny hole on their lower abdomen.

Lentigines are little dark spots that appear on a cat’s eye rims, lips, and gums. It is a genetic condition commonly found in tortoiseshell, calico, and orange cats so it is dubbed as “orange cat lentigo.” These spots begin appearing when the cat is 1-year-old.

They would commonly appear first on a cat’s lips without any symptoms. Some of the lentigines may get larger or multiply. They could even appear on the cat’s footpads and inside their ears.

Although the black spots may seem alarming, you don’t have to worry because it is just cosmetic and will never develop into melanoma. The black spots are only the result of the increase of melanocytes.

Since melanoma and lentigo look the same, it can be tricky to distinguish which is which. However, the general criteria used to identify if the black spots are caused by lentigo are it must be 1 to 10 mm in size and should be flat without any signs of lumps. If you are unsure of the black spots appearing on your feline friend’s body, be sure to contact your vet.

These extraordinary parts of your pet’s body are actually normal. They may seem strange at the beginning because we never heard of them or they differ from a human’s body structure. We hope this list helps in easing your worries about the odd body parts your cats and dogs have.

Dogs are common hosts for various intestinal worms. Many dog owners are wondering, “What home remedy can I use to deworm my dog?” We have  6 natural … END_OF_DOCUMENT_TOKEN_TO_BE_REPLACED 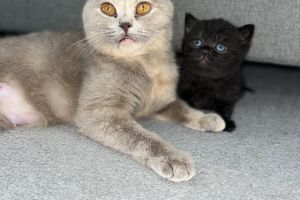 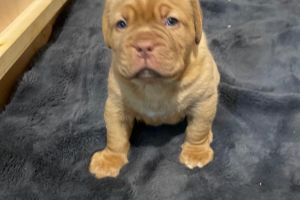 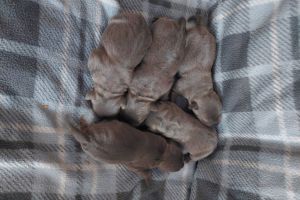 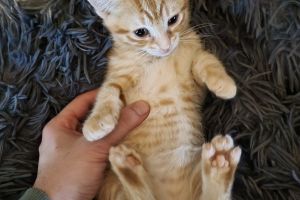 Ginger and tabby kittens for sale