The Cavalier King Charles Spaniel is a majestic breed that expects the royal treatment. They are great companion dogs that love being showered with affection. They are extremely adaptable and can handle a range of environment or situations. Their sweet and gentle nature makes them suitable for homes with kids and other pets.

Taking care of a Cavalier King Charles Spaniel requires knowing the breed’s unique physical attributes, temperament, tendencies, and health concerns so that you can provide the best care for your Cavalier.

The Cavaliers have very sensitive eyes. They can develop a range of eye conditions if not properly taken care of. Eye discharge is common amongst Cavaliers. It may be due to allergies or a foreign body entering the eye. It may build up around the eyes and start to crust. This can be uncomfortable and painful for your dog.

Make sure to keep your Cavalier’s eyes clean by wiping off dirt and discharge around the eyes using a damp cloth. The gunk can also be flushed out by using a canine eye solution or eyewash. If there is a thick discharge and your dog keeps pawing at his eye, there could be an underline health issue, it’s best to consult a vet.

Trim your Cavalier’s nails at least once a month or when it gets too long. If your Cavalier regularly walks on hard surfaces, his nails may not need as much trimming because they can wear down on their own. However, when you start to hear clicking noises when the nails hit against a hard floor, it’s time for a trim.

Follow these steps on how to properly cut your dog’s nails:

Step 1
Hold his paws in your hand and gingerly start running your thumb over his nails. Your Cav’s nails have an outer shell that protects the blood vessel and nerve endings (called the quick). You have to be careful not to cut too close to the quick.

Step 2
Take one paw and use the clipper to slowly apply pressure on a nail. However, do not trim it just yet, as your pooch needs to get used to the clippers.

Step 3
Repeat step 2 until he gets accustomed to the clippers on his nails. Rewarding him with treats if he behaves well during this step will make this task a lot easier.

Step 3
Start clipping your dog’s nails. Keep in mind to trim only the white parts of his nails. Avoid cutting the nails too short or you might end up cutting the blood vessels and nerve endings.

A Cavalier needs to be bathed and brushed regularly to keep his coat clean and healthy. Wash him at least once a week and brush his coat three to four times a week. The Cavalier King Charles spaniel is a moderate shedder and routine bathing and brushing will help get rid of the moulting fur. The hair on his legs and ears tend to tangle easily due to feathering, thus you need to give them more frequent brushing.

The Cavalier’s long floppy ears obstruct ventilation which makes the inside of the ears susceptible to infections and yeast build-up. Trim the hair inside the flap area to let the air flow inside. This will stop the accumulation of moisture and prevent harmful bacteria from thriving inside his ears.

Check your cavalier’s ears at least once a week to prevent excessive wax build-up and infections. Use veterinary-approved ear cleaner to loosen the dirt and debris. Gently wipe away dirt using a cotton ball. Avoid using objects to penetrate your dog’s ear as it can cause damage to his ear canal.

An active adult Cavalier King Charles spaniel with an average weight of 15 pounds requires approximately 530 calories per day. It is equivalent to 1 to 1.5 cups of dry kibbles daily. It is recommended to serve it in two separate meals. A Cavalier puppy, on the other hand, needs at least three to four meals daily, which are ideally divided into equal portions to avoid excessive eating.

When you are feeding your long-eared pooch, make sure to take precautionary steps to keep his ears clean. You can pull them back using a headband or an elastic band to prevent them from dipping into his food.

Trivia: There are dog bowls designed for long-eared dog breeds. These food bowls normally have a bigger base and a smaller opening.

Although the Cavalier is a lapdog and content with staying at home with his human family, it is still essential to provide him with daily exercise. An hour of walk daily is enough to keep your dog healthy and prevent him from gaining extra weight. Just make sure to take him out when the weather is cool. Since this breed is brachycephalic, walking him on a hot day can cause breathing difficulties and heat exhaustion.

The Cavalier King Charles spaniel is at risk of suffering from a number of diseases due to his genetic predisposition. The following are the major health problems you should look out for:

The Cavaliers are 20 times more prone to developing mitral valve disease (MVD) than other dog breeds. Heart murmur, which is an additional vibration of the heart caused by the disturbance of blood flow, is one of the early signs of MVD. If not given proper medical attention, it can lead to heart failure.

About 20% of Cavalier King Charles spaniels are afflicted with patellar luxation. This health issue is a result of the dislocation of the pooch’s kneecap (patellar) from the thigh bone. Patellar luxation can cause pain and discomfort and even result in lameness.

The Cavalier is predisposed to the neurological condition known as Syringomyelia where there is a fluid build-up in the spinal cord. This is commonly caused by the malformation of the dog’s skull, which makes it stick to the vertebrae in the neck. As a result, the fluid found in the brain is forced down the centre of the spinal cord. A Cavalier King Charles spaniel suffering from this condition may show symptoms of sensitivity around his neck, head, and forelimbs. He may also have a wobbling hind limb when he walks.

Treatment for Syringomyelia is a combination of therapy and medication. Surgery to improve the shape of the skull needs to be considered if therapy is unsuccessful.

Socialising adult dogs may seem like a daunting task as some full-grown pooches are set in their ways. However, all hope is not lost. There are many … END_OF_DOCUMENT_TOKEN_TO_BE_REPLACED 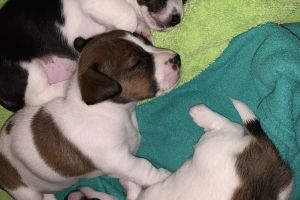 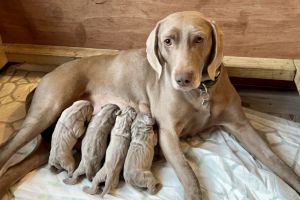 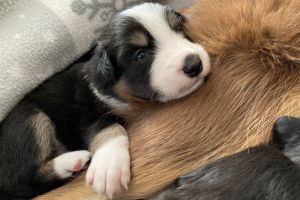 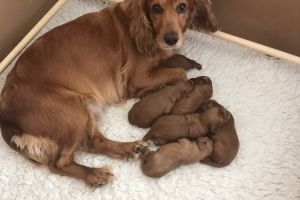