How to Breed Hamsters?

Did you know that three Syrian hamsters can produce 364 babies in one year? Yes, hamsters are believed to have an incredible capacity to breed. However, hamster breeding can be problematic because hamsters are not known to be sociable. They are caged alone rather than kept in pairs. Whilst this can prevent unwanted hamster pregnancies, this also makes breeding them difficult, so how to breed hamsters?

Female hamsters became sexually matured as soon as they are 28 days old. The female will start to manifest signs of first heat cycle when she is about 35 days old or about 5 weeks old.

Females in heat may behave similarly to cats with these indicators:

However, unlike cats and dogs, the heat cycle of hamsters is short and fast. It occurs once every four days. On the other hand, male hamsters do not undergo heat cycles.

Breeding should not be done when the female is not in heat. This will often lead to an undesirable situation where the female hamster is likely to fight and usually the female wins and may kill the male.

Look for a neutral zone.

Introduce your female to a male gradually. Keep them in separate cages and place the cages next to each other. Give them a few days to acclimate to each other’s presence before anything else. Be patient and let the pheromones do their work. This preparation is crucial to how to breed hamsters.

Some breeders suggest placing both male and female in a cage which is new to both, as neutral territory. If you do this, place the male in the cage first and allow him to calm down and explore the area before adding the female.

Be sure to wear a pair of gloves in case there is a need to break a fight between the two. If this happens, separate the two and wait for another day to try again.

How to breed hamsters successfully? Get the timing right.

Aside from setting the appropriate place, consider the right time as well. As nocturnal animals, the introductory greeting can be done in the evening.

Watch out for signs of fights. If everything goes to plan, the female will be in a position with her tail raised. The male will then approach the female in heat. If the timing is off, you will find yourself with two hamsters fighting. Be sure to break the fight immediately.

Keep a close eye between the two hamsters whilst being kept in one cage. After mating, the female hamster should be isolated in a comfortable place. Note that some males have the tendency to attack and eat their babies.

The gestation period for hamsters is relatively short compared to other mammals.

How long does it take for a hamster to give birth?

This varies accordingly to the breed of the particular hamster.

Caring for a pregnant hamster

There are no special measures to do when tending a pregnant hamster. Just remember these few things:

When the female is close to delivering babies she particularly becomes restless. She paces back and forth to her cage and may start to hoard food and nesting materials for preparation.

The birthing process begins as soon as she starts heaving and cute little pink bodies start to appear. Hamsters have natural maternal instincts. The mother hamster will then pick them up gently with her mouth to bring them to the nest.

Allow nature to take its course. As an owner, you should not attempt to help her in any way. Just make sure to give them the appropriate food and nesting materials.

Whilst the mother has maternal instincts, it is usually limited to the phase before weaning. This is when your assistance is needed.

The hamster litter size largely depends on the breed of your hamster as well as the particular hamster. However, the range is often between 4 and 6 but can also be as many as 12.

Life of a baby hamster

It is best to leave those furry babies under a mother’s care for at least three weeks. You should not in any way disturb them to avoid stressful situations for the mother; unless when you are cleaning the cage or giving food and water. Note that she is likely to put her babies in her mouth when she feels threatened.

At five days old, they find the inclination to explore the cage even with their eyes closed. You should find the perfect accessible place for water bottles and food in the cage. They will start to drink water at the age of 13 to 15 days. By that time, their eyes will start to open.

They can be weaned from their mother in about 3 weeks of age. Keep in mind that they are considered sexually mature at the early age of 6 to 7 weeks old. That being said, consider keeping them in a separate cage from then on. And so, the cycle repeats.

Are you planning to rear hamsters as pets? Check out available hamsters for sale.

Man Finds a Not-So-Ordinary Baby Squirrel on His Bed

Man Finds a Not-So-Ordinary Baby Squirrel on His Bed

Basic Guide for Rats as Pets

Basic Guide for Rats as Pets

Many dogs love bananas. Can cats have bananas too, or should pet parents keep these fruits to themselves? Evaluate the benefits and risks of feeding … END_OF_DOCUMENT_TOKEN_TO_BE_REPLACED 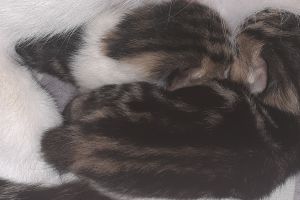 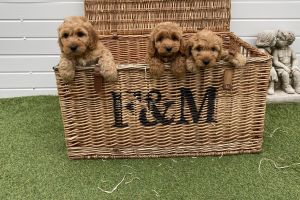 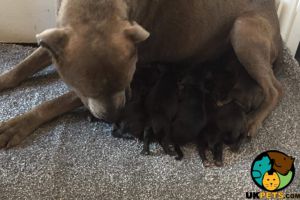