Pancreatitis in Dogs: What Are Its Causes, and Is It Curable?

Pancreatitis in dogs is a sneaky condition that can remain undetected for a long time. And once it occurs, it can become life-threatening.

Detecting pancreatitis during its early stages and seeking immediate treatment will save dogs from fatal consequences.

In this article, you will know the causes, symptoms, and treatments for pancreatitis. You will also learn ways to manage pancreatitis in dogs.

What is pancreatitis in dogs?

Canine pancreatitis is a gastrointestinal problem that mainly affects a dog’s pancreas. It is the organ responsible for releasing enzymes that aid in digestion and the regulation of blood sugar.

Normally, the enzymes produced by the pancreas will only activate once they enter the small intestines.

However, with pancreatitis, the enzymes are activated immediately after being released, causing the swelling and inflammation of the pancreas.

In some cases, the enzymes may even digest the pancreas itself. This will cause excruciating abdominal pain to your dog.

What are the causes of pancreatitis in dogs?

Experts have yet to discover what primarily causes pancreatitis in dogs. 90% of the time, the cause behind this condition is idiopathic, which means it cannot be determined.

However, it is observed that the occurrence of pancreatitis in dogs is linked to numerous factors such as:

What foods can cause pancreatitis in dogs?

Fatty foods such as chicken skin, bacon, butter, and red meat can trigger canine pancreatitis. Table scraps are very high in fats, thus avoid feeding these to your pooch.

Slipping pieces of fatty meat to your dog during meals should also be avoided. If given in small amounts every meal, the fats can slowly pile up in his body. This may, later on, result in pancreatitis.

Can peanut butter cause pancreatitis in dogs?

Peanut butter is high in fats and should only be given sparingly. Excessive consumption of peanut butter can lead to pancreatitis and other health problems such as obesity, skin issues, and liver diseases.

Some dogs have dietary indiscretions. They may carelessly eat anything they find, such as spoiled food, or consume large amounts of dog food.

Obesity is a significant risk factor that can lead to canine pancreatitis. According to a study, middle-aged and geriatric overweight dogs are more vulnerable to this gastrointestinal problem.

Drugs used in chemotherapy treatment as well as potassium bromide, which is an anti-seizure medication, can cause canine pancreatitis.

Other drugs that may induce canine pancreatitis include thiazide diuretics, cholinesterase inhibitors, and salicylates.

What toxins cause pancreatitis in dogs?

A toxin used for insecticide in flea control products called organophosphates can trigger pancreatitis in dogs.

There is a possibility of pancreatic damage if a dog is involved in an accident, such as falling from a high place or getting hit by a car.

These accidents may set off pancreatic inflammation. Pancreatitis can also be a side effect of a surgical procedure.

Endocrine hormone imbalance can affect the normal function of the pancreas. Diabetes mellitus, hyperadrenocorticism, and hypothyroidism are the most common endocrinopathies that may stimulate canine pancreatitis.

What breeds of dogs are prone to pancreatitis?

Small animals, like the Dachshund, are believed to be predisposed to acute pancreatitis. On the other hand, the Boxer, Cavalier King Charles Spaniel, and Cocker Spaniel are more prone to chronic pancreatitis.

Other dog breeds that have an increased risk of this gastric disorder are Miniature Poodle, Briard, Shetland Sheepdog, Miniature Schnauzer, Yorkshire Terrier, and Silky Terrier.

It is also known that breeds that are classified in the Toy Group and Utility Group by all-breed clubs (like the Kennel Club) are vulnerable to pancreatitis.

What are the different types of canine pancreatitis?

Pancreatitis in dogs comes in 2 types: acute and chronic. The 2 differ on how they manifest in dogs.

It is the sudden onset of pancreatitis, which can swiftly result in systemic inflammation.

This type can lead the digestive enzymes coming from the pancreas to flow into the abdominal activity and cause damage to other digestive organs, including the liver and intestines. Acute pancreatitis can also lead to the obstruction of the bile ducts.

If this remains undetected, it can lead to life-threatening results. Acute pancreatitis is often more severe than chronic pancreatitis. It can result in systemic inflammation and death.

The gradual development of pancreatitis is what is described as a chronic condition. Repeated episodes of acute pancreatitis can cause this problem. In most cases, chronic pancreatitis is undetected and undiagnosed due to mild symptoms.

Acute pancreatitis is more common and severe in dogs than chronic one. Chronic attacks of pancreatitis appear to be milder, but its long-term impact tends to be more serious.

Dogs with chronic pancreatitis are most likely to develop diabetes and exocrine pancreatic insufficiency.

What are the symptoms of pancreatitis in dogs?

The following are the most common clinical signs of pancreatitis:

When a dog is experiencing an episode of pancreatitis, he is very likely to assume a praying position. His backside will be up in the air whilst his head and front legs are lowered to the ground.

A severe pancreatitis attack may lead to serious consequences. Sudden onset of extreme depression, acute shock, and even death can occur. For this reason, pancreatitis in dogs should be taken seriously.

Dogs suffering from this health issue must receive prompt veterinary care and treatment.

How to comfort a dog with pancreatitis

Pancreatitis is a painful experience for dogs, and dog owners will find it heartbreaking to see their furry friend suffering. Here are a few things that you can do to ease your pet’s distress:

Give your dog’s tummy time to rest by withholding solid food for about 12–24 hours. Make sure to consult the vet beforehand to set a fasting time that is appropriate for your pooch.

What foods are bad for dogs with pancreatitis?

To avoid worsening your dog’s gastric distress, switch to natural and low-fat food. Its fat content should be around 8% or less. His meals should also be composed of organic and digestible veggies, including carrots, spinach, and sweet potatoes.

Giving your dog large meals would mean his stomach will have to digest food in large amounts. This process can overwork his digestive system. Instead of feeding him one large meal a day, divide it into 5–6 smaller portions.

Although it might be very tempting to give him human food or table scraps, avoid doing so. He should only have minimal fatty foods in his diet to avoid aggravating his condition.

As much as possible, avoid carrying or moving your dog around too much. Again, pancreatitis is a very painful condition, and handling him frequently will increase his discomfort. It would be better to let him rest in a quiet room where he can relax.

Pancreatitis commonly comes with diarrhoea, so be sure to have lots of puppy pads ready. Even if your dog is fully potty-trained, accidents may happen because of his condition.

Always keep in mind to be patient and understanding. Do not punish your dog for eliminating in the wrong area.

Is pancreatitis in dogs curable?

Canine pancreatitis has no specific cure, but it can be remedied with the help of supportive treatment.

Many dog owners ask the question: “Can I treat my dog’s pancreatitis at home?” Home remedies should not replace the importance of vet treatment, but they may alleviate the negative effects of pancreatitis a little.

Digestive enzyme supplementation is the most common home remedy for pancreatitis in dogs. It helps in making the pancreas “rest” and decreasing pancreatic enzyme secretion.

But remember that pancreatitis in dogs is a serious condition. Home remedies can only do so much in managing this disease.

Thus, veterinary treatment is a must for affected dogs to safely and fully recover from canine pancreatitis.

How do vets diagnose pancreatitis in dogs?

Diagnosis of pancreatic dogs includes looking over their medical history and conducting a physical exam. Other methods commonly used to diagnose canine pancreatitis are:

Your dog may be required to get a complete blood count (CBC) and biochemical profile. This is to check if his organs have any inflammation or infection.

Blood work also indicates if the symptoms that your dog is showing are linked to pancreatitis or completely unrelated.

If the blood work does not yield definitive results, an abdominal ultrasound may be recommended to view your dog’s pancreas and determine if he has pancreatitis.

This can determine if there is an increase in pancreatic enzyme levels. Whilst it may indicate pancreatitis, it does not guarantee an accurate diagnosis.

This is because some health problems such as dehydration and kidney diseases can also cause elevated pancreatic enzyme levels in dogs.

It is a new but reliable blood test that can accurately determine whether a dog has pancreatitis or not. Canine pancreatic lipase measures the pancreas-specific lipase in a dog. It is considered one of the best diagnostic methods for canine pancreatitis.

Studies show that around 85% of pancreatic dogs will exhibit high values of this lipase. Thus, there is a 96% chance that a dog has pancreatitis if his test results show high values of pancreas-specific lipase.

However, even with the aid of these tests, some cases of pancreatitis, especially chronic ones, can be hard to diagnose. Thus, the vet may need to rely on the medical history and clinical signs in these kinds of instances.

How do you cure pancreatitis in a dog?

As stated before, canine pancreatitis has no definitive cure. However, with immediate and appropriate supportive care, affected dogs will be able to recover safely.

In most cases, pooches with pancreatitis will be medicated with analgesics, anti-inflammatory, and anti-nausea. These will relieve the symptoms of pancreatitis, such as stomach pain, vomiting, and diarrhoea.

Dogs suffering from concurrent infections will be prescribed antibiotics.

IV fluids or intravenous fluids will also be given to avoid dehydration. Fasting is recommended to dogs that are vomiting. It can last for a few days or until their vomiting stops.

In some cases, nutritional sustenance from a feeding tube is necessary as the severity of their condition hinders them from eating properly.

How long does it take for dogs to recover from pancreatitis?

Dog pancreatitis recovery time for mild and moderate cases is around 2–3 days. This is far better compared to dogs with severe pancreatitis who may need to stay in the vet clinic for a few weeks or more until their body recovers.

Dog owners should be aware that although the symptoms are gone, their pooch’s pancreas might have sustained permanent damage.

The recurrence of pancreatitis is also high for dogs that have recovered. The vet usually recommends a permanent low-fat diet to prevent pancreatitis from recurring.

Yes, most dogs survive pancreatitis through early detection and timely treatment of the disease. Mild to moderate forms of canine pancreatitis have a good prognosis and a high survival rate.

Unfortunately, the same cannot be said for severe cases, as its dog pancreatitis death rate is high. Research shows that 40% of dogs with acute and severe pancreatitis may die.

How to prevent pancreatitis in dogs and pups

The full prevention of pancreatitis is not attainable, but there are things that puppy parents or dog parents can do to lower the chance of their pups and dogs from developing this health problem.

Here are a few tips that you can follow: 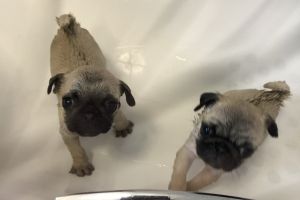 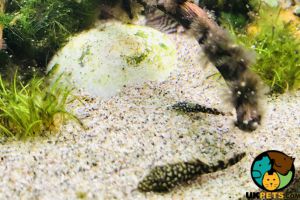 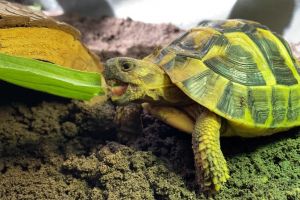 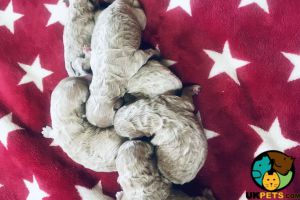