Share this: Facebook Twitter Email
Many rare dog breeds have gone to near extinction in the past, leaving them few in number. They are so scarce that estimations can only be made about their population, which ranges from hundreds to a few thousand. Here are 13 rare dog breeds you probably have never seen or heard of.

The Biewer Terrier is one of the rare dog breeds accidentally produced by a recessive gene. He first appeared in the 1980s in a litter of a Yorkshire Terrier owned by the Biewer family. It was discovered that he possessed the recessive piebald gene, which is uncommon in Yorkies.

The Biewer family was very picky about who they gave Biewer Terriers to. Thus, only a few breeders produced these rare dogs. After Mr. Biewer became ill, the Biewer Terrier breeding program was completely shut down.

Other breeders tried to replicate this rare dog breed but failed. In the 2000s, the popularity of the Biewer Piebald dwindled. It did not pick up until he was introduced to America. However, although he has gained the attention of breeders,  he remains one of the rarest breeds of dogs.

The Finnish Spitz is a rare dog that specializes in hunting small game and birds. He became one of the rare breeds of dogs after hunters overbred him with other dogs. When 1880 came around, the Finnish Spitz was on the brink of extinction as only a few purebreds were left.

Fortunately, two Finnish men named Hugo Roos and Hugo Sandberg managed to revive the rare dog breed. Both were big fans of the Finnish Spitz and worked hand in hand to ensure that the breed was preserved. Sandberg promoted the breed while Roo became an influential breeder of this rare dog.

The Canaan dog is one of the most ancient and rarest breeds in the Middle East. He assisted shepherds for thousands of years in droving, herding, and guarding livestock.

In the year 70, Canaan dogs lost their homes after the Romans drove away Israelites from Jerusalem. They lived undomesticated in the Negev Desert until the 20th century.

These rare dogs were trained and re-introduced back to civilization as military dogs during World War II. When the war ended, Canaan dogs were used as guide dogs for the blind. The Canaan dog breed was later on declared as the national dog of Israel.

Aside from being rare, the Peruvian Inca Orchid is also one of the most unique dog breeds in existence. He is known for his hairlessness and high body temperature. During ancient times, the Incans used him as a bed warmer.

The downfall of the Incan Empire greatly reduced the number of Peruvian Inca Orchids. They were treated as outcasts in urban areas because of their hairless features. People viewed them as disease-carrying dogs due to their unique hairlessness.

Breeders who were fond of the breed saved it from extinction. An American named Jack Walklin made a big contribution to the Peruvian Inca Orchid’s increasing fame in the United States and Europe.

The Lagotto Romagnolo is a captivating canine because of its Doodle-like features. His body is covered with a thick curly coat that can come in various colours like brown, off-white, and orange. He is one of the most beautiful rare dog breeds you will find.

Another thing that makes the Lagotto Romagnolo one-of-a-kind is his adeptness at hunting for truffles. No other dog breed possesses this ability. For this reason, he is dubbed truffle dog.

The Lagotto Ramagnolos became a rare breed due to excessive crossbreeding. Hunters focused more on producing the best truffle dogs instead of preserving the breed. Fortunately, Lagotto Romagnolo enthusiasts have kept the breed from becoming extinct.

The German Pinscher is a rare dog that contributed to the development of several breeds. He is a progenitor of all Schnauzers as well as the Doberman Pinscher and Miniature Pinscher.

When the Second World War hit, German Pinschers were on the verge of extinction. One man took it upon himself to revive the breed. He risked his life smuggling a female Pinscher into West Germany and bred her with regular and Miniature Pinschers.

Today, the German Pinscher is less popular than other Pinscher breeds. He is rarely seen in other parts of the world.

The Catahoula Leopard Dog is one of the rare dog breeds with mysterious origins. How he came into existence is unknown. However, he is believed to be a descendant of war dogs, which are a combination of Bloodhounds, Greyhounds, and Mastiffs. Some speculate that he is related to jackals and dingoes.

Catahoula Leopard Dogs were highly prized hunting dogs that also helped in herding wild cattle and hogs. Today these rare dogs are hailed as the official state dogs of Louisiana.

Not only one of the rare big dog breeds, but the English Foxhound is also the rarest of the 4 foxhound dogs. He was originally bred in Great Britain to hunt for foxes.

However, the development of Deerhounds and Staghounds led English Foxhounds to fall out of favor. Their fame rose again when King Henry VIII took an interest in fox hunting. Despite their renewed popularity, they remain rare. The population of English Foxhounds did not increase up to this day.

The Swedish Vallhund’s history began a thousand years ago as a farm helper of the Vikings. His tasks primarily revolve around herding the livestock and guarding homes. He is one of the rarest dogs with Nordic origins.

In the 1940s, Swedish Vallhunds faced the threat of extinction. They were saved by Bjorn von Rosen, a Swedish breeder who aimed to preserve Nordic dog breeds. Although these pooches were saved from getting wiped out, their growth in popularity is slower than other canines, making them one of the rarest dog breeds in the world.

The Pyrenees Shepherd or the Pyrenees Sheepdog is one of the rare small dog breeds with amazing shepherding abilities. It is believed a duo of these dogs can herd over 1,000 sheep. His origins can be traced back to medieval times.

When World War I started, Pyrenees Shepherds served in the military. They become messenger dogs for the troops and also help in search and rescue operations for wounded soldiers.

The Thai Ridgeback is a native dog in Thailand. He existed for over 400 years as a multipurpose canine companion. He guarded homes, escorted carts, and hunted rats and wild boars. People also call him a cobra-killing dog as he will not back down when face to face with a poisonous snake.

Thai Ridgebacks are rarely found outside Thailand, which lessens their chances of mating with other breeds. Thus, they can retain a fairly pure bloodline.

The Norwegian Lundehund is one of the rarest dog breeds that possesses an equally rare trait. A polydactyl dog, he has 6 fully developed toes on each foot, which helps him navigate steep cliffs to hunt puffins.

Norwegian Lundehund lost their purpose after hunters preferred to use hand-held nets to catch the said birds. They nearly became extinct if not for the efforts of an English Setter breeder named Eleanor Christie to keep the breed alive.

He is a native Malaysian breed that has long been the canine companion of an old tribe called Orang Asli. They live together in stilted houses up in the trees in the jungle.

Telomian dogs adapted to the daily life of the Orang Asli. They learned the unique ability to climb up ladders leading to their home and open closed doors.

That is not the only odd thing about this rare dog breed. It is speculated that most Telomian dogs found in Malaysia were products of crossbreeding in the 1960s and 1970s. The Telomian dog is one of the rare dog breeds not recognized by AKC and the Kennel Club in the UK.

Why are some dog breeds rare?

Reading the brief history of our list of rare dog breeds may have given you an idea of what caused them to become scarce. It can be attributed to many factors, such as:

We should thank dedicated breeders for preserving these nearly extinct dogs. Because of their continuous efforts, these breeds continue to live with us today and are not only remembered through pictures and tales.

The mixed-breed lineage of the Yorkie Poo makes it challenging to determine if he has fully reached his adult size. With the help of this article, … END_OF_DOCUMENT_TOKEN_TO_BE_REPLACED 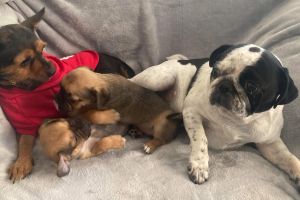 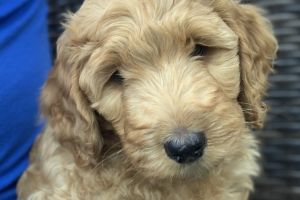 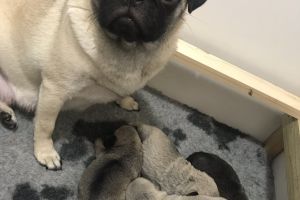 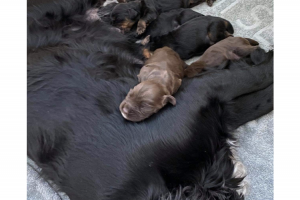