Every year, my family and I hatch out chicken eggs in exchange for the ones we lost in the previous year.

We usually get the hatching eggs locally. However, we tried checking eBay this time and to our surprise, we found this emu hatching eggs. We then started getting pretty curious about it and started doing research about raising emus.

We thought that getting a pair of emus would be ideal. However, the seller had the emu eggs listed with about fifty per cent fertility chance so we decided to get four of them.

And that was the beginning of Paul’s adventures.

The chicken egg is puny compared to the emu egg which is about fourteen times bigger.

This was the only emu that hatched. She came out very weak that we were unsure of her survival. We even had to help it out of its shell. Getting the hatching process wrong came to mind, we were at fault, and that we’re responsible for not getting two eggs hatched the very least. But we all tried to the best of our abilities and even did numerous researches about it, still thankful that we got one though.

After a week, the baby emu started looking a lot healthier. We named her Paul before realising that she is possibly a female.

After about two weeks since Paul hatched, we brought her for a drive down south. Originally, we planned to drive down south alone for a few days; however, no one was available to look after Paul so we tagged her along. The trip sure was fun despite it being incredibly messy.

Paul was about six weeks old in this photo. Her baby feathers are beginning to disappear, revealing a slight view of her ear holes.

After being in the university for a couple of months, Paul has grown quite a lot. The lovely stripes along her head and neck are not visible anymore. The feathers on her back started getting darker.

This photo was taken on her second time to the vet. We thought she was a bit worse for wear the first time we took her to the vet.

One evening, Paul suddenly couldn’t get herself to walk. She also didn’t eat or drink.

Then we found out that Paul actually got a terrible bacterial infection that she’s been keeping from us for a while. The vet informed us that due to the situation being very bad, Paul might not be able to live. Fortunately, one of the local vets knew a reasonable amount of information about big birds since he used to work with ostriches in South Africa. Hence, they never hesitated to treat Paul.

The vets enjoyed working with Paul so much that they did not charge us for anything besides the supplies being used. We were so moved with what they did.

Paul did not seem to grow during the entire period of her illness which took her about two weeks of recovery. However, here she is looking a lot healthier.

Most days, Paul likes to spend her time with our chickens.

On other days, she likes to spend her days with the farm dogs. In the morning, Paul will run through the mire with Jack the Border collie and Tillie the spaniel, in fact, we think that she thinks of herself as a dog. She would mimic the dogs and would eagerly roll over for us to scratch her belly.

Now, Paul is almost at her largest. She will keep growing for another year. Appearance wise, her head and neck are starting to turn blue.

My apologies for the quality, but this one’s too good not to include. 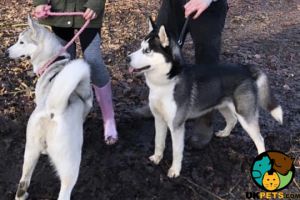 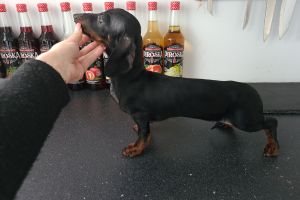 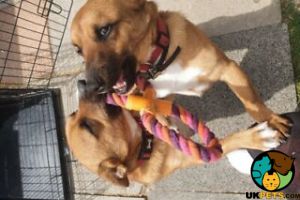