Searching for a Bramble?

The Bramble cat possesses an exotic look of beauty and is currently only registered in the Rare and Exotic Feline Registry (REFR). The desired trait of the successful breeding is to have a wired coated cat with a longer body much like the Bengals. Moreover, it aims for wild instincts but with tender personality. To achieve such personality and appearance, the breeder initiated breeding the Bengal with the Russian Peterbald. At first, a few selected breeds are accepted in the breeding programme to attain genetic diversity.

This is a unique breed that has a very strong personality from the Bengals with a mix of being affectionate from the Peterbald. The Bramble retains its agility, athleticism, and the love to hunt. Thus, it enjoys the thrill of hunting even if it is ‘play’ hunting. It is also easy to train that it may be possible for it to be leashed during walks.

Are you interested in getting a Bramble? Here is a brief background of this exotic and beautiful cat.

In about 2007, the Bramble is a breed from the US and was introduced by its founder, Gary Bramlett, owner of the Magnoliachat cattery. The Bramble was named after Bramlett himself and was created at his cattery. The two main breeds used are the domesticated spotted Bengal and the bat-eared brush coated Peterbald. Taking a careful choice in breeding, Bramlett achieved its desired breed with an exotic large feline having nice temperament and personality.

To ensure its gene lines and to have a diverse genetic pool, the breeding programme ventured to other selected breeds. As a result, the breed may produce a variety of coats. However, outcrossing the breed was only permissible for a few years, because at present, the desired breed characteristics have been well established. The Bramble is relatively new having been only registered in the Rare and Exotic Feline Registry. Moreover, it is still on its way for acceptance to other cat registries, mainly TICA.

This breed has a large and a very muscular body. It is larger compared to the usual domestic cats. Though it is not stocky, the Bramble cat is heavier than the Oriental. It also has a moderately long tail and is fairly thick at the base complementing its body structure. It has large paws with defined toes.

Further, it has large eyes that are almost almond in shape but is a little more rounded. It also has large ears that may flare out to the side of its head. It has an almost round circle shaped muzzle with a very firm chin. Each feature is proportionate to the cat’s size.

The Bramble cat has the close resemblance of the Bengal cat. The noticeable difference between the two breeds is the Bramble’s wired coat. Its coat is similar to the coat of a Wire Haired Fox Terrier dog which is its unique feature in the cat’s world. It has a variety of coat types but the rosette or spotted ticked wire coat is the most popular which is inherited from the Bengal. There is no limit with the breed’s colour; however, the pattern should remain visibly clear under the wiry coat. It is usually only noticeable in the light. If it has a solid pattern, its wiry coat should be noticeable.

As it sheds lightly especially Bramble cats having no undercoat, this breed requires less grooming. Complete grooming with the basics such as nail trimming, teeth brushing, and ear cleaning. The earlier the grooming routine is introduced, the better.

As previously stated, the breeding of the Bramble cat is aiming for it to have lovely temperaments despite its wild instincts. True enough, the Bramble has a good relationship with people. This is a trait rooted from the Peterbald. It is unaggressive and would long to be a part of the family. However, it has the tendency to pick one person as a favourite. Regardless, having an extrovert personality, it is friendly towards everyone in the household including strangers. On the other hand, the Bramble cat has a strong pull to hunt. It retained its hunter skills from the Bengals. At times, it can be very determined to have a successful hunting in catching its prey. It enjoys play hunting or pretending at home with toys treated possessively. It is rather typical for a Bramble cat to claim toys and would take it to their food bowl as a declaration of ownership.

The Bramble cat is known to be fearless and can move at lightning speed. It is fascinating for a domesticated cat to have an incredible speed that can quickly off the mark. Such a trait is very helpful when this feline hunts.

The Bramble cat should be provided a nutritious diet that fulfils its nutritional needs. It should be consistently given the same food following the same feeding schedule. If there are changes to its diet, those must be done gradually to prevent digestive problems.

Being a relatively new breed, the Bramble cat’s life span is not yet known. There is no information on hereditary health problems at the moment and is believed to be a robust feline.

The Bengal’s blood in Brambles, making them agile and athletic. This means that this breed is active and its exercise needs are the same as Bengals’. A good variety of interactive toys and climbing towers would keep them from becoming bored and overweight.

As it is yet to be recognised to cat registries, it is unlikely to find a Bramble breeder, acquiring one takes considerable time. Details on monthly costs along with other pet care costs largely depend on the area and the special needs of the said feline. 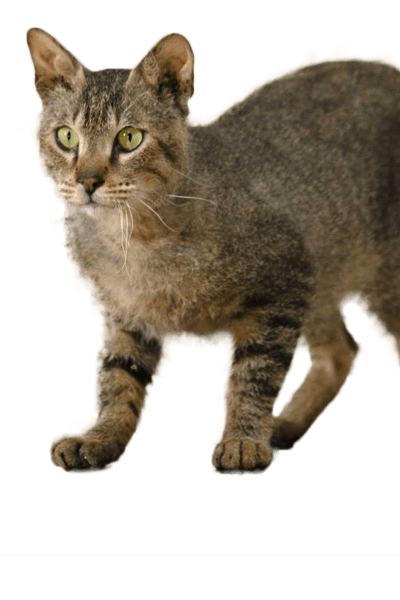 Are you sure the Bramble is the best breed for you? Take the Pet Breed Selector Quiz to find your perfect breed match.

Is the Bramble your purrfect match? Take our Cat Finder so you can find the most suitable breeds for you.

Cat Finder
Disclaimer:
The information, including measurements, prices and other estimates, on this page is provided for general reference purposes only.
Bombay
British Longhair
Contents
Not the breed you're looking for? Click Here
Latest Stories

Dog breeds come in different price tags. However, a cheaper breed of dog does not mean you will get less for your money. We have listed down the 10 … END_OF_DOCUMENT_TOKEN_TO_BE_REPLACED