Looking for an Egyptian Mau?

The rare, beautiful, and very intelligent Egyptian Mau is the fastest pedigreed feline in the world. It has been known to reach speeds of 30 mph, thanks to its cheetah-like build. It loves its humans, but is wary of strangers. With its possessive streak, the Mau has a tendency to seek attention from its humans. It makes for a wonderful pet for families.

Are you interested in getting an Egyptian Mau? Here is a brief background of this compact and elegant breed.

The Egyptian Mau’s silhouette is a familiar figure on ancient Egyptian wall depictions, which indicates how old this feline breed is. It is believed to be the domesticated descendant of the wild African cat.

Although named as such, there is no certainty that this exotic-looking cat did originate from Egypt. DNA tests revealed that the Mau, which is derived from the Middle Egyptian term mjw (“cat”), may actually be from Europe. As such, this breed’s origins remain mysterious.

The exquisite attributes of this kitty did not go unnoticed in the West. In the 20th century, some fanciers began to breed it. World War II dealt the breed a serious blow and its numbers began to decline. Egyptian Mau breeders from Canada, the US, and Europe stepped in to save the Mau from extinction. In the 1950s, Natalie Trubetskaya, a Russian princess, helped keep the feline breed afloat. She established an Egyptian Mau cattery, which produced a good number of the ancestors of the Maus currently in America today.

The UK was introduced to this beautiful feline only in the 1990s, when Melissa Bateson imported one. Although the Egyptian Mau was recognised by the Cat Fanciers’ Association in 1977, it was only acknowledged by the Governing Council of the Cat Fancy (GCCF) in 2006.

Today, the Mau is popular in various countries. In the UK, the breed is relatively rare, with only about 300 kittens registered annually.

Elegant and graceful, the Egyptian Mau makes for an excellent show cat. Its medium-sized muscular body and limbs are shaped like the cheetah, the fastest of all land animals.

This breed has a wedge-shaped, rounded head. Its almond-shaped ears may range from medium to large and are broader at the base. Its large eyes are expressive, bright, and gooseberry green. The “mascara” eyes are known to change to an unusual hue as this kitty matures. Parallel lines run down each side of its nose, enhancing its exotic look. Its forehead has an “M” marking.

Its long body is so well-muscled that it is hard to the touch. It has a skin flap that begins from its abdomen and ends on the hind knee. This, together with its long back legs, allows it to move in a wider range of motion. As such, it can reach speeds higher than those of other cats. Its hind legs are longer than the front ones and are proportionate to its frame. Its paws are small and round. Its gently tapering tail is moderately long.

The Egyptian Mau’s coat is beautifully spotted and shorthaired. It is one of the very few domestic cat breeds that are naturally spotted. Other spotted felines have been intentionally bred to acquire the decorative colouring. The spots can be oblong, round, or irregularly shaped. These spots can also be large or small in size and only occur on the edge of the fur.

The dense, medium-length coat is close-lying, with colours including bronze, silver, and smoke. Grooming is easy with the Egyptian Mau because of its short length. It tends to shed, but this can be easily remedied with weekly brushings.

The Egyptian Mau is playful and humorous, making it a wonderful domestic companion. It likes playing with and in water and leaping to impressive heights. It prefers to perch on a high place and observe its domain from this vantage point.

A very active kitty, the athletic Mau also likes to chase toys and engage with its humans. It dislikes being left alone for long durations. It tends to become possessive of its toys and even of its humans. If not socialised early, it will not tolerate living with other pets due to its possessive streak. It gets along with children but is not as tolerant with very small kids that are too rowdy.

The Mau can also be quite talkative and has a wide range of expressions. It can make use of its paws and tails, aside from its extensive repertoire of feline vocalisations, to express its dissatisfaction. However, it is shy around other people or animals it does not know. Considered as a very intelligent cat, the Mau learns quickly and likes to be mentally stimulated. It chases and hunts toys to keep itself occupied.

The Egyptian Mau should be provided with a nutritious diet that fulfils its daily requirements. It should be consistently given the same food following the same feeding hours. If there are changes to its diet, those must be done gradually to prevent digestive upset.

The serving portions should depend on the Mau’s weight, age, and activity level. Its meals must include at least 25% protein and just 5% carbohydrates.

Egyptian Mau cats usually have a life span of 9-13 years, but some can live up to 16 years. It is generally considered as a healthy breed except for being prone to patellar luxation and periodontal disease as they age. Egyptian Maus are also likely to develop skin sensitivity, pyruvate kinase deficiency, and umbilical hernia than other cat breeds. Regular vet visits and proper care could help an Egyptian Mau avoid these diseases.

Egyptian Maus are extremely extroverted and highly active felines. Their exercise requirement is easily achieved as they like to climb and jump. They are playful, love to interact with their owners, follow them around, and seek them out for a game of fetch.

It is best to devote time for daily play sessions as Maus tend to get attached to their humans. In case they need to be left alone at home, make sure they are provided with cat trees - the taller, the better. They also need different interactive toys to keep them mentally stimulated.

How much is an Egyptian Mau? A well-bred Mau kitten will cost at least £300. Average insurance expenses would cost £16 (basic) or £25 (lifetime) monthly. Food costs may range from £15-£20 each month. For vaccinations, boosters, annual checks and other veterinary costs, pet care costs may add up to more than £500 each year.

On average, an Egyptian Mau owner will spend about £30-£50 per month. The insurance costs can also affect this estimate. For its entire lifetime (13-16 years), the expenses can be as low as £4,680 to as high as £9,600 overall. This estimate does not include the initial costs incurred in acquiring this cat. 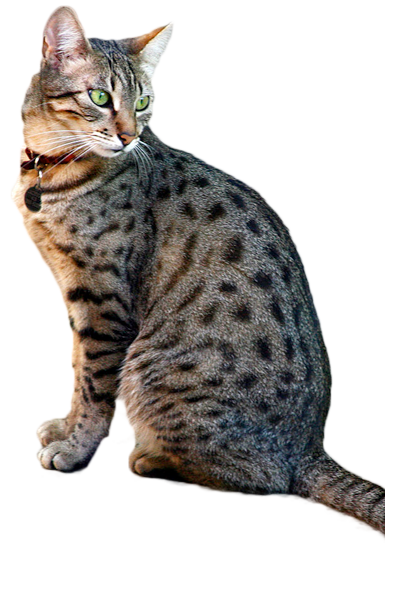 Are you sure the Egyptian Mau is the best breed for you? Take the Pet Breed Selector Quiz to find your perfect breed match.

Is the Egyptian Mau your purrfect match? Take our Cat Finder so you can find the most suitable breeds for you.

Cat Finder
Disclaimer:
The information, including measurements, prices and other estimates, on this page is provided for general reference purposes only.
Devon Rex
Exotic Shorthair
Contents
Not the breed you're looking for? Click Here
Latest Stories

Abnormal dog behaviours are often overlooked during their early stages. Many dog owners misinterpret these behaviours. As a result, dogs end up in … END_OF_DOCUMENT_TOKEN_TO_BE_REPLACED