Thinking of buying or adopting a Korat?

The Korat has a mystical background and was discovered in Thailand. Its native Thailand name is “Si-Sawat”. “Si” means colour and “Sawat” means prosperity or money. When translated literally, “Si-Sawat” means the colour of money. In the past, it was not sold but was a favoured gift. It was given as a present for newly-wed couples and farmers for prosperity and good luck. As such, the Korat cat is considered a valued possession.

If you believe in such a symbolic significance, this domestic feline is perfect for you as it enjoys following its owner closely, ensuring luck at your side at all times. A gorgeous purebred that brings good fortune is certainly a great addition to the family.

The Korat made it to the preserved records of the Bangkok National Library called “Tamra Maew” or The Cat-Book of Poems. It is a manuscript depicting seventeen cats, whose ownership brings good fortune, and six that are said to be omens. The Korat was listed under the good luck cats. The collection of poems is said to be traced back 600 years ago, which makes the Korat one of the ancient breeds.

The Korat was first introduced in America in 1959. Two Korats named Nara and Darra were offered by a Thai breeder to the Johnsons. The breeder received the cat as a gift when he retired from the Foreign Service in Thailand. The pair was brought by the wife, Mrs Jean Johnson, to the US. Since then, there were many Korat cats that were imported from Thailand, hence, they earned the moniker “silver-blue cat with the Thai passport”.

There were instances where the Korat was crossed with the Siamese. However, kittens having no blue coats were never registered as Korats as they do not fit the same descriptions as the original breed. Nevertheless, the Korats may produce Siamese or lilac kittens over the years because of the crossbreeding in the past.

These strikingly silver blue cats may have gained popularity over the years, but the breed remains rare even in Thailand. After the establishment of the breed standard with a policy of no outcrossing, they became known as the “natural” blue coated cats.

The Korat cat is a medium size feline with a medium tapering tail to a rounded tip. A male Korat is muscular that can weigh from 8 to 10 pounds, whilst the female is daintier and can weigh from 6 to 8 pounds. It is heavier than it appears as it has a strong chest with well-developed muscles. When the Korat is in a sitting position, the muscular area of the chest appears to form a heart shape. The ears appear large with rounded tips.

One of its impressive features is its eyes, which has a brilliant green colour that resembles that of young plants. The green colour is said to signify a good harvest. The eyes appear large, well-rounded when fully opened and luminous. Korat kittens and adolescents may have yellow or amber to amber-green eyes. Its lips are dark blue or lavender.

The Korat is considered as a shorthair feline. Its glossy hair can be short or medium in length and fine to the touch. Another distinct feature is the cat’s coat having a silver sheen with hair lighter at the roots. The GCCF coat’s standard on Korat is any shade of blue having silver on the tips. Silver tipping is intensified at about two years old.

As with the other shorthair felines, this breed requires less grooming with weekly brushing. You only need to give grooming more attention when the Korat sheds its winter coat.

The Korat is demanding yet very affectionate to its owner. It demands attention and would expect to be included in any activity the owner is engaging in. It enjoys snuggling and any form of physical contact with people. It cannot handle being left alone. It is friendly to other cats or animals but would prefer the company of other Korats.

Because of its high intelligence, the Korat is easy to train. It can perform a trick of fetching toys and can do well with puzzle toys. As it adores human contact, it enjoys interactive games. It can be kept as an indoor pet but should be provided with its own space to play and to snuggle. If not, this feline may be destructive when left bored and alone.

The Korat has a more heightened sense of hearing, sight, and scent compared to the other cat breeds. As such, it is a sensitive cat that is not fond of loud noises.

The Korat cat should be provided with a nutritious diet that fulfils its nutritional needs. It should be consistently given the same food following the same feeding schedule. If there are changes to its diet, those must be done gradually to prevent digestive problems.

The Korat cat normally lives for 11 to 15 years and some may even live up to 19 years. This cat breed is generally considered healthy. Although uncommon, some Korats may develop hereditary health issues such as GM1 and GM2 gangliosidosis. Before getting a Korat, find a breeder that ensures that the feline is tested before putting her in a breeding programme.

The Korat likes to be involved in activities that the family members do, she likes following their owners around the house all day. She is a relatively active and lively cat that enjoys lots of playtimes. Owners need to spare time to play with Korats to keep them happy. To challenge her physical and mental abilities, she can be provided with various high activity toys. The Korat is good at learning tricks, as it helps to challenge and sharpen her mind.

A pedigreed Korat kitten will cost at least £250. Average insurance expenses would cost £16 (basic) to £25 (lifetime) monthly. Food costs may range from £15-£20 each month. For vaccinations, boosters, annual checks and other veterinary costs, pet care costs may add up to more than £500 each year.

A Korat cat owner will spend about £30-£50 per month. The insurance costs can also affect this estimate. For its entire lifetime (15-18 years), the expenses can be as low as £5,400 to as high as £10,800. This estimate does not include the initial costs incurred in acquiring this cat. 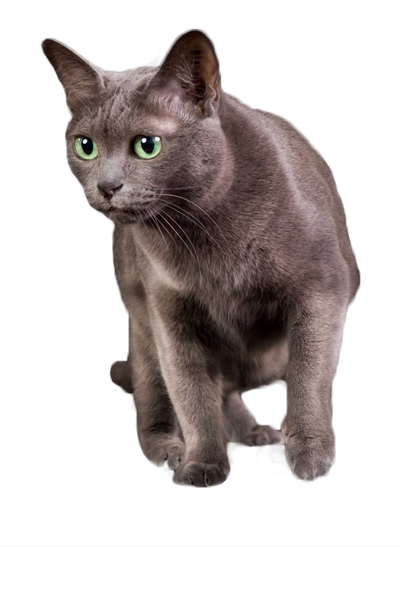 Are you sure the Korat is the best breed for you? Take the Pet Breed Selector Quiz to find your perfect breed match.

Is the Korat your purrfect match? Take our Cat Finder so you can find the most suitable breeds for you.

Cat Finder
Disclaimer:
The information, including measurements, prices and other estimates, on this page is provided for general reference purposes only.
Khao Manee
Kurilian Bobtail
Contents
Not the breed you're looking for? Click Here
Latest Stories

Australian Shepherds were bred to be herding dogs that can withstand cold climates. They sport dense and thick double coats that provide them warmth … END_OF_DOCUMENT_TOKEN_TO_BE_REPLACED