Thinking of buying or adopting a Savannah?

The Savannah cat was created by crossing a domestic cat and a wild cat called the African serval. Other cat breeds such as the Bengal and Oriental shorthair were also used to develop the Savannah cat. In 2012, the International Cat Association (TICA) officially recognised the breed.

This hybrid cat is fun-loving and devoted to her human companions. However, she can be indifferent towards strangers. Her adventurous streak and high intelligence make her easy to train. On the other hand, this also causes her to pull hilarious and exasperating tricks on her humans.

To keep her entertained, she requires enough of playtime and a wide assortment of toys. The Savannah cat is low-maintenance and only needs minimal brushing. The breed can live up to twelve to fifteen years if she is well-cared-for.

How did the Savannah cat's origins start?

The Savannah cat is a descendant of the African serval cat, a wild African cat that was bred in captivity since the 1920s. The F1 Savannah cat or the first generation of the breed was born in April 1986. She was named 'Savannah,' after the African grassland that was the home of the serval's progenitors.

The kitten's parents are a Siamese seal-point cat and a serval cat, who were owned by Judee Frank and Suzy Wood respectively. The unexpected creation of the beautiful litter of Savannah kittens drew the attention of Patrick Kelly. He wanted to create a new breed of a domestic cat. So, he brought home one of the kittens and asked for the assistance of Joyce Sroufe, a cat breeder, to make his idea come true.

What does the Savannah cat breed's generation mean?

A generation stands for the number of pairings removed from the African serval cat. The letter F in the upcoming explanation means filial. It refers to the specific generation of the cat.

The Savannah cat has a triangular head, elongated neck, and big, wide ears. Her medium-sized eyes can be any colour, whilst her nose leather may come in colours of pink to black.

However, a black Savannah cat should have a solid black nose leather. This hybrid cat has a notably tall and lean body and medium-length tail. She has long legs, with her hind legs a bit longer than the front legs.

This cat's coat has a wide range of colours and patterns. These include black, brown, black smoke, brown spotted tabby, and silver spotted tabby. Most have dark brown or solid black spots on cream, golden, sandy, and white backgrounds.

Meanwhile, a black Savannah cat appears to have only one coat colour. However, there are underlying spotted patterns or black spots that can be seen, which are referred to as ghost patterns.

The cat has distinctive solid and bold markings. These can be elongated, round, or oval. Some possess a marble pattern that is characterised by spots akin to an elongated bullseye.

Others sport colours and patterns that are excluded from the breed standard. These include blue, chocolate, cinnamon, colourpoint, and red.

How big do Savannah cats grow?

A full-grown savannah cat is a large feline. Her full size depends on what generation she falls into. Here are the respective Savannah cat sizes based on their generation:

What is the biggest Savannah cat?

Two Savannah cats were able to snag the Guinness World Records title for Tallest Domestic Cat. In 2013, Trouble, a 19-inch-tall Savannah cat, was the first to win the title. Four years later, another Savannah cat named Arcturus ranked first as he measured just over 19 inches tall.

How to care for a Savannah cat

The Savannah cat is a low-maintenance feline. Her short medium-length coat only requires once a week of brushing.

Check her ears weekly for any signs of infection or wounds such as foul odour, redness, and inflammation. Also, take this time to clean the ears if they become too dirty. Trim her nails weekly as well. Daily brushing of her teeth is greatly encouraged to prevent periodontal diseases.

A domestic Savannah cat is an extremely adventurous and enthusiastic feline. She loves to be in action rather than lazing around the house. She forms a strong bond with her owners and needs a lot of interaction. Her vivaciousness makes her a great companion with other pets, provided that they are properly introduced.

Although she is fun to be around, sometimes she can also be a handful. Her curiosity can lead her to play jokes on her humans. For example, some learn to turn off alarm clocks. That's why they are best suited for cat owners with experience.

The Savannah cat possesses a dog-like personality. She loves being around humans, and it is common to see her tail her loved ones from room to room.

This hybrid cat is very loyal and protective of her family as well. It would take some time for her to warm up to strangers. To prevent her from becoming too wary of new faces, she should be socialised with different people and pets at an early age.

The Savannah cat is one of the most highly intelligent cat breeds. She can learn new tricks and is trained to walk on a lead. Using positive reinforcement coupled with clicker training, is an effective way to train her.

Her smartness also has its drawbacks since she loves to commit mischief. Therefore, patience and understanding are necessary when caring for this hybrid cat.

What should Savannah cats eat?

The Savannah cat may have wild cat genes, but she has the same nutritional requirements as domestic cats. Reputable cat breeders will provide a feeding schedule, so make sure to stick with it. Avoid sudden diet changes as it can result in stomach upset.

It is worth noting that the breed is prone to taurine deficiency. Working with the vet will help you figure out how to help your cat avoid this health condition. In most cases, vets will suggest a taurine supplement, whilst others may recommend opting for a grain-free and high-protein diet.

The Savannah cat can live up to 12–15 years, but some are known to even reach the ripe age of 20. Ensuring that your Savannah cat has a stress-free home environment, balanced diet, and daily exercise and interaction are some of the most important factors that will aid in prolonging her life.

There are no well-established health problems when it comes to the Savannah cat breed. However, this hybrid cat is still susceptible to infectious diseases like most domesticated cats. Regular check-ups and completing necessary vaccinations play a significant role in protecting her from illnesses.

The Savannah cat is highly intelligent and full of energy. It is crucial to provide her with lots of interactive toys, especially puzzles, as she is great at problem-solving. Make sure that these toys are durable since she can play rough sometimes.

The Savannah loves to play. Playing fetch and hide-and-seek are some of the activities that you can do with a Savannah cat. These activities will keep her busy as well as sharpen her mind.

How expensive are Savannah cats?

It is worth noting that only F2, F3, and F4 Savannah cats are legally available to buy from reputable breeders in the UK. Ownership of an F1 Savannah cat is prohibited. Cat owners that want to have this cat need to acquire a Dangerous Wild Animal Licence first.

How much is a Savannah cat?

As mentioned earlier, the price range may vary depending on the type of Savannah cat that you want to get. It can be as low as £500 or a whopping £9,000. The total annual cost for a Savannah cat's food is around £150 to £260.

Routine vet visit expenses are around £30 to £60 a year. The first round of vaccinations will require you to pay approximately £100, whilst annual boosters cost at least £50. If you acquire pet insurance, it will cost between £170 and £400 each year depending on what type of insurance you'll choose.

Most Savannah cats love water and even enjoy swimming. Some cat owners shared that their Savannah cats often join them in the shower.

Savannah cats are high jumpers. They can jump to a height of at least eight feet. When outside, it is important to keep an eye on them as they can easily escape a low-fenced yard.

Are you sure the Savannah is the best breed for you? Take the Pet Breed Selector Quiz to find your perfect breed match.

Is the Savannah your purrfect match? Take our Cat Finder so you can find the most suitable breeds for you.

Cat Finder
Disclaimer:
The information, including measurements, prices and other estimates, on this page is provided for general reference purposes only.
Russian Blue
Scottish Fold
Contents
Not the breed you're looking for? Click Here
Latest Stories

Abnormal dog behaviours are often overlooked during their early stages. Many dog owners misinterpret these behaviours. As a result, dogs end up in … END_OF_DOCUMENT_TOKEN_TO_BE_REPLACED 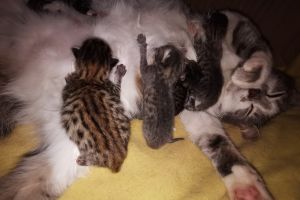 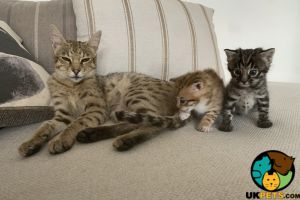 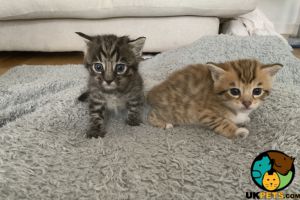