Thinking of buying or adopting a Sokoke?

The Sokoke cat breed is one of the rarest domestic cats in the world. It is a naturally occurring breed that developed on its own in the forest of Arabuko Sokoke in Kenya. It was once called “Khadzonzo” by the Giriama natives, the first owner of the said breed.

Despite originating from the wild, the Sokoke has a domestic nature. The Sokoke is an active and enthusiastic cat. It gets along very well with children and other animals, so it makes for a good family pet. It forms an exceptional bond with its owner and has the ability to read human emotions.

The Sokoke’s ancestor is a mystery. Genetic tests revealed a common DNA with cats from the island of Lamu, Arabian wildcat, and the street cats of coastal Kenya. Even though it shares some of the common traits of the aforementioned breeds, the Sokoke has its own distinctive feature. It is often described as a cat that looks like a tree bark, which is the English translation of “Khadzonzo,” its native name.

Apart from the Giriama natives, a horse breeder named Jeri Slater found a couple of Sokoke cats on her coconut plantation. Seeing its unusual features, Slater took an interest in breeding and developing the Sokoke.

In 1984, Slater’s friend Gloria Moeldrup brought the cats to Europe. It was eventually recognised as a breed in 1994 by the Fédération Internationale Féline (FIFe). Years later, it became popular among cat enthusiasts and breeders. Jeannie Knocker and her son were the first to bring Sokoke cats into the US in 2001. Eventually, the breed was accepted for registration in The International Cat Association (TICA) in 2004, and in May 2008, it received the status of “Preliminary New Breed.” But it wasn’t until 2015 when the breed reached the Preliminary Recognition by Governing Council of the Cat Fancy (GCCF).

As a medium-sized feline, the Sokoke can weigh between 8–12 pounds. Similar to other breeds, males are significantly larger than the Sokoke females. The Sokoke is an athletic cat with a long and muscular body. Its legs are long and slender with well-angled hind legs that it has a “tiptoe” gait. It has a muscular tail from base to the tip.

Its eye colour varies from amber to light green, with a black outline and appears slightly almond-shaped. The snow Sokoke usually has light blue or bluish grey eyes. The shape of its muzzle may appear bulky, which gives a smooth look on its frontal view with well-defined cheekbones. The head and ears are smaller in relation to its body.

Further, it has a very short coat that lies close to its body. Hence, it can be sensitive to cold temperature. It has an apparent coat of classic tabby markings. Ticking all over the pattern areas is its distinguishing feature as a breed.

Being a shorthaired feline, it requires little maintenance. Introduce brushing once a week along with the basic grooming, such as regular nail trimming, teeth brushing, and ear cleaning to your feline. The earlier these grooming routines are introduced, the better.

The Sokoke is not the type that would sit around and be a lap cat. Instead, it has a doglike trait, following its owner around the house. It is playful and active. It can be seen perching near a window, either observing the environment or waiting for the arrival of its owner.

Further, the Sokoke is intelligent, highly territorial, and is sensitive to human emotions. It is known to comfort its owner after a bad day. At times, the mood of its owner reflects its own. It is also described as vocal and talkative that it can converse with its humans for hours. It is also in their nature to form an unwavering bond with its owner or other pets in the same house. As such, it can have a tough time adjusting when someone in the family leaves or a new owner comes along.

One of its interesting behaviours is that the sire of the litter, if not separated, would help rear its kitten. In fact, it can often be seen lying down along with the Sokoke kittens and the queen.

The Sokoke cat should be provided with a nutritious diet that fulfils its nutritional needs. It should be consistently given the same food following the same feeding schedule. If there are changes to its diet, those must be done gradually to prevent digestive problems.

The Sokoke has a life expectancy of 9–15 years if well-cared for. This breed is amongst the healthiest with no known breed-specific health issues. However, the first generation of Sokoke that came from Kenya were prone to acquire infections. It seems these cases were resolved with the new generations of Sokoke cats.

Whilst the Sokoke is decently healthy, she may still be affected by health issues common to other cat breeds. It's important that she gets routinely examined by a vet to prevent major health problems.

The Sokoke has a reputation of being active and playful. She is often compared to dogs because she is smart enough to be trained to play fetch and learn tricks. The Sokoke is also very inquisitive and loves to follow her people around, always a step ahead or behind them.

When it comes to exercise, the Sokoke has no problem staying in motion. She has a strong need to expend her seemingly unlimited energy. She can climb, jump, and run for hours.

Because she is superactive, the Sokoke tends to have a strong appetite as well. Make sure to manage her diet well to prevent her from putting on unwanted pounds. It's also a good idea to provide a wide variety of toys and tall cat towers to keep her occupied when left alone.

A pedigreed Sokoke kitten will cost anywhere from £380–£750 and at times can be as high as £1500. Further, include vaccinations, boosters, annual checks, other veterinary costs, and pet care costs as part of the budget costing. As this is a rare breed, the monthly costs, insurance expenses, and specific costs largely depend on the area and the needs of the said feline. 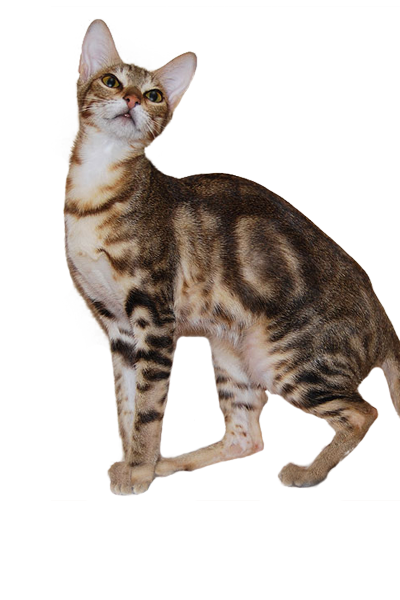 Are you sure the Sokoke is the best breed for you? Take the Pet Breed Selector Quiz to find your perfect breed match.

Is the Sokoke your purrfect match? Take our Cat Finder so you can find the most suitable breeds for you.

Cat Finder
Disclaimer:
The information, including measurements, prices and other estimates, on this page is provided for general reference purposes only.
Snowshoe
Somali
Contents
Not the breed you're looking for? Click Here
Latest Stories

Abnormal dog behaviours are often overlooked during their early stages. Many dog owners misinterpret these behaviours. As a result, dogs end up in … END_OF_DOCUMENT_TOKEN_TO_BE_REPLACED