Thinking of buying or adopting a Basset Bleu De Gascogne?

The Basset Bleu de Gascogne originated in the Gascony region of France in the fourteenth century and is a descendant of the old breed Grand Bleu de Gascogne. This aristocratic-looking dog is not a common breed in the UK. It is prone to obesity, so it needs regular exercise, and its food should be measured. It only requires weekly brushing, but it has to be bathed often to remove its strong doggy smell.

Are you interested in owning a Basset Bleu de Gascogne? Here is a brief background of this dog.

The details of how the Basset Bleu de Gascogne came about is unclear, but records show that this breed was around as early as fourteenth century at the Gascony region of France. It is believed that it is a direct descendant of the Grand Bleu de Gascogne. There are various stories regarding its origin, with some saying it was a natural mutation of the Grand, whilst others claim it is a cross between the Grand and the Saintongeois basset. It was raised as a slow and steady type of hunting dog that followed horses and hounds that went after boars and wolves.

The Basset Bleu de Gascogne almost became extinct in the nineteenth century as hunting declined, but the breed was saved by a man called Alain Bourbon. Although it was recognised by the Kennel Club and is a common breed in France, it remains a rare breed in the UK. It was later recognised by the United Kennel Club in 1991.Those who wish to own this delightful and loyal companion hound would have to be on a waiting list since only a small number of puppies are bred and registered annually.

The Basset Bleu de Gascogne is an aristocratic-looking hound that weighs 35–40 pounds and stands 34–42 centimetres at the withers. It resembles its basset hound cousin in terms of its short legs and long back, but the former is slightly taller and less bulky. It has a wedge-shaped head, slightly domed skull, and long, arched neck with excess skin forming a dewlap (although not as prominent as a basset hound’s). It has a long and broad nose with open nostrils that boast of a great scenting ability. Its oval eyes have a gentle and sad expression.

The Basset Bleu has a short, hard-wearing coat that only requires weekly brushing.  It has a strong doggy smelly because of its high oil production, which can be repulsive for some people, which is why it may need frequent bathing. You may need to ask a trusted veterinarian on how to control the odour. According to KC standards, the accepted colour should be black marked on a white base, which is entirely covered with black mottling that gives a blue effect.

Whilst it is important to take care of your dog’s coat, you also have to make sure that you do not ignore its dental health. Brush its teeth regularly and provide appropriate chew bones/toys that can help remove plaque and dirt. Its thick nails need frequent trimming. Also ensure that its skin isn’t irritated or infested with fleas.

The Basset Bleu de Gascogne is a loyal, affectionate, and playful scent hound with an easy-going character. It gets along with everybody, builds a strong bond with its family, and has a fondness for children, making it a valued family pet but a bad guard dog. Small animals are a different story because of the breed’s strong hunting instincts. It is better to avoid them completely.

It enjoys lounging around the house, and because it is generally laid-back, it is a good choice for inactive people. In fact, it will thrive in an apartment given that it has a fenced backyard where it can roam around. That being said, it still needs physical and mental stimulation to be a well-rounded dog. It is intelligent and highly trainable, but can be stubborn like a true-born hound. Praises and treats will help make training more manageable. Like most hounds, this breed has a musical voice that can annoy neighbours in urban areas, especially when it is left for long periods.

Although each breed may have a certain predisposition when it comes to temperament and intelligence, you have to understand that each dog is unique. Genetics, environment, socialisation, and training contribute to its overall characteristics.

A typical serving for an adult Basset Bleu is 1.5–2.5 cups of excellent-quality dry dog food per day. It is worth noting that the amount of food depends on its age, size, build, activity level, and metabolism.

The Basset Bleu is prone to obesity, so make sure that its food is measured and treats are lessened. Like most hounds, it needs animal protein (chicken, lamb, beef, and eggs) to support muscle development. Omega fatty acids will be beneficial for energy source and a healthy coat. For carb sources, avoid simple kinds used as fillers like wheat, corn, and soybean.

The Basset Bleu de Gascogne is generally healthy but prone to certain diseases like arthritis, intervertebral disc disease, gastric dilatation volvulus, and otitis externa. Do extensive research on reputable breeders so as to avoid purchasing a puppy with underlying health problems. As of now, there are currently no UK-registered Basset Bleu breeders.

This breed may be a lazy dog inside the home and it may not be built for speed, but it has high exercise needs and may exhibit destructive and noisy behaviour when not met. At least forty minutes of exercise is needed per day.

On top of the cost to purchase a puppy, you have to consider the initial expenses for beds, crates, bowls, leashes, collars, and toys, which are estimated at £200.

The estimated cost for high-quality food and treats is £40 per month. Professional grooming can set you back £30 per month. Set aside £1000 per year for regular vet checks, vaccinations, and medical care. Should you avail of pet insurance, expect to pay at least £20 per month for basic coverage or £50 for lifetime coverage. The average monthly cost of caring for Basset Bleu De Gascogne is estimated at £90 to £120. 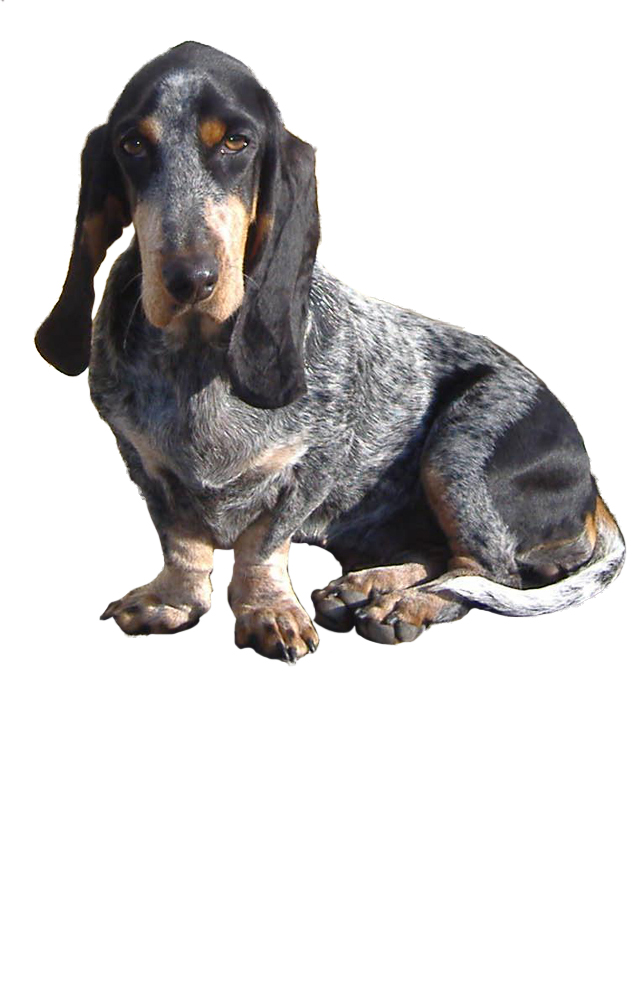 Are you sure the Basset Bleu De Gascogne is the best breed for you? Take the Pet Breed Selector Quiz to find your perfect breed match.

Are you having doubts if the Basset Bleu de Gascogne is right for you? Simply take our Pet Finder to determine the best breeds that suit your lifestyle.

Disclaimer:
The information, including measurements, prices and other estimates, on this page is provided for general reference purposes only.
Basenji
Basset Fauve De Bretagne
Contents
Not the breed you're looking for? Click Here
Latest Stories

Socialising adult dogs may seem like a daunting task as some full-grown pooches are set in their ways. However, all hope is not lost. There are many … END_OF_DOCUMENT_TOKEN_TO_BE_REPLACED