Searching for a Bavarian Mountain Hound?

The Bavarian mountain hound is a scent hound bred to hunt and track wounded prey from a live game. It is a cross-breed between the Hanover hound and the Bavarian hound. It is a German breed originally utilised as a working dog, but later became popular as a family pet. The Bavarian mountain hound is an intelligent, calm, and poised dog. It is known to be highly devoted to its families and suffer from separation anxiety. It has a lifespan of ten to fourteen years.

Are you thinking of getting a Bavarian mountain hound? Here is a brief background of this German scent dog.

The Bavarian mountain hound was developed by the Baron Karg-Bebenburg, Reichenhall in the 1870s in Germany as a scent hound. This medium-size dog breed was developed by crossbreeding the Hannoversche Schweißhund breed and hunting dogs from the Alps. The breed was used as a blood tracker, locating injured big game after being shot using imprecise weapons.

The BMH weighs 44–55 pounds and stands 44–52 centimetres at the withers. Its appearance is similar to other scent hounds, but it is more lightly built. It has a moderately broad head, flat skull, and heavy, droopy ears. Its body is relatively long and muscular.

Its coat is short, dense, shiny, harsh, and close-fitting that is finer on the head and ears. It is harsher and longer in the tail, legs, and abdomen. According to the Kennel Club, the standard colours are deer red, tan, or fawn, which may be combined with black or brindle. Generally, the colours get deeper in the back and tail. A mall and light-coloured patch on the chest is acceptable.

The Bavarian mountain hound’s coat is easy to groom as it only requires weekly brushing to remove mats. It is a light shedder and bathing can be done as needed when it starts to have that doggy smell. Its droopy ears need to be thoroughly cleaned to avoid irritation and infection.

The BMH is a docile, calm, poised, intelligent, and devoted breed. It can be wary of strangers, but it is generally not aggressive. Its impressive scent and hunting ability is paired with dedication, persistence, quickness, and agility.

This breed forms a very strong bond with its owners and tends to have separation anxiety when left alone for hours. It is a good family dog that tolerates children. However, interactions with very young kids should always be supervised to avoid getting hurt because of overexcitement.

It is not for first-time and timid owners because it can present training difficulties and dominance. It is important for owners to establish their alpha role. Training should include controlling its strong tendencies to chase and attack/kill small animals. If trained well and socialised early, this breed is a generally good around other dogs and would rarely show aggression.

Early training and socialisation cannot be stressed enough with the Bavarian mountain hound. This is the only way dog owners can suppress or control its wilder tendencies it is predisposed to due to its genetic make-up. It is important to note that regardless of its predisposed temperament typical of its kind, several factors affect its personality growing up.

A typical serving for an adult Bavarian mountain hound is one to two cups of excellent-quality dry dog food per day. Since each breed is unique, the amount of food depends on its age, size, build, activity level, and metabolism. Apart from understanding the breed’s basic nutritional requirements, learn the individual needs of your pet.

Developed as a scent hound that works hard, choose a type of food that contains high-quality, animal-based protein. It thrives on meat like lamb, beef, and chicken, which will support strong muscles to ensure healthy weight and mobility. To prevent bad breath and dental problems, choose dry dog food that reduces tartar build-up. Experts recommend small, frequent meals and prebiotics since it is prone to bloating and stomach issues. Omega-3 and omega-6 fatty acids from fish are also needed for a healthy coat. For a breed prone to hip and elbow dysplasias, you must also provide it with vitamins and minerals for joint health.

The average lifespan of the BMH is ten to fourteen years. The breed is generally healthy but predisposed to certain health conditions. These include hip dysplasia, elbow dysplasia, entropion, ectropion, retinal dysplasia, and progressive retinal atrophy. It is also prone to have ear infections and skin problems like demodicosis.

This very athletic and active dog requires vigorous physical activities. When its daily exercise needs are not met, it has a tendency to be destructive and hyperactive. It will thrive on a minimum of one to two hours of exercise per day. It enjoys jogging with its owners and running in an enclosed area. It is also best to provide it with opportunities to hunt or engage in mental activities.

There are only a few breeders that produce well-bred Bavarian Mountain Hound puppy so expect a long waiting list that could take months. Typically, a pedigree puppy from a KC-registered breeder costs anywhere from £450 to £600. Expect to pay a lot more for a rare breed.

Food expenses, including treats, typically range from £60 to £70 per month. Set aside at least £1,000 per year for regular vet consultations, vaccinations, boosters, and other pet care expenses. This does not include special treatments for certain health issues.

Costs of pet insurance will depend on the coverage. For basic coverage, prepare to spend about £70 monthly, while a lifetime policy will set you back about £130 a month. Given all these cost considerations, the monthly cost of keeping a Bavarian Mountain Hound is anywhere from £150 to £190. 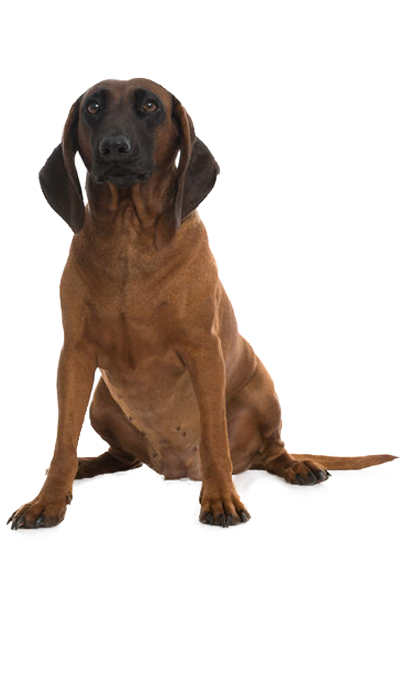 Are you sure the Bavarian Mountain Hound is the best breed for you? Take the Pet Breed Selector Quiz to find your perfect breed match.

Can’t wait for a Bavarian mountain hound dog to be available? Take our Pet Finder to see other dog breeds that may suit you.

Disclaimer:
The information, including measurements, prices and other estimates, on this page is provided for general reference purposes only.
Basset Hound
Beagle
Contents
Not the breed you're looking for? Click Here
Latest Stories

There is a dispute about the puppy training pads’ effectiveness in potty training. Some attest that they helped pups move forward in training, whilst … END_OF_DOCUMENT_TOKEN_TO_BE_REPLACED 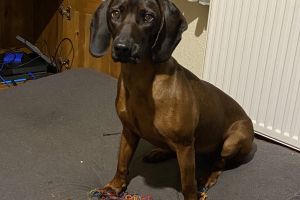