Thinking of buying or adopting a Boerboel?

The boerboel, also commonly known as South African mastiff, bole, or boer, is an imposing and powerful-looking dog originally bred as a working farm dog. It stands 59–70 centimetres and weighs 110–175 pounds. Stocky and impressive in appearance, this dog breed is actually gentle as long as it's socialised and adequately trained. The boerboel is ideal for a person or family who is experienced with dogs. It needs to be given plenty of time for training, playing, and exercising. Boerboel has a short and smooth coat that is shiny.

Are you looking to own a boerboel? Here is a brief background of this superimposing but gentle farm dog.

A little uncertainty shrouds the real history of the boerboel. However, it is believed that the breed first came about in the mid-1600s when settlers from Holland, Germany, France, and England took their dogs with them to South Africa. There, they started to cross-breeding their dogs with the native African landrace dogs, such as the Africanis.

According to reports, a Dutchman named Jan van Riebeeck came to Cape Horn, South Africa in 1652, and with him was a dog tasked to protect his family. This Dutch dog was called ‘bullenbijter,’ which roughly translates to ‘bull biter.’ It was a huge, muscular, mastiff-type dog with guarding and protective instincts, and it was bred with various local dogs. This breed was the early descendant of the boerboel.

In the early 1900s, the bull mastiff breed was also brought to South Africa by a large diamond mining company, De Beers, to guard their valuable mines. These dogs were also cross-bred with the boerboels of that time, thus contributing to its evolution.

In 2015, the American Kennel Club had classified the boerboel as a working dog and was granted full recognition. However, this dog breed has yet to be recognised by the Kennel Club despite its growing popularity in the UK.

The boerboel is a giant-sized, muscular, and sturdy dog with a strong bone structure. The head looks like a huge block, broad and square with a flat skull. The boer has a strong neck, shoulders, and huge hindquarters, boasting of a powerful, boned back legs and well-developed upper thighs. It also has a deep chest that is wide and broad with well-sprung ribs. It has a black facial mask covering the muzzle up to the eyes. It stands 59–70 centimetres and weighs 110–175 pounds. However, despite its impressive and bulky appearance, it is agile and athletic.

When it comes to coat colours, boerboel sports various shades of red, brown, black, fawn, or brindle. Its coat is short, dense, smooth, shiny, and smooth. It may also have white markings on the legs or chest. This dog breed is a moderate shedder, so it is low-maintenance. However, the boerboel needs to be groomed on a regular basis. Brushing its coat once a week will do to remove dead hair and keep its coats clean. It doesn't require frequent bathing since too many baths can dry out the dog's skin and make it flaky.

Its ears should be checked and cleaned regularly to prevent wax build-up and dirt which may lead to infection. Teeth should be regularly brushed to maintain oral health and avoid the accumulation of tartar. Also, check for ticks and fleas especially during warm weather.

Often described as a gentle giant, the boerboel is affectionate and playful toward its owners. It is incredibly loyal and intelligent with a strong desire for human companionship. Bred as a real worker, the boer is obedient but it is a natural leader. It is also great with children and tends to be fiercely protective. Still, it would be ill-advised to leave any child unattended around any dog. The boerboel is also very territorial. However, if socialised early, it gets along well with other dogs, cats, and other non-canine pets it grows up with.

The boerboel can be dangerously aggressive when provoked or threatened. Its strong watch and guard dog instincts make it fearless when it comes to the safety of its family. Thus, it is important for owners to make sure that any person invited is properly introduced so the boer will not perceive them as a potential threat. Boerboel is not the best choice for first-time dog owners because of its massive size and also due to the amount of training required. Since this dog breed is intelligent and active, it needs plenty of mental and physical stimulation to be happy.

A typical serving for an adult boerboel dog is 3 1/8–4 1/8 cups of premium-quality dry dog food per day, divided into two meals. Feeding amount varies on the dog's size, activity level, and age.

Typical calorie needs of an adult boerboel per day:

The boerboel is a massive dog and consumes a lot of food. Make sure it is fed with dry food to prevent dental problems. The nutritional requirement of a large dog like the boerboel consists of high protein. Protein is important to develop a boer’s muscle and brain, and to replenish its energy. Good protein sources include chicken, fish, beef, and lamb. When feeding your boerboel, as with all dogs, keep a reliable feeding schedule. It's a bad idea to ‘free-feed’ or leave food out all day since this will encourage obesity, even for active breeds like the boerboel.

The boerboel is generally healthy amongst dog breeds with a lifespan of ten to twelve years. As with most large breeds, the boerboel can develop few health disorders. Some of the diseases common to this breed are hip and elbow dysplasia, entropion, ectropion, and gastric dilatation-volvulus (referred to as bloat).

The boerboel requires plenty of exercises to keep it healthy and happy. Brisk walks are good, but it also needs to run long distances. This dog breed is very active and will enjoy playing ball or fetch, but make sure that the activity is done within a completely fenced area or else the dog will likely escape. Obedience and agility activities are its favourite to let off steam. As a puppy, the boerboel must not be over-exercised since it is undergoing bone growth. Over-exercising its joints and bones may well result in health problems as mentioned above.

A Boerboel puppy will cost you anywhere from £800 to £1200. Since Boerboels are rare, expect to be on the waiting list if you are keen to get a well-bred pedigree puppy from a KC-registered breeder. On top of the purchase price, you will have to spend £150 to £200 for basic dog supplies and equipment. You must also set aside around £50-£60 a month for a high-quality dog food that provides the daily nutritional requirements to keep your Boerboel healthy.

Veterinary consultations, health checks, vaccinations, and boosters will cost you well over £1,600 a year. This does not include treatments for health disorders or emergencies. The cost to insure a Boer is around £60 a month for a basic cover and over £100 for a lifetime policy. 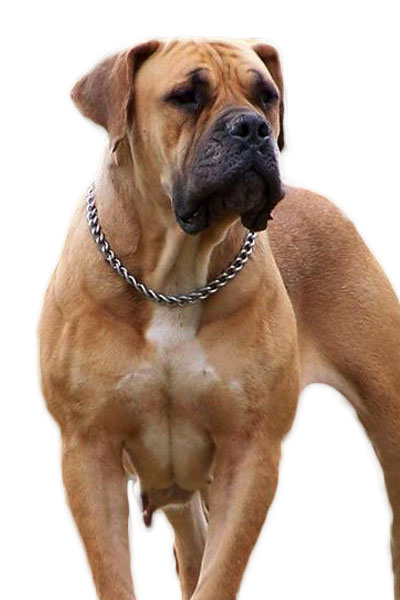 Are you sure the Boerboel is the best breed for you? Take the Pet Breed Selector Quiz to find your perfect breed match.

Can you handle a boerboel as a pet dog? If you're not sure, then feel free to take our Pet Finder to find other suitable breed suggestions.

Disclaimer:
The information, including measurements, prices and other estimates, on this page is provided for general reference purposes only.
Bloodhound
Bolognese
Contents
Not the breed you're looking for? Click Here
Latest Stories

Are slugs poisonous to dogs? The answer to this question is not cut-and-dried. Many types of slugs do not create dangerous toxins in their body, but … END_OF_DOCUMENT_TOKEN_TO_BE_REPLACED 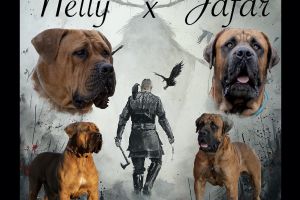 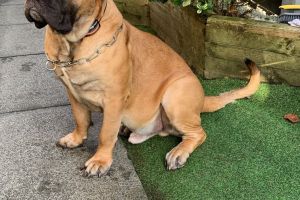 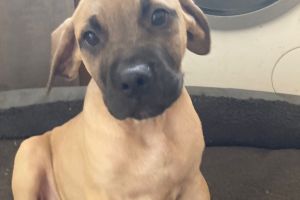 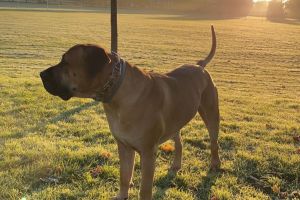