Thinking of buying or adopting a Bolognese?

The charming looks of the Bolognese, also known as the Bichon Bolognese, earned its place as a favourite companion dog. The Bolognese is a toy dog that stands at 25 to–30 centimetres at the withers and weighs 6–9 pounds. This dog breed only comes in white colour. It has a compact body and sports a single coat that does not shed. The head is ovoid and medium in length. It is loyal, intelligent, and extremely adaptable to all types of homes. It loves being with the family. The Bolognese has a life expectancy of twelve to fifteen years.

Are you interested in getting a Bolognese? Here is a brief background of this small, charming, white dog.

The Bolognese is believed to have descended from the bichon breed (includes bichon frise, Maltese, Havanese, löwchen, and Coton de Tulear), which its genetics is believed to be traced back to ancient ancestors of the poodle and barbet. Although there are apparent similarities, the exact ancestry of the Bolognese is unknown.

The name Bolognese came from a city in northern Italy called Bologna. It is thought to be where the breed was established. The breed has been recorded since the early 1200s. One of the oldest companion dogs in Europe, the Bolognese dog can be seen in artworks such as tapestries and paintings in the seventeenth century.

It was not until Liz Stannard brought the breed in England in the 1990s that it was officially shown in a class for breeds that were not yet recognised by the Kennel Club. In January 1995, the Bolognese was accepted by the United Kennel Club.

The Bolognese is a small dog under the toy dog breed. It weighs 6–9 pounds and stands 25–30 centimetres at the withers. Bolognese dog boasts of a square muscular build. Its head is of medium length and it sports strong jaws, a large black nose, and big round eyes. The ears are set high, long, and hanging at the base in pendulum shape. Its tail is also curved and rests on its back.

The Bolognese dog is a happy and playful dog. This dog enjoys the company of its owners. It enjoys walks but is not overly energetic, so short walks are fine. The Bolognese dog is a great family companion especially for households with an elderly family member. This dog breed also loves children. However, playtime must be supervised, so the Bolognese doesn't get injured during rough play with the kids.

Unlike other small dogs, the Bolognese does not have a ‘yapping’ nature. The breed has deeper vocals, but is not a big barker. It adapts to any household and type of homes, whether it's a big house or a small city apartment. The Bolognese is highly trainable, so obedience training will be a breeze.

A typical serving for an adult Bolognese dog is one cup daily of high-quality kibble or any grain-free food. Since it's a small dog, calorie need is lower, but again, the amount and frequency will depend on the dog's age, size, and activity level.

Typical calorie needs of an adult Bolognese dog per day:

An ideal diet for a Bolognese dog is raw meat or fish with green tripe, cartilage, heart, and liver. Add some vegetable corn oil or salmon oil, which is well-known to have high levels of omega-3. Other than that, it is also important that you stick to a feeding schedule. Feed the Bolognese dog twice a day, in the morning and in the evening.

A well-bred pedigree Bolognese puppy from a KC-registered breeder costs anywhere from £600 to £800. On top of this, you’ll have to pay about £200 for essential dog supplies and equipment including leashes, collars, dog bowls, and toys.

Food will cost around £30-£40 a month, which is cheaper than most breeds since this dog breed is small. Regular health checks, vaccinations, and boosters cost £800 per year.

To ensure that you are prepared for unforeseen expenses from health emergencies, it is advisable to get pet insurance. The monthly insurance premium is £20 for basic coverage and £40 for a lifetime policy.

Are you sure the Bolognese is the best breed for you? Take the Pet Breed Selector Quiz to find your perfect breed match.

It looks like a Bolognese dog is an excellent dog, but does it fit your lifestyle? If you're not too sure, feel free to check our Pet Finder for other suggested dog breeds.

Disclaimer:
The information, including measurements, prices and other estimates, on this page is provided for general reference purposes only.
Boerboel
Border Collie
Contents
Not the breed you're looking for? Click Here
Latest Stories

There is a dispute about the puppy training pads’ effectiveness in potty training. Some attest that they helped pups move forward in training, whilst … END_OF_DOCUMENT_TOKEN_TO_BE_REPLACED 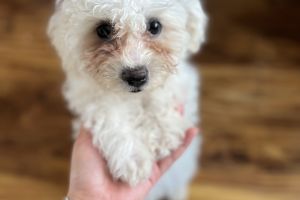