Searching for a Bracco Italiano?

As the name suggests, the Bracco Italiano originated in Italy. It has a short coat that is very easy to maintain. This large dog, weighing 55–88 pounds, loves people, including kids of all ages. It can also get along with any types of animals especially when socialised young. As a hunting dog, it has very high exercise needs.

Are you thinking of getting a Bracco Italiano? Here is a brief background of this large dog with a gentle heart from Italy.

The Bracco Italiano is an ancient breed from Italy. It is believed to have been around since the fourth century as seen in photos in literature and paintings. There are claims that it is a Segugio Italiano and Asiatic mastiff cross. Others say that it is a descendant of the St. Hubert hound. The two initial variations of the breed were the Piedmontese pointer that originated in Piedmont and the Lombard pointer from Lombardy.

As records show, the Bracco was utilised by Italian aristocrats and hunters during the seventeenth century to hunt feathered game. It almost became extinct between the nineteenth and twentieth century, but allegedly saved by an Italian breeder, Ferdinando Delor de Ferrabouc. Breed standards have been set in 1949 in Lombardy. It first came to England in 1989 and it remains a rare breed in the UK.

A large, powerful hunting dog with a noble appearance, the Bracco Italiano stands 55–67 centimetres at the withers and weighs 55–88 pounds. This muscular and strong-looking dog has a distinctive head, which is long, angular, and narrow at the zygomatic arches. Giving this breed a somewhat ‘Roman nose’ is its straight, deep, slightly arched muzzle. It has a strong jaw with a perfect scissor bite. Its fairly large dark ochre or brown and oval eyes have a soft expression. Its floppy ears are set level to the corner of its eyes. It has a nice symmetrical facial mask that matches its coat colour.

The Bracco’s coat is short, dense, and glossy. According to the Kennel Club, the standard colours are white, white with orange, white with amber or chestnut markings, white with speckles, roan with solid markings, and chestnut that has a warm and metallic sheen. It has low grooming needs as it only requires regular brushing and occasional bathing. Frequent brushing means a shinier coat.

Aside from the dog’s coat, owners should also make sure that other aspects of grooming are taken care of. The Bracco is prone to ear infections, so make sure to keep them clean and dry. Teeth must be brushed twice a week, nails regularly trimmed, and skin inspected for red spots and parasites.

The Bracco Italiano may have been raised as a hunting dog, but it is actually a gentle giant. It is friendly, loyal, and affectionate. It is often described as a people-loving dog as it blossoms in a home environment where it can bond with its owners. Children have a special place in its heart, and it is extremely patient toward them regardless of what age they are. However, interactions should always be supervised to avoid untoward incidents related to its large size. It can also get along with other pets, even cats especially when exposed to them early. This breed will bark at strangers, but its gentle nature makes it an ineffective guard dog.

The Bracco is an intelligent breed that is also a people pleaser. This combination may sound perfect when it comes to dog training, but for this breed, think again. It has a tendency to test you and decides whether your command is worth following. Obedience training should start early to avoid developing a dominant nature, which can be risky in large dogs. Whilst it is important to be firm, it is worth noting that it is a sensitive dog, so harsh methods don’t typically work. When you establish your alpha role and treat it with kindness, the Bracco would become obedient.

Dog breeds have general characteristics, but this does not mean that your Bracco will develop them all. Heredity, environment, socialisation, and training contribute to its overall character. Diet is also believed to influence a dog’s level of intelligence.

A typical serving for an adult Bracco Italiano is two to four cups of excellent-quality dry dog food per day. However, like in every breed, the frequency of feeding and the amount of food depend on its age, size, build, and activity level.

Considering the size of this breed, it should be given a high-quality dog food formulated for large dogs. If it leads an active lifestyle, select one specifically made for active dogs to support its high energy requirements. Animal protein (lamb, beef, and chicken) should be the main ingredient for a healthy weight, strong muscles, and enhanced mobility. Omega-3 and omega-6 fatty acids are also recommended to maintain a healthy coat.

The Bracco Italiano, with a lifespan of twelve to fourteen years, is generally a healthy dog but may suffer from some hereditary health problems. These include bloat, eye problems, bendy legs, and hip and elbow dysplasia.

Bred as a gun dog, the Bracco is an energetic dog with extremely high exercise needs. At least two hours’ worth of physical activities is needed to keep it healthy and happy. Walking may be boring for this breed, so better incorporate hunting games to physically and mentally exhaust it and avoid destructive behaviour. Also, a great bonding activity is playing hide and seek.

The cost of a well-bred Bracco Italiano puppy from a KC-registered breeder is at least £600. Because there are only a few puppies being sold every year, expect to be on the waiting list for months. On top of the purchase cost, you will need to spend around £200 for essential dog supplies like leashes, collars, crates, beds, toys, and grooming products.

Premium-quality dog food and treats will cost you £60 a month. You also have to factor in regular vet visits check-ups, vaccination, boosters, and flea/worming treatments, which cost £1,200 a year. As a safety net for unexpected vet expenses, get pet insurance which will cost you £50 a month for basic cover and £100 for lifetime cover. 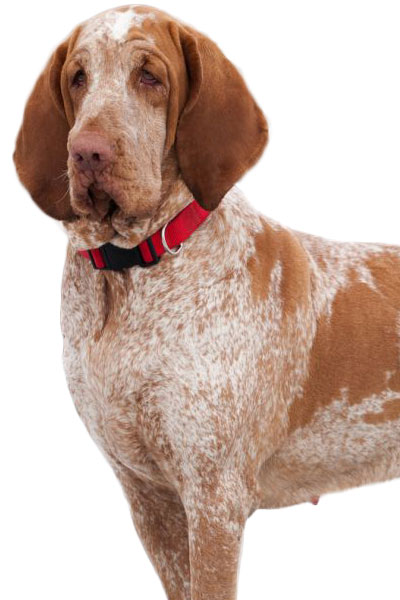 Are you sure the Bracco Italiano is the best breed for you? Take the Pet Breed Selector Quiz to find your perfect breed match.

Do you feel like a Bracco Italiano is too big for you? Take our Pet Finder to narrow down your dog breed choices.

Disclaimer:
The information, including measurements, prices and other estimates, on this page is provided for general reference purposes only.
Boykin Spaniel
Braque D Auvergne
Contents
Not the breed you're looking for? Click Here
Latest Stories

Socialising adult dogs may seem like a daunting task as some full-grown pooches are set in their ways. However, all hope is not lost. There are many … END_OF_DOCUMENT_TOKEN_TO_BE_REPLACED 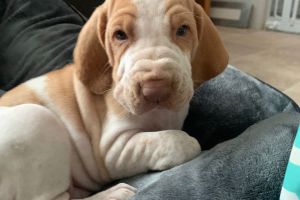