Thinking of buying or adopting a Chinese Crested?

The Chinese crested dog is believed to have come from Africa and not China, despite its name. Standing 23–33 centimetres and weighing 10–13 pounds, it comes in two varieties that can be found in one litter, the hairless and the powderpuff. This dog may be small in size, but it boasts of a unique appearance and a big personality. It develops a strong bond with its owners, so it tends to have separation anxiety when left alone.

Are you thinking of getting a Chinese crested dog? Here is a brief background of this unique, elegant-looking toy dog.

Albeit its name, the Chinese crested dog is believed to have originated in Africa in the nineteenth century and was known as the African hairless terrier as evidenced by written texts. However, some argue that dogs of the same appearance, indeed, have been around in China since the thirteenth century. Other breed experts argue that there is also evidence of a genetic connection to the Mexican hairless dog referred as the xoloitzcuintli. It is believed that Chinese traders brought these hairless dogs back with them and used them as vermin hunters in ships. The breed was renamed by its Chinese owners to its current name.

The Chinese crested dog has a unique, graceful, and elegant appearance. There are actually two varieties of this breed, which can be found in a single litter: (1) the hairless, with a silky hair on the head, tail, and feet; and (2) the powderpuff, a genetically recessive kind with a full coat. Belonging to the Toy Group, the crested stands 23–33 centimetres and weighs 10–13 pounds. Both varieties have a slightly elongated and rounded head, cleanly chiselled cheeks, strong jaws with a perfect scissor bite, dark, almond-shaped eyes, large and erect ears that are set low, and a slender, medium to long body.

The hairless crested has a soft, flowing hair on its head, feet, and tail and is bald on the rest of its body. The powderpuff crested has a silky double coat with a thick, flowing undercoat. According to KC standards, all colours and colour combinations are acceptable. This breed usually comes in black, white, blue, brown, cream, sable, fawn, gold, liver, mahogany, and tricolour. The skin tone of the hairless can pale cream, pink, and black.

The two varieties have different grooming needs. The hairless needs to be bathed frequently as its hairless body tends to develop skin problems like acne and blackheads. Applying sunblock or moisturisers is a big no-no. The powderpuff requires a lot of work to groom. Its undercoat tends to mat easily, so daily brushing is a must. As it gets older, it can be done weekly. Because the powderpuff has long, flowing hair, it needs to be taken to a professional groomer several times a year, so that grooming at home becomes more manageable. Bathing can be done as needed, not as frequent like the hairless.

Chinese crested dog breed is prone to dental problems, especially the hairless variety. Make sure to brush its teeth at least three times a week and give it dental chews to remove tartar build-up. You also have to clean and keep its ears dry to avoid infections. Its nails should also be trimmed as overgrown nails can be uncomfortable and may cause scratch wounds to people and other pets. Lastly, always inspect your dog’s skin for bumps and ticks/fleas.

The Chinese crested dog is a happy, friendly, and sweet breed. This lapdog has a big personality that is as interesting as its unique coat. It loves human companionship and forms a strong bond with its family. That being said, it tends to develop separation anxiety and becomes destructive when bored or anxious. It thrives in a household where one person always stays home. It is a good choice for first-time dog owners as long as they are willing to provide for its unique needs, especially when it comes to its sensitivity to sudden weather changes.

Unlike other toy dogs, the crested is playful and good with children and is not snappy toward them at all. However, interactions should always be supervised to avoid mishandling. This breed is suited for older kids who know how to handle small dogs. When it comes to animals, this breed tolerates other pets, even cats especially when raised together. However, other small pets that it is not familiar with are a different story as the breed might consider them fair game. Whilst it is tempting to coddle and spoil this breed, this can actually cause unwanted behavioural problems like nipping and barking. Spoiled dogs have a tendency to be timid and anxious around new people, places, and scenarios.

The Chinese crested is an intelligent dog, but it can be challenging to train because of its sensitive nature. Once you know how to approach it, gentle yet firm with the right amount of positive reinforcements, it is highly trainable. Be patient and consistent when it comes to house-training as some owners tend to let go of accidents because they are easy to clean up.

A typical serving for an adult Chinese crested dog is 1/4–1 cup of excellent-quality dry dog food per day. However, make sure that you measure its food and avoid free-feeding, so it wouldn’t pack extra pounds. As a tiny dog, a slight change in the amount of food that looks harmless already has a big impact. As tempting as it is, also go easy with the treats.

The Chinese crested dog should be given high-quality food formulated for toy dogs. First off, kibble size matters. Small dogs will have trouble chewing large pieces, which can be a choking hazard or cause indigestion. Whilst you may feed your Chinese crested with home-prepared meals, you may be denying it some important nutrients found in good commercial food. Reliable brands hire vets and nutritionists to formulate a complete and balanced food for dogs. If you are having doubts, ask a trusted veterinarian.

The Chinese crested dog that is properly cared for can live up to fourteen years. It is generally a resilient dog, but like other breeds, it is predisposed to certain health issues like autoimmune diseases, closed ear canal, heart problems, and eye problems including dry eye, primary lens luxation, and progressive retinal atrophy. It can also develop patellar luxation, Legge-Calves-Perthes, epilepsy, von Willebrand disease type II, degenerative myelopathy, and canine multiple system degeneration.

The crested may be lively, but it is not hyperactive. It only needs minimal exercise, about thirty minutes’ worth of short walks daily, paired with free time at a secured garden. As a breed that loves digging and escaping, keep an eye on it during exercise time and ensure that the fence is sturdy and high. During cold months, it should wear a coat and protective footwear when outside. On the other hand, it should only be taken out early in the morning or at night-time during summer.

Getting a Chinese Crested pedigree puppy will cost from £350–£600 perhaps a bit more if it is from a reputable breeder. Insuring your dog will be another expense that can range from £20 for a basic insurance coverage up to £40 for lifetime coverage, which can be higher depending on premium. The price for insurance policies may differ based on certain conditions such as where you live and your dog’s health and age.

Feeding your Chinese Crested dog with high quality food and treats will cost £30 per month. To keep it healthy you need to make sure that the food is suitable for each stage of its life. You would also need to buy dog accessories such as bowls, beds, leads and collars, which have an initial cost of £200. In addition, be ready to spend about £1,000 annually for vet bills, neutering or spaying, vaccinations, and deworming/flea treatments and £20 for professional grooming services.

As a rough estimate, it will cost you around £100 per month to care for a Chinese crested dog, depending on the type of insurance you choose. 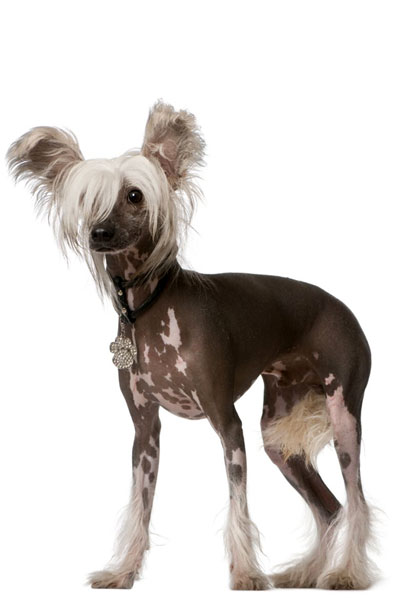 Are you sure the Chinese Crested is the best breed for you? Take the Pet Breed Selector Quiz to find your perfect breed match.

Still unconvinced that the Chinese crested dog is the right breed for you? The Pet Finder on our website will assist you in finding which breeds fit your current lifestyle.

Disclaimer:
The information, including measurements, prices and other estimates, on this page is provided for general reference purposes only.
Chihuahua
Chorkie
Contents
Not the breed you're looking for? Click Here
Latest Stories