Looking for a Curly Coated Retriever?

Developed to retrieve live games whether on land or water, the curly-coated retriever is a favourite sporting (Gundog) breed of English estate gamekeepers, hunters, and poachers. Today, the curly is used for therapy, drug detection, as well as search and rescue. The curly is an energetic and well-muscled dog that appears leggy and longer in length than it is tall. It weighs 65–100 pounds and stands 58–69 centimetres. The curly-coated retriever is stand-offish with strangers, but extremely loyal and affectionate with its family. It can live anywhere from nine to twelve years if given the proper care.

Will you open your home to a curly-coated retriever? Here is a brief background of this hero dog breed.

There is not much on record about the curly's heritage. Most reports claim that its lineage came from the now-extinct English water spaniel and poodle. Whatever its ancestry is, it is obviously bred to retrieve games and is the first known breed used for serious retrieving in England during the 1860s.

The curly-coated retriever was a popular dog for hunters, poachers, and English estate gamekeepers until the Labrador came into the picture. World War II in 1919 did not help with keeping the breed's existence. In fact, after the war, there were only five curlies registered in existence. Some curly-coated retrievers were brought into the United States in 1907, but the breed was only recognised and registered in 1924. Importing the breed helped in keeping its line alive. The breed is also recognised by the Kennel Club in the UK.

Like all retrieving breeds, the curly-coated retriever is large and sturdy with athletic build. Despite its large size weighing 65–100 pounds, this retriever dog is graceful. Characteristic appearance of a curly is its coat of tight, crisp curls, hence the name. The curled coat repels water and protects it from rough brush. It also wears smooth hairs on the face, hocks, and legs. The curly is longer than it is tall, standing at 58–69 centimetres at the withers. Its head is wedge-shaped and slightly longer. The curly has a wide muzzle that is tapered. Its coat comes in either black or liver, which is the same colour as the nose. The breed has pendant ears and is soft-mouthed.

A curly's coat sheds throughout the year, albeit minimally. However, the breed sheds more and quite heavily during spring and autumn. With this in mind, the curly needs to be brushed weekly to remove loose hairs, which may become a mess around the house. The dog should only be bathed as needed, as frequent bathing may alter its water-resistant characteristic. Don't forget to check its ears for signs of infections, which is common for pendant ears. Clean the ears by using a veterinarian-approved solution and soft cotton balls. Brush its teeth at least once per week to minimise bad breath and keep dental diseases at bay.

When it comes to temperament, the curly is an easy-going and affectionate dog that is all too eager to please its owner. Its desire to please makes training easy to do, and its intelligence helps with this as well. The curly-coated retriever operates in packs, as with all gun dogs, so it will need someone who knows how to train it and will serve as the leader of the pack. When an owner establishes his/her authority as the leader, the curly looks up to him/her for guidance and direction. Suffice to say, it is not the best dog breed of choice for first-time dog owners.

The curly is aloof around strangers, but loving and loyal to its family. Anywhere it goes, the curly exhibits alertness and self-confidence. Since it is also intelligent, it has a mind of its own. With that said, socialisation and training are crucial and must be started at a young age. It is an active breed, which means it gets bored easily if not given enough physical and mental stimulation.

With regard to its interaction with children and other pets, the curly is even-tempered and gets along fine with children of all ages. However, it will be ill-advised to leave any dog with a child unsupervised. Other pets such as other dogs and cats that were raised alongside it are fine. Exemptions are neighbours’ pets, which a curly may perceive as fair game.

A typical serving of an adult curly-coated retriever is three to four cups of the best-quality dog food per day. As a dog owner, knowing the basic nutritional needs of your curly is important. Considering each breed's characteristics (age, size, level of activity, and metabolism), its diet must be tailored to its needs. When doubtful, make sure to consult with a veterinarian.

Typical calorie needs of an adult curly-coated retriever per day:

It is important that you not only know how much to feed your curly, but also what to feed it. It does not matter what brand of dog food you buy as long as you are sure that it is high-quality and provides the dog with enough protein for muscle and bone growth. Most importantly, feeding a curly or any other dog with one large meal must be avoided. Most dog breeds will develop bloat or gastric torsion and are also prone to become overweight, which will put pressure on its joints. As much as possible, stick to a two-to-three-meals-a-day schedule and measure its food based on its calorie requirement.

With an average life expectancy of nine to twelve years, a curly-coated retriever must be generally healthy. However, this is not to say that this dog breed is not prone to health issues. Common health disorders experienced by this breed are as follows: hip dysplasia, epilepsy, bloat or gastric torsion, and some eye disorders. To make sure that your curly is not experiencing any of these health disorders, check with the veterinarian to know about signs, symptoms, and preventive measures.

The curly is ideal for people who live an active lifestyle doing outdoor activities. This dog breed will need at least two hours of daily exercise that must include mentally stimulating activities. A curly-coated retriever excels in many canine sports, including obedience and agility. When taking your curly outside, make sure it's on a lead, or if playtime is done in the backyard and off-lead, the fence must be secured to prevent it from escaping.

Just like other rare dog breeds in the UK, you may have to go on a waiting list before you can get your hands on a Curly Coated Retriever. A well-bred Kennel Club registered pedigree puppy can set you back £600- £800 or more if it is from a reputable breeder. When it comes to feeding your dog, you may only have to spend about £15- £20 a month as it is not a fussy eater. If you want high-quality food and treats for your dog, prepare a monthly expenditure of £50- £60.

To offset some bills when your dog suddenly falls ill or gets into an accident, you may want to purchase pet insurance. It costs about £22 for a time-limited cover and £48 for a lifetime one. These prices vary depending on your dog’s health and age, the type of cover you choose, and whether it has pre-existing conditions.

Other outgoings to consider are dog accessories and equipment such as leads, collars, bowls, bed, and toys. The initial cost for these things is £200. There are also veterinary expenses that may not be covered in a pet insurance such as vaccinations, routine checks, neutering or spaying, and annual boosters, which can have a combined cost of £800-£1000 annually. In a rough estimation, you will be budgeting around £80–£100 a month for recurring expenses, depending on the level of insurance cover you choose for your dog. 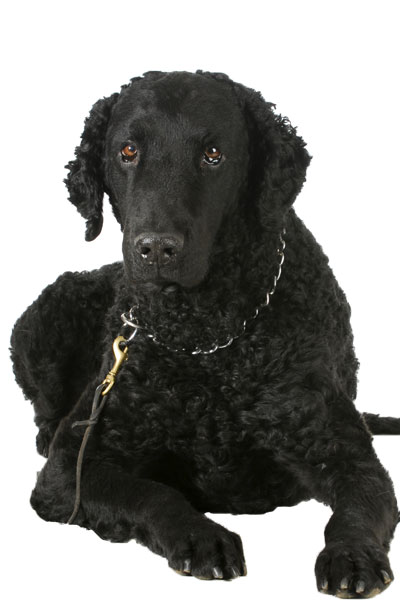 Are you sure the Curly Coated Retriever is the best breed for you? Take the Pet Breed Selector Quiz to find your perfect breed match.

It's awesome to get a unique dog like a curly-coated retriever for a pet. If you are not 100 per cent sure that it fits your lifestyle, use our Pet Finder to find a dog breed that is more you.

Disclaimer:
The information, including measurements, prices and other estimates, on this page is provided for general reference purposes only.
Coton De Tulear
Dachshund
Contents
Not the breed you're looking for? Click Here
Latest Stories 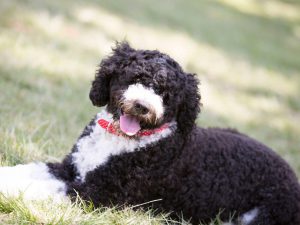