Searching for a Deerhound?

The deerhound is a large hound dog that has origins in Scotland. It weighs 75–110 pounds and stands 71–76 centimetres at the withers. It is well-muscled and athletic-looking, but also graceful-looking. Its coat is thick, harsh, and wiry that is at least three inches long. The deerhound's harsh coat is meant to protect it from the unfriendly elements through the rough terrain. The deerhound was known as the Royal Dog of Scotland because of its chivalrous, strong, and dignified personality. As a family pet, it is very protective but also gentle, friendly, and laid-back.

The actual origins of the deerhound are unclear, although records suggest that the breed existed around 1st century AD as it was depicted in a Roman pottery found in Argyll, Scotland. The pottery showcases a deer hunt using large rough hounds. It is obvious how the name deerhound came to be as this dog breed was utilised to hunt red deer until the end of the nineteenth century.

The deerhound was highly valued for its courage and dignity. It became known to be the Royal Dog of Scotland, not only for its qualities, but also because only a nobleman can own and claim a deerhound. The restrictions on ownership meant only a few deerhounds were bred, which did not bode well for its survival.

It was in the late 1700s that the deerhound breed was nearly brought to extinction when the clan system of the nobility collapsed after the battle of Culloden in 1745. This was also the period when the deerhound was stripped off its status as a dog for nobility. There were attempts to revive the breed in the 1820s by Archibald and Duncan McNeil. The breed was brought to America and was first registered by the American Kennel Club in 1886.

The deerhound is a large, elegant-looking hound dog that weighs 75–110 pounds. It is known to be amongst the tallest sighthounds standing 71–76 centimetres at the withers. It has a large, long head that is broad, especially at the ears. It has small ears that are dark, soft to touch, and are folded back against the head. It has a muzzle that tapers toward the nose, nice, level lips, and strong jaws with perfect scissor bite. The deerhound's eyes are dark, which can be hazel or dark brown in colour.

When it comes to the coat, the deerhound sports a thick and long wiry coat that is harsh to the touch. Its coat is meant to protect it from the rough terrain in the Scotland Highlands. However, the texture and quality of its coat change depending on the climate of where it is raised. For instance, deerhound breed in America usually has a mix of silky and wiry coat. Coat colours range from dark blue grey, dark grey, brindle, light grey, red, fawn, yellow, and sandy red.

The deerhound sheds throughout the year. Brushing with a wire slicker brush at least twice a week will suffice to remove dead hairs and maintain the skin’s natural oils. Baths are as needed to remove dust and the doggy odour. Other grooming requirements include dental and nail care. Brush the deerhound's teeth at least twice a week to prevent decay and gum disease. Nails must be trimmed to keep it in good condition. The deerhound has floppy ears that are prone to infection, so make sure they are cleaned regularly.

A typical deerhound is quiet and dignified, but boasts of a laid-back approach in life. In contrast to its large size, this dog breed is a gentle giant at heart. The deerhound likes nothing more than to be surrounded by its family and being loved. Its large size makes it a little clumsy around the house, especially around small children. It is not the best choice for families with no background in handling a large dog and that have small children at home.

The deerhound requires adequate space for its large size, long strides, and powerful gallops. It is ideal for people who live in the countryside and are able to dedicate time to its training and exercises. This dog breed is smart and is a people-pleaser, which means training will be easy. However, it is best to start its training and socialisation when it's young.

The deerhound is aloof and polite to strangers. When it comes to other household pets, the deerhound gets along well with cats and other dogs, but it will not hesitate to chase any small furry creature that runs.

A typical serving for an adult deerhound is 3–4 cups of high-quality dry dog food per day. The amount of food to serve your dog will largely depend on its size, age, build, metabolism, and activity level. Like humans, each dog has different nutritional requirements. When in doubt about what to feed and how much to feed a deerhound, consult with a veterinarian.

The deerhound should be given high-quality food formulated for large and active dogs. This dog breed will need food that is high in protein, but low in carbs. Feed your deerhound a raw, meaty, bone diet and/or whole carcasses, minced chicken with bone, turkey necks and wings, lamb ribs, beef, and bison tripe.

The average lifespan of a deerhound is eight to nine years. It is generally healthy when properly cared for, but predisposed to health problems. This includes liver shunt, dilated cardiomyopathy, cystinuria, osteosarcoma, gastric torsion or bloat, hypothyroidism, and some allergies. Consult a veterinarian if you find any abnormalities in your deerhound.

The deerhound needs to have an adequate space to run and gallop, so a safe and enclosed area at home is ideal. It needs at least two hours of exercise daily to keep it happy and healthy. The deerhound is not the type of dog that will adapt easily to a life in a city and it is definitely not ideal for city apartments.

The Deerhound is a rare breed in the UK and if you are set on getting one, you may have to go on a waiting list. The minimum price for well-bred Kennel Club registered pedigree puppy is £1,000. The price is on the high side as very few puppies are registered each year.
Part of caring is feeding and making sure your dog stays in top shape. High quality dog food can set you back £60-£70 a month. You would also need to spend on dog accessories such as leads, collars, bowls, crates, beds, and toys. The combined initial cost for these things is estimated at £200.

Moreover, you may have to consider paying for pet insurance to offset veterinary bills in case your dog suddenly falls ill or gets into an accident. Depending on where you live and your dog’s health and age, a time-limited cover can cost £70 a month while a lifetime one can cost up to £130 a month. Generally, insurance companies do not cover routine veterinary consultations, initial vaccinations, boosters, and neutering or spaying, so you may also have to spend an additional £2000 annually for these services.

On average, the minimum cost to care for a Deerhound is £200 per month depending on your pet insurance premium. Lastly, this estimate does not include the rates for other services such as walking and grooming.

Are you sure the Deerhound is the best breed for you? Take the Pet Breed Selector Quiz to find your perfect breed match.

Do you feel like the deerhound is a challenging breed? Find other dog breeds that match your lifestyle through our Pet Finder.

Disclaimer:
The information, including measurements, prices and other estimates, on this page is provided for general reference purposes only.
Dandie Dinmont Terrier
Doberman
Contents
Not the breed you're looking for? Click Here
Latest Stories

Socialising adult dogs may seem like a daunting task as some full-grown pooches are set in their ways. However, all hope is not lost. There are many … END_OF_DOCUMENT_TOKEN_TO_BE_REPLACED 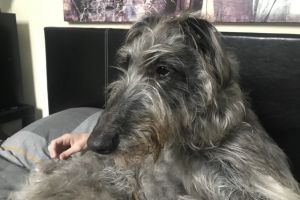