Looking for a Doberman Pinscher?

The Dobermann originated in Germany in the nineteenth century, developed by a tax collector and dogcatcher named Herr Karl Friedrich Louis Dobermann. Sporting a muscular body and an elegant appearance, it is one of the most recognised breeds in the world. The Dobie is loyal, sweet, and affectionate to its owners, but this breed is not for everyone. It has a strong guarding instinct and tends to be wilful, making it difficult for first-time owners and families with very young kids.

Is a Dobermann pinscher the dog of your dreams? Learn about this elegant dog with above-average guarding skills.

The Dobermann pinscher, known as the Doberman in other countries, owes its existence to Herr Karl Friedrich Louis Dobermann, a tax collector and dogcatcher from Germany. In the 1800s, Herr Dobermann needed a guard dog that would protect him against robbers whilst he did his rounds. With his experience in dogcatching, he decided to breed dogs in the hopes of developing the perfect companion and protector. He wanted a courageous and intelligent dog with a good nose and strong jaws.

Through selective breeding, he was able to produce a dog with these qualities and named it Schnupp, which became his foundation stock. His experimentations led to black puppies with rust markings and a naturally bobbed tail, as well as blue-coated ones. A breeder close to Herr Dobermann named Otto Goeller confirmed that the other breeds used to develop the Dobermann breed were the German pinscher, the German shepherd, and the Great Dane.

Since Herr Dobermann did not keep any records of his breeding activities, there had been a lot of debate as to the real ancestry of the Dobermann breed. It was only in 1890 that a breed standard was established and the National Dobermann Pinscher Club in Germany was formed in 1899. Today, the Dobermann breed continues to be one of the most recognised dogs in the world, not just as a home protector and police/military K9, but as a family dog as well. It is registered with the Kennel Club under the Working Group.

The Dobermann is a distinguishable, muscular, elegant, medium-to-large dog with a sleek and smooth coat. Weighing 32–45 kg and standing 61–72 centimetres, it is a proud-looking dog that has an athletic appearance that exudes power and strength. It has a long, well-proportioned head in relation to its body. It has a pair of almond-shaped eyes, which are set moderately deep, giving it an alert and lively expression. It has neat and small ears that are set high on its head. It has flat cheeks, tight lips, and solid and well-developed mouth with a perfect scissor bite. The colour of its nose depends on the colour of its coat.

The Dobie’s coat is short and close-lying to its skin. According to KC standards, the accepted colours are definite black, brown, blue, or fawn with rusted red markings. Maintaining this sleek coat is a breeze since it only needs weekly brushing using a grooming mitt. It is a very clean dog with a minimal doggy smell. Bathing can be as needed, as doing it frequently will strip off its natural oils.

Other grooming essentials include dental hygiene (regular brushing and playing with dental chew), nail trimming, and ear cleaning. Owners should also take time to inspect its skin, which should be done meticulously because of the Dobie’s dark-coloured coat to make sure there are no abnormal bumps or ticks/fleas.

The Dobermann is an intelligent, affectionate, and loyal pet. That being said, it needs an experienced owner that knows how to handle dogs with strong guarding instincts. Whilst the breed is calm and friendly to its owners, it has to be treated with respect but made to understand its place in the pack. Early socialisation and training are important to be able to set ground rules and boundaries for the puppy. When it is treated with kindness and love, it grows up to be a trustworthy companion. However, it is not the best choice for families with very young children because of its size and overprotectiveness toward them. It is also not suitable for people with hectic schedules since it has high exercise needs. Whilst the Dobermann can do well with other pets they grew up with, extra caution is needed as its strong prey drive might get the best of it.

The Dobermann is sometimes misjudged as a vicious dog because of some irresponsible dog owners and partly due to its intimidating appearance. Naturally, this dog breed is protective of its family and is wary of strangers. However, it is usually warm to guests, especially when introduced by the owner and treated with kindness. It should never be aggressive for no reason. It doesn’t usually look for trouble, but it definitely won’t back down in times of danger.

Many people do not know that the Dobie is not an outdoor pet even though it was originally developed to protect people and their property. It needs to stay inside the home as it longs for human companionship. It develops a strong bond with its family, thus, making it clingy. Being left for long periods will make it noisy and destructive.

The Dobermann is a smart dog with a strong desire to please its owners, making it highly trainable. It usually excels in various canine activities, which is why it is often used by the military and police. It needs guidance from a firm and consistent owner to become a well-rounded dog. First-time dog owners will have a hard time handling a wilful dog like the Dobie.

A typical serving for an adult Dobermann is 3.5–4.5 cups of excellent-quality dry dog food per day. The amount of food and the frequency of feeding would depend on your dog’s weight, metabolism, exercise routine, and other factors.

As a rough guide, below are the typical calorie needs of an adult Dobermann per day:

Large, active dogs do require more protein in their diet and the Dobie falls under this category. However, this breed is prone to kidney disease, so it isn’t as easy as it seems. The best way to approach this is talking to a trusted veterinarian for advice on how much protein you should serve per meal. Since this breed is prone to hypoglycaemia, it needs good complex carbs like sweet potatoes, oats, and barley to avoid blood sugar spikes and crashes. Whilst it is true that its coat is not long and fluffy, it still needs good sources of fat as its coat tends to dry out.

The life expectancy of a well-loved and well-cared-for Dobermann is nine to thirteen years. Like most breeds, it is predisposed to some health conditions, but it does not mean it will get any or all of these illnesses. These include bloat, eye problems, kidney issues, blood clots, hypothyroidism, hypoglycaemia, hip dysplasia, Dobermann cardiac troponin I, and Von Willebrand disease.

The Dobermann is an active dog that needs plenty of physical and mental stimulation for at least two hours a day. Aside from daily walks, it needs more challenging activities like canine sports, including fly ball and agility. If its exercise needs are not met, it will find ways to amuse itself in destructive ways.

If you are considering buying a well-bred pedigree Doberman puppy, you may need to spend between £600 and £1,000. Getting a pet insurance is normally recommended as it can help offset veterinary bills in case your dog suffers sudden illness or gets into an accident. Basic pet insurance coverage starts at £30 per month and can go up to £160 for a lifetime cover.

Caring for your Dobie includes feeding it high quality food and if you include treats, it will set you back £40–£60 per month. Initial equipment and supplies such as leads, collars, bowls, crates, beds, and toys. The combined initial cost for these things is estimated at £200.

Other outgoings go to routine veterinary trips, which will include consultations, vaccination, deworming, and tick or flea treatments. You must also allocate at least £1,000 annually, which does not cover major surgeries or long-term treatments if need be. Obedience school is another cost you need to consider for this challenging dog. On average, the monthly spending in raising a Doberman will be from £100 to £150.

Are you sure the Doberman Pinscher is the best breed for you? Take the Pet Breed Selector Quiz to find your perfect breed match.

Did you realise that a Dobermann is too much for you to handle? Allow us to help you choose the best breed by using our Pet Finder.

Just the thought of having our dogs muzzled can be really disturbing. This is a matter that needs to be openly discussed for the safety of the dog, an … END_OF_DOCUMENT_TOKEN_TO_BE_REPLACED 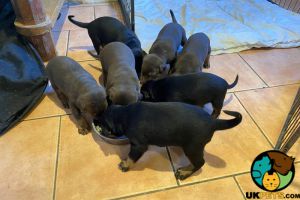 Just the thought of having our dogs muzzled can be really disturbing. This is a matter that needs to be openly discussed for the safety of the dog, an … END_OF_DOCUMENT_TOKEN_TO_BE_REPLACED