The Dorset Olde Tyme Bulldogge is a new breed developed by a man named Steve Barnette in the 1980s. It was created as a better version of old-type bulldogs from the Tudor Era, health- and temperament-wise. True enough, the Dorset is a calm and gentle dog that is not prone to many hereditary health issues. It has not been recognised by the Kennel Club yet.

Here is a brief background of Dorset Olde Tyme Bulldogge if you are interested to own one.

The Dorset Olde Tyme Bulldogge, like its English bulldog cousin, originated in the United Kingdom, thanks to a man named Steve Barnett. In the 1980s, he created a breeding programme dedicated to producing the ideal old-type bulldog from the Tudor Era. The objective was not to recreate the old baiting and fighting dogs, but to improve their health and temperament. He got inspired by the perfect dog he saw in paintings and drawings during the aforementioned era, and used dogs with British Kennel Club bloodlines as his breeding stock.

He was successful in creating the Dorset Olde Tyme Bulldogge, often described as a true athlete boasting of an impressive amount of stamina whilst still being a loyal companion. The modern Dorset is a great family pet that also gets along with other animals. Although it has gained popularity, it still remains unregistered with major breed registries like the Kennel Club and the American Kennel Club.

The Dorset Olde Tyme Bulldogge is a medium-size dog that embodies strength, confidence, and pride. Standing tall and proud, it weighs 59–90 pounds and stands 48–61 centimetres. Its body is compact and well-muscled, having the traditional bulldog look. It has a large head with a slightly convex top, prominent cheeks, strong muzzle, rose-shaped ears that are set high, and a broad nose with opened nostrils.

The Dorset’s coat is short and close-lying, often compared to that of a Staffordshire bull terrier’s. It comes in the following colours: white, black, brindle, slate grey/blue, or a combination of these colours. This breed has low grooming needs and would benefit from a weekly wipe and brush to keep it in top shape. Make sure that its wrinkles are cleaned regularly to avoid sores that can lead to infections.

Since its coat is easy to maintain, owners have a lot of time to care for the other parts of its body that need attention. These specifically include its teeth and gums. Brush its teeth twice a week to avoid dental problems. Also clean its ears, trim its nails, and ensure that its skin does not have any bumps. You also need to watch out for fleas and ticks, especially if your dog interacts with other pets outdoors.

The Dorset Olde Tyme Bulldogge is a confident, agile, courageous, and loyal dog. The breed is often described as an all-rounder, which is more importantly a wonderful family pet. It forms a strong bond with the family and would always want to be involved in all activities. In fact, it is good around children of all ages because it is gentle and placid. However, it may not be a good choice for families with toddlers because of its size. For older children, caution and supervision are needed as it has a strong nature to protect, although not aggressive if not provoked. It also does well with other house pets especially when raised together, but the neighbour’s cats and other pets are a different story. It may chase them as it sees them as fair game.

The Dorset is an intelligent and willing-to-please breed, making it highly trainable. This breed may be docile, but it sometimes has a stubborn streak, which is why a firm yet gentle hand is needed. It thrives in a household where the alpha role is established early on, so it knows where to turn to for direction and guidance. It cannot be left alone for long periods as it develops separation anxiety. There should always be one member that stays at home to accompany it or it will do undesirable things to amuse itself.

As with any dog, the Dorset needs to be socialised early and exposed to different environments to become a well-rounded dog.

A typical serving for an adult Dorset Olde Tyme Bulldogge is 2.5–4 cups of excellent-quality dry dog food per day. To ensure that it maintains a trim body size, measure its food and avoid free-feeding.

Unlike other bulldog breeds, the Dorset doesn’t have any sensitivity or any special food requirements as it is a generally healthy breed. That being said, it still needs to be fed high-quality food with animal meat as the number one ingredient. Protein is an important nutrient for most dogs as they are carnivores. If possible, choose grain-free varieties for medium-size dogs. Always read the labels and avoid those sold in supermarkets because they tend to contain plenty of unhealthy fillers as well as artificial colourings and flavourings.

The Dorset Olde Tyme Bulldogge is known as a healthy and vigorous breed that is usually unaffected by many hereditary diseases. Nonetheless, there aren’t enough studies about its health because it is a relatively young breed. But this doesn’t mean that you have to neglect veterinary consultations. The average lifespan of a Dorset is ten to fourteen years.

The Dorset is not a high-energy dog, but would require at least forty minutes of exercise every day. A short walk in the morning paired with a more interesting activity like games of fetch in the afternoon will be enough. Lack of physical activities and mental stimulation would lead to destructive behavior.

If you are set on getting a Dorset, you may have to go on a waiting list as this breed is rare in the UK. The minimum price for well-bred Kennel Club registered pedigree puppy is £500 and can go higher if it is from a reputable breeder.
Part of caring is feeding and making sure your dog stays in top shape. High quality dog food and treats can set you back £40-£50 a month. You would also need to spend on dog accessories such as leads, collars, bowls, crates, beds, and toys. The combined initial cost for these things is estimated at £200.

Moreover, you may have to consider paying for pet insurance to offset veterinary bills in case your dog suddenly falls ill or gets into an accident. Depending on where you live and your dog’s health and age, a time-limited cover can cost £50 a month while a lifetime one can cost up to £120 a month. Generally, insurance companies do not cover routine veterinary consultations, initial vaccinations, boosters, and neutering or spaying, so you may also have to spend an additional £1000 annually for these services.

On average, the minimum cost to care for a Dorset is £130 per month depending on your pet insurance premium. Lastly, this estimate does not include the rates for other services such as walking and grooming. 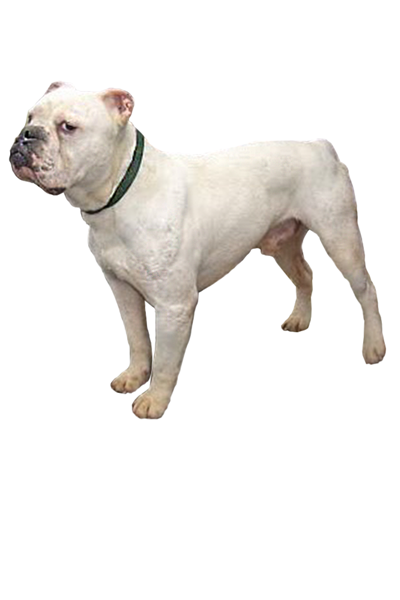 Are you sure the Dorset Olde Tyme Bulldogge is the best breed for you? Take the Pet Breed Selector Quiz to find your perfect breed match.

Changed your mind about owning an Olde Tyme Bulldogge? Allow us to help you find other suitable breeds through the Pet Finder.

Disclaimer:
The information, including measurements, prices and other estimates, on this page is provided for general reference purposes only.
Dogue De Bordeaux
Double Doodle
Contents
Not the breed you're looking for? Click Here
Latest Stories