Thinking of buying or adopting a Dutch Shepherd?

The Dutch Shepherd Dog is a versatile herding breed that was developed in the Netherlands. He is nicknamed Dutch Herder, Dutchie, and Hollandse Herdershond. This rare breed is related to 2 prominent Shepherd Dogs: German Shepherds and Belgian Shepherds.

Dutch Shepherds are multifaceted and can work in various fields. They are capable guide dogs, police dogs, and search and rescue dogs. They are also wonderful family pets since they deeply value their loved ones and are protective of them.

The complexity of the Dutch Shepherd Dog breed's grooming routine depends on his coat type. As a herding dog, daily exercise and mental stimulation are required. He is a strong and healthy breed that can live for 12–15 years.

The Dutch Shepherd Dog breed is native to the southern region of the Netherlands. He is also known as Dutch Herder, Dutchie, and Hollandse Herdershond. Originally bred in the 1800s, this medium- to large-size dog was dubbed as the “Jack of All Trades.”

Although the Dutch Herder Dog mainly worked as a shepherd dog herding flocks of sheep, he could also perform other tasks. He guarded the kitchen garden against hens, pulled carts of milk or produce to the market, and watched over children and his owner's property.

The first Dutch Shepherd Dog breed standard was established on the 12th of June 1898. However, in 1914, changes were made, stating that the breed should only sport a brindle coat.

This is to make the Dutch Herder Dog distinguishable from similar breeds, namely the German Shepherd and the Belgian Shepherd.

The need for shepherd dogs in the Netherlands dwindled during the 1900s. Around this time, industrialisation was growing, and reclamation of lands for alternate uses became very common.

The Dutch Shepherd Dog lost his original purpose as a herding breed. Fortunately, he is a highly versatile dog, and people found plenty of uses for him.

The Dutch Shepherd Dog breed transitioned from driving livestock to carrying out military and police work. Tragedy struck on the breed in the 1940s to 1950s as they were nearly wiped out.

World War II halted Dutch Shepherd Dog breeding in the Netherlands. Countless dogs were neglected and died due to starvation. Some were sent to Germany for military use.

The Dutch Breed Club tried to save the Dutch Shepherd Dog after the war. This dog breed was rescued from imminent extinction, but he still remains a rare breed.

Large numbers of Dutch Herders can be found in the province of Brabant in the Netherlands. However, outside their native country, these hardworking and versatile dogs are barely known.

Despite the Dutch Shepherd Dog breed's rarity, he is slowly becoming acknowledged by major kennel clubs. In 1995, this working dog was officially recognised by the United Kennel Club and was classified under the Herding Group.

This was followed by the American Kennel Club, which welcomed the Dutch Shepherd Dog breed into its Miscellaneous Class Group.

This dog breed's club in the US is called the American Dutch Shepherd Association, which was established in 2010. This dog breed is yet to be recognised by the Kennel Club.

Today, Dutch Shepherds still retain their herding skills and are still used for this purpose. However, they are also very skilled in other canine jobs and excel in police and military work. They are also skilled as search and rescue dogs and guide dogs for the blind.

What breeds make a Dutch Shepherd?

The ancestry of the Dutch Shepherd is mostly unclear. But it is known that they are naturally occurring shepherd dogs.

It is speculated that the Dutch Herder Dog is a descendant of continental herding dogs that contributed to the creation of Belgian Shepherds and German Shepherds.

The Dutch Shepherd Dog breed has a firm and sturdy body. He has a flat forehead and dark almond eyes. His muzzle is slightly longer, and his teeth have a strong scissor bite. He possesses midsized ears that stand upright.

The Dutch Herder Dog’s chest is deep, whilst his belly is slightly tucked up. He has oval-shaped feet with strong, arched toes. His nails and paw pads are black.

When it comes to the Dutch Shepherd breed's coat type, it comes in 3 different hair types. These are short hair, long hair, and wire hair.

Dutch Shepherd Dogs with short hair are very common in Holland, whilst the long hair variety is relatively rare. However, wire hair, also known as rough hair, is even rarer and is at risk of becoming wiped out.

Blue brindle is accepted in the Wirehaired Dutch Shepherd Dog variety. White-colored coats are possible in the breed too, but these are rare to find.

Each Dutch Shepherd coat type requires different brushing routines. Shorthaired ones only need occasional brushing, whilst Longhaired ones need to be brushed once a week.

When grooming Wirehaired Dutch Herders, use a coarse comb than a brush. These dogs need their coats combed 2–3 times a week and need to be hand-stripped twice a year.

Daily brushing should be done for all of the Dutch Shepherd Dog breed's coat types during shedding season. This occurs twice a year—in spring and autumn. Only bathe him when he has accumulated too much grime and dirt or starts to smell.

Brushing the Dutch Herder Dog’s teeth should be done every day, if possible. Trim his nails weekly. Check his ears for infection and clean them once a week. Also, clip excess hair on his ears to prevent harmful bacteria from thriving.

Dutch Shepherds are energetic and lively dogs that can get along well with humans and other pets.

Much like most shepherd breeds, Dutch Shepherd Dogs have a natural tendency to herd smaller children and animals. Their nipping and chasing urges can be inhibited through consistent training.

The Dutch Shepherd is a highly intelligent breed and eager to please. Some experts will argue that he is one of the smartest Shepherd breeds. This tireless working dog also loves carrying out various tasks, making him very trainable.

Dutch Herders need strong and firm leadership to guide them in training. Wishy-washy dog owners will be ignored and met with stubbornness.

Thus, it is important to establish yourself as the leader of the pack. By being at the top of the hierarchy, your dog will more likely trust and follow your commands.

Training sessions of the Dutch Herder Dog should be short but engaging. Incorporate a positive reinforcement method to keep your dog focused.

Never opt to use painful and rough training methods as it can damage your Dutch Shepherd Dog’s trust in you. It will also lead him to develop destructive behavioural problems that can greatly affect his well-being.

Is a Dutch shepherd a good family dog?

Yes, the Dutch Shepherd is a good family dog. Fanciers of the breed describe him as affectionate, loving, obedient, lively, and alert.

The Dutch Herder Dog cherishes his family and loves being a part of their day-to-day activities. He is great with children, so long as they treat him with gentleness and respect.

No, Dutch Shepherds are not aggressive, but they can be protective of their family. For this reason, they work well as watchdogs and guard dogs.

To ensure that Dutch Herders channel their guarding skills properly, they need to undergo socialisation and obedience training at a young age.

The Dutch Shepherd Dog is a medium-to-large breed. So he requires around 1,050–1,875 calories per day. He needs 2–3 cups of high-quality dog food per day. Make sure to choose one that is specifically formulated for his size and age.

Obesity is very prevalent in most dog breeds. To keep your Dutch Herder Dog from overeating, divide his meals into 3 equal portions. Serve these smaller meals to him throughout the day.

Keep your Dutch Herder Dog well-hydrated by ensuring that there is enough fresh water for him throughout the day.

As herding dogs, Dutch Shepherds have high energy levels. They need mental and physical exercise for at least 1 hour a day.

Regular walks, hikes, jogs, and runs are great ways to tire Dutch Herder Dogs out. Incorporate games such as obstacle course and hide-and-seek in their regular exercise routine too.

Daily exercise is a must for this active and athletic pooch. Otherwise, he will turn into a destructive dog because of boredom and pent-up energy.

The Dutch Shepherd Dog breed existed naturally, and human intervention in his breeding was only brief. Thus, he is quite a hardy canine that has no serious genetic health conditions. However, a few minor diseases are observed in the breed, including:

Large and giant dog breeds like the Dutch Herder Dog are prone to developing this condition. Affected dogs will experience mobility problems, joint pains, and lameness. Fortunately, this disease is not fatal and is curable through proper medication and surgery.

Dutch Shepherds are highly sensitive to anaesthesia. For this reason, Netherlands released a guideline instructing that these dogs should be administered with half a dose of anaesthesia only.

It is a rare eye disorder that usually affects Longhaired Dutch Herders. Goniodysplasia hinders the flow of fluid to the eyes, which may lead to blindness.

Dutch Shepherd breeders should screen potential parents for this condition. Dogs that are highly susceptible to this disease should not be used for breeding.

At what age do Dutch Herders calm down?

Generally, most dogs calm down when they are around 2–3 years of age. However, do not take our word for it, as it does not apply to all dogs.

Some Dutch Herders will remain extremely energetic for the rest of their lives. The best thing to manage this is to tire them out with lots of daily exercise.

How long do Dutch Shepherds live?

A Dutch Herder Dog has an average lifespan of 13–15 years. Keep him healthy and happy by consistently providing his daily needs.

The Dutch Shepherd Dog should have healthy and balanced meals, sufficient exercise, and a stress-free living environment. Regular vet check-ups should also be a part of your dog's routine to keep track of his health.

The Dutch Shepherd Dog breed needs large meals because of his size. You will need to spend around £400–£500 for your Dutch Herder puppy's food every year.

Getting the Dutch Herder Dog quickly acclimated to his new home will require basic dog supplies such as a bed, toys, lead, and crate. The overall expenses for these items are around £100–£400.

Taking care of your Dutch Shepherd puppy involves routine visits to the vet. Each check-up session will cost you approximately £30–£60.

Consider getting your Dutch Shepherd puppy insured as it will lessen expenses during vet emergencies.

If you opt for a lifetime coverage, the monthly fee will cost you around £18 to over £80. If you choose a time-limited pet insurance coverage, you will need to spend approximately £15–£20 a month.

Note that the pricing can change depending on your Dutch Herder’s health, age, and the area where you a residing.

Dogs that are old or sickly have higher pet insurance fees than healthy and younger canines. The cost of dog insurance in London tends to be more expensive compared to Wales and East Midlands.

How much does a Dutch Shepherd cost?

The Dutch Shepherd price range between £1,000 and £2,200. Buy your Dutch Herder puppy from a reputable breeder.

Also consider adopting a puppy from a dog shelter or Dutch Shepherd rescue organisations. There are so many dogs that have been neglected and waiting for their new human pack. 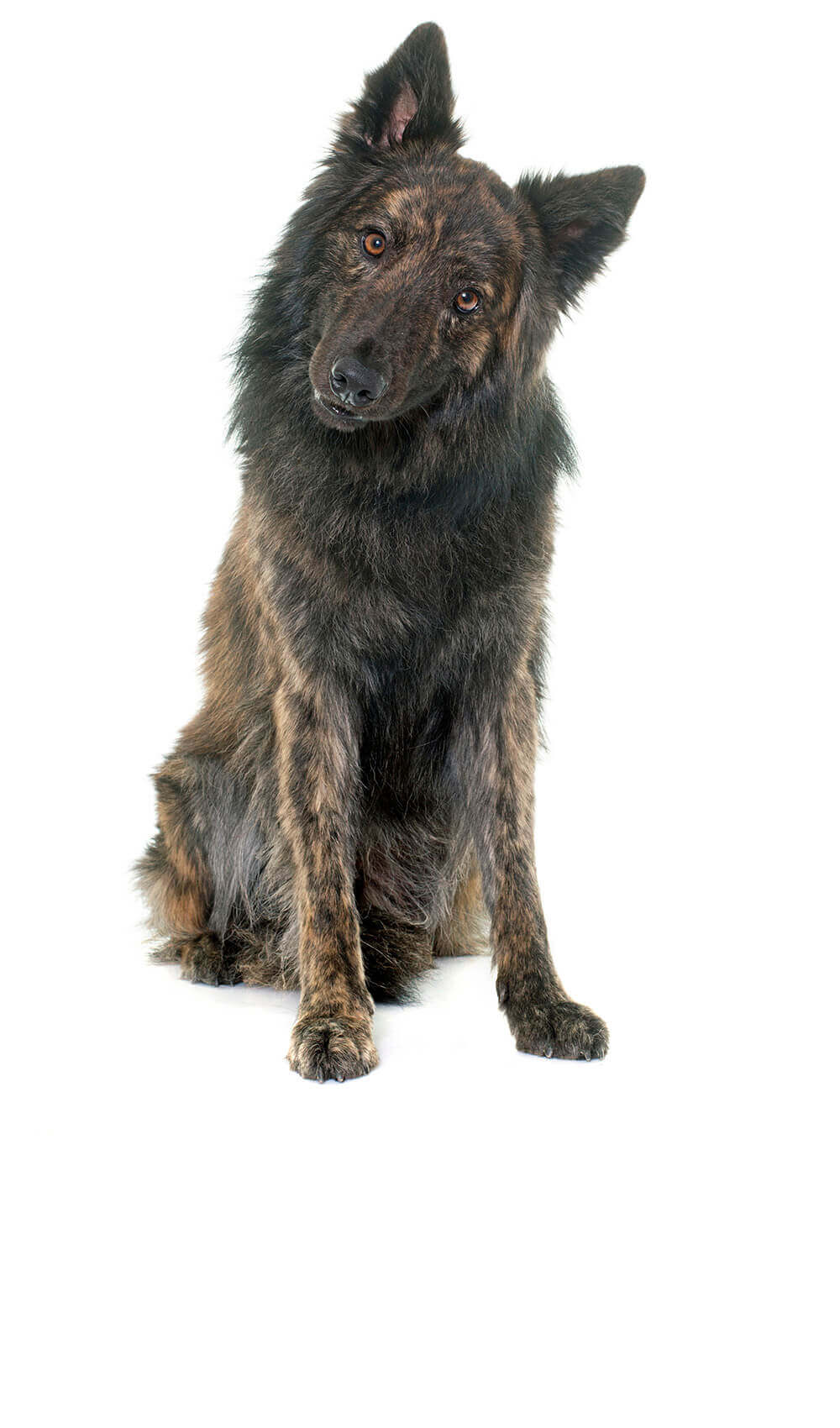 Are you sure the Dutch Shepherd is the best breed for you? Take the Pet Breed Selector Quiz to find your perfect breed match.

Dog Breed Selector Quiz
Disclaimer:
The information, including measurements, prices and other estimates, on this page is provided for general reference purposes only.
Doxiepoo
English Bull Terrier
Contents
Not the breed you're looking for? Click Here
Latest Stories

Dog breeds come in different price tags. However, a cheaper breed of dog does not mean you will get less for your money. We have listed down the 10 … END_OF_DOCUMENT_TOKEN_TO_BE_REPLACED