Thinking of buying or adopting a Flat Coated Retriever?

If the description matches your personality and lifestyle, read on to learn more about this dog's background.

Due to the flat-coated retriever's bouncy nature, the earliest of its breed was a dog called Old Bounce. Old Bounce was the first dog that provided its owner, a gamekeeper named J. Hull, a strain to develop flatcoats in 1864.

However, much to J. Hull's dismay, the people primarily credited to the breed's development were S.E Shirley and H.R Cooke, whose work developed the stable, fine field and show flat-coated retrievers we see today. The flatcoat was the most favoured hunting dog through the end of World War I until the Labrador, and golden retriever breeds stole the flatcoat’s accolade. With this decline in popularity, the flatcoat breed also declined in numbers. In mid-1960, some of the breed's enthusiasts were able to save it from the brink of extinction, but sadly it never regained its lost popularity.

The flat-coated retriever is a splendid sporting dog with a shiny black coat, albeit it also appears in dark liver colours. This breed is considered a large dog, standing 56–61 centimetres at the withers and weighing 55–70 pounds. It is lean, athletic, and highly energetic. The head is nicely formed and defined as 'of one piece.' It has a flat skull, and the back part is about the same length as its muzzle. Its eyes are almond-shaped, either hazel or dark brown in colour, with an intelligent and friendly expression. The ears are well set, relatively small, pendant-shaped, and lying close to the head. This breed must be angular from the front and rear to allow for open and graceful movement.

The flatcoat is outfitted in a thick coat that is straight, flat, and moderate in length, able to protect the breed from water and harsh weather. Its coat is slightly heavier around the neck, whilst there is feathering on the ears, chest, front, thighs, backs of the forelegs, and tails, but should never be excessively long. The flatcoat comes in solid black, liver, or deep reddish brown colours. Since the flat-coated retriever has a medium to long coat, it needs to be brushed daily to avoid mats and tangles from forming, most particularly when it is shedding.

Also, don't forget other grooming regimens aside from coat care. Trim its nails at least once a month to avoid painful overgrowth and getting your shins scratched. Ears must also be cleaned with a soft cotton moistened with a vet-approved solution to prevent infection. Brush the flatcoat's teeth at least twice a week to remove tartar and bacteria that may develop into an infection.

An intelligent and compliant breed, the flatcoat responds well to training. The dog breed is also active, bouncy, and goofy, making it a great companion for owners with an active lifestyle. If given adequate exercise, the flat-coated retriever should not exhibit negative habits such as unnecessary chewing and barking.

The flatcoat will shower its family with affection. It is also sociable with strangers, which makes it a poor watchdog. And it is not only friendly with strangers, but also gets on well with other household pets, including cats, despite its history of being an all-around hunting companion. It is very friendly with active older children, but can be overwhelming for younger children. It is important that any interaction is supervised by an adult to avoid it from accidentally knocking over the young children.

The flatcoat needs enough space to move around, whether indoors or outdoors. This dog is a great choice for new owners because it is easy to train and eager to please. Owners must also take note that a flatcoat is high-maintenance when it comes to its exercise needs and will require a lot of mental stimulation to become happy and well-rounded.

A typical serving for an adult flat-coated retriever is 3.5–4.5 cups of premium dry dog food daily, split into two meals. The quantity of food and the frequency of feeding for the flatcoat will largely depend on its age, weight, metabolism, level of activity, and health factors. It is best to consult with a veterinarian first if you are in doubt about its nutritional needs.

As a rough guide, see below the typical calorie needs of an adult flatcoat:

The flat-coat retriever is a large and active dog that requires nutrition to support muscle growth. It is highly recommended that its diet consists of high amounts of protein such as raw meat.

The flat-coated retriever is generally healthy and lives up to ten years. In comparison with other breeds, it has a low incidence rate of hip and luxating patellas. It is more prone to develop some types of cancer such as hemangiosarcoma, lymphosarcoma, osteosarcoma, and malignant histiocytosis. Bloat is also a cause for concern for this breed, as with other large breeds.

The flat-coated retriever has a lot of energy to spare, so it is important that it is given enough time to let off steam and use up its energy either playing or working outdoors. It will require sixty to ninety minutes of daily exercises. As it is with all active dog breeds, a flatcoat will likely escape if given a chance, so make sure that any outdoor activities are done within the confines of a well-fenced backyard.

Getting a well-bred Flat-coated Retriever pedigree puppy can cost you at least £700. To ensure it stays healthy, you will need to pay £50 to £60 a month on high-quality dog food. You also need to factor in the initial cost for dog accessories and equipment such as bowls, leads, collars, and beds, which will likely be about £200 depending on the brand.

As to healthcare you need to be prepared in case your dog suddenly falls ill or gets into an accident. You can offset some bills if you get a pet insurance, which can range from £25 for a time-limited cover up to £50 for a lifetime one. These prices vary depending on your dog’s health and age, the type of cover you choose, and whether it has pre-existing conditions.

Other outgoings to consider are veterinary expenses that may not be included in a pet insurance coverage such as vaccinations, routine checks, neutering or spaying, and annual boosters, which can have a combined cost of £800-£1000 annually. In a rough estimation, you will be setting aside £80–£100 a month for recurring expenses, depending on the type of insurance cover you choose for your dog.

Are you sure the Flat coated Retriever is the best breed for you? Take the Pet Breed Selector Quiz to find your perfect breed match.

Are you ready to take home a flat-coated retriever? If you are not 100 per cent sure, try our Pet Finder for more suggested breeds.

Disclaimer:
The information, including measurements, prices and other estimates, on this page is provided for general reference purposes only.
Finnish Spitz
Fox Terrier
Contents
Not the breed you're looking for? Click Here
Latest Stories

Socialising adult dogs may seem like a daunting task as some full-grown pooches are set in their ways. However, all hope is not lost. There are many … END_OF_DOCUMENT_TOKEN_TO_BE_REPLACED 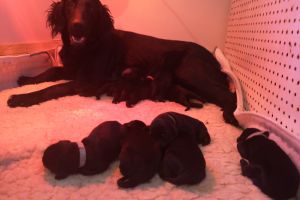