Searching for a Glen Of Imaal Terrier?

The Glen of Imaal terrier, also known as Glen, is a terrier dog hailing from Glen of Imaal, Ireland’s Wicklow Mountains. He is primarily bred to hunt foxes, badgers, and rodents in the area. The breed is also used to manoeuvre a dog-wheel, which is used to turn the meat over the fire.

The Glen is a calm and even-tempered breed that is less vocal compared to most terriers. His easy-going personality makes him an ideal companion dog for families and the elderly. Because of his terrier blood, the Glen has a stubborn personality and can be challenging to train.

An active dog with a moderate energy level, the Glen needs at least thirty to forty minutes of exercise and mental stimulation. Since the Glen sheds lightly, once a week of brushing will suffice to keep his coat healthy and free from mats.

The Glen of Imaal terrier was actually named after a place where it was developed, a remote valley in the western Wicklow Mountains of Ireland called Glen of Imaal. Its creation is a result of a rebellion in Ireland in 1798.

After Queen Elizabeth I hired French and Hessian soldiers to put a stop to the rebellion, many of the soldiers were awarded lands for their service and settled in the Wicklow area. They brought their low-slung hounds with them that they bred with local terriers to develop what is now a distinct breed known as the Glen of Imaal terrier.

The breed was originally developed as a multipurpose hunter and was utilised to hunt foxes, badgers, and rodents. Its tenacious spirit also took the breed to participate in organised dogfights. In addition, the Glen of Imaal terrier fills the role of a turnspit dog, where it worked on a treadmill-like contraption (also called a dog wheel) to turn meat over fires whilst cooking.

The Glen of Imaal terrier was recognised by the Irish Kennel Club in 1933, making it the last Irish terrier to be recognised in Ireland. Then in 1975, the British Kennel Club also recognised the breed, whilst the American Kennel Club followed suit twelve years later in 1987. Today, the Glen breed is gaining popularity as it proves to be an excellent family dog whilst retaining its traditional role of a silent hunting companion.

The Glen of Imaal terrier has a short stature, but big in size. It is often referred to as ‘the big dog on short legs’ since its body is longer than its length with a standard height of 30–36 centimetres and a weight of 35–40 pounds. Its form is attributed to a structural disorder called achondroplasia (dwarfism). However, this genetic anomaly gives the breed a nice and gentle appearance.

The Glen of Imaal terrier has a large head, strong foreface, and a muzzle that tapers to the tip of its black nose. This dog breed also has a well-defined stop and medium-size brown eyes that are set well apart to add to its charming appearance. Its ears are small and are half-pricked (folds over) when the Glen is happy or alert. Its distinctive feature is its front feet, which are turned out.

When it comes to its coat, the Glen of Imaal terrier is outfitted with a medium-length double coat. Its topcoat is harsh to touch, whilst the undercoat is soft. The accepted breed colours for the Glen of Imaal terrier are blue, brindle, and wheaten. The Glen doesn't shed much and only needs to be brushed every week to keep its coat in good condition. It is also recommended to hand-strip the Glen of excess hair from its hard coat at least twice per year. Also include the following in the usual grooming regimen: nail trimming, ear care, and dental hygiene.

If you're looking for a brave, intelligent, and agile dog breed that is not noisy, then the Glen of Imaal terrier is for you. The Glen is fearless, protective, and focused, but at the same time it is a playful and docile family companion dog, especially with children. It is generally a quiet breed and is highly prized for hunting in silent swiftness. The Glen also has a stubborn streak that is typical of a terrier breed. However, it is an intelligent dog and responds well to firm instruction. Although of even temperament, the Glen doesn't incite fights with other dogs, but it will not back down either.

When it comes to children, the Glen of Imaal terrier is good-natured and well-behaved. However, it is important that interaction between the two is supervised to make sure that neither gets hurt unintentionally.

It is well-suited to any homes, whether in a large rural home or a small urban home. The Glen must be kept on a lead when outside. Some would argue that even a fence will not be able to stop this dog when its prey drive kicks in. With this said, the Glen will not hesitate to give chase to smaller animals. Although it can live with cats and other dogs if it was raised alongside them.

A typical serving for an adult Glen of Imaal terrier is 1.5–2 cups of quality dry dog food daily, divided into two meals—morning and afternoon. One can never be sure about the real nutritional need of a dog unless you consult with a veterinarian. It is important to recognise that each dog has different dietary needs depending on its size, age, health, metabolism, and activity level.

For example, stated below are the typical daily calorie needs of an adult Glen that weighs 35 pounds.

The Glen of Imaal terrier deserves only high-quality food formulated for its specific size. Choose a dog food that is not only popular but also recommended by a veterinarian.

The Glen of Imaal terrier is a very healthy breed in general with a lifespan of ten to fourteen years, but still, it can be predisposed to a few genetic problems. These genetic issues include hip dysplasia, elbow dysplasia, progressive retinal atrophy, hypothyroidism, and von Willebrand disease. However, take note that not every veterinary consultation is a genetic problem. The Glen can also suffer from allergies, skin itchiness, and related ear infections. So if you find anything that is not normal with your Glen, immediately consult a veterinarian.

The Glen of Imaal terrier is an intelligent and energetic dog breed, and as such, it will need an adequate amount of physical and mental stimulation. Take the Glen out for a walk or let it play outdoors for at least thirty to forty minutes. However, make sure that it is always in a safe environment with secured fences.

Getting hold of a Glen of Imaal Terrier may take some time as very few puppies are registered with The Kennel Club every year. If you are looking to own a Glen, prepare to go on a waiting list and pay at least £500 for a well-bred pedigree puppy. To ensure that it stays healthy, you will need to spend £20 to £30 a month on high-quality dog food. You also need to factor in the initial cost for dog accessories and equipment such as food bowls, leads, collars, and beds, which will likely be about £200 depending on the brand.

As to healthcare, you need to be ready in case your dog suddenly falls ill or gets into an accident. You can offset some bills if you get a pet insurance, which can range from £20 for a basic cover up to £40 for a lifetime one. These prices vary depending on your dog’s health and age, the type of cover you choose, and whether it has pre-existing conditions.

Other outgoings to consider are veterinary expenses that may not be included in a pet insurance coverage such as vaccinations, routine checks, neutering or spaying, and annual boosters, which can have a combined cost of £800-1000 annually. Roughly, you will be setting aside £50–£80 a month for recurring expenses, depending on the type of insurance cover you choose for your dog. 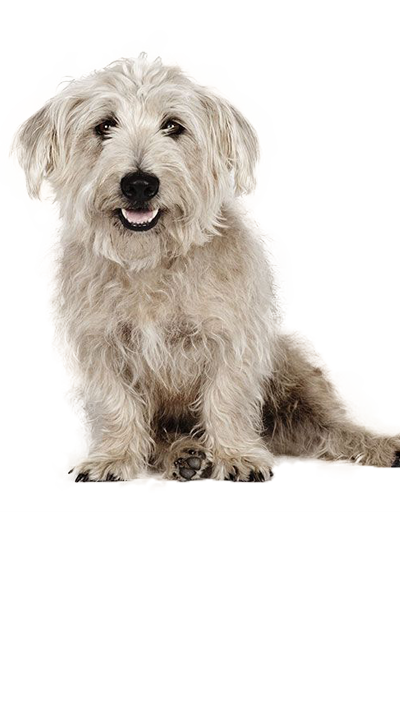 Are you sure the Glen of Imaal Terrier is the best breed for you? Take the Pet Breed Selector Quiz to find your perfect breed match.

Have you decided to get a Glen of Imaal terrier? If you’re not sure, check out our Pet Finder for more of dog breeds that suit your lifestyle.

Disclaimer:
The information, including measurements, prices and other estimates, on this page is provided for general reference purposes only.
Giant Schnauzer
Goldador
Contents
Not the breed you're looking for? Click Here
Latest Stories