Thinking of buying or adopting a Goldador?

The Goldador, also known as Golden Labrador, is a hybrid breed, a cross between the golden retriever and Labrador retriever. The Goldador was originally developed to create a sensitive and tolerant working dog breed.

Apart from being a highly capable hunting dog, the Goldador is an amazing service dog and a delightful family pet. His affectionate and loyal nature garnered him a growing number of fans. Smart and eager to please, the Goldador is very easy to train.

The Goldador is an athletic dog similar to both of his parent breeds. An hour of exercise and mental stimulation will effectively tire the Goldador out and keep boredom away. The Goldador is a low-maintenance dog that sheds throughout the year. Weekly brushing is recommended to keep his coat clean and shiny.

The first Goldador was first developed more than ten years ago by crossing the Labrador retriever and the golden retriever. The purpose of its creation was to develop a new working dog breed that is sensitive and tolerant. It has yet to gain popularity and has not been recognised as a breed by any international organisations including the Kennel Club.

Since the Goldador is not recognised as a breed, there is no standard size, colour, coat, and characteristics that breeders follow. However, its appearance can be determined based on the unique features of its parentage, the golden and the Labrador. Some Goldadors may tend to have the appearance of either parent, but normally its head is square and flat with a wide muzzle. It has long, floppy ears that drop toward its cheeks. The eyes are oval-shaped and are in different shades of brown. The nose is mostly black. The Goldador is typically a larger breed that weighs 60–80 pounds and stands 59–61 centimetres at the withers.

The Goldador wears a short, close-lying, double-layered coat, where the topcoat is short and thick whilst the undercoat is dense and soft (some with wavier hair). Generally, coat colours vary and include cream, gold, black, liver, and chocolate. Goldador is low-maintenance when it comes to grooming, although it sheds throughout the year and more during spring and autumn. Regardless, a weekly brushing to keep its coat from collecting loose and dead hair will suffice.

Other grooming regimens must not be overlooked to maintain the Goldador’s overall health. Brush its teeth regularly, at least twice a week, to prevent tartar build-up, bad breath, or worse, dental and gum diseases. Its nails must be trimmed to avoid overgrowth, which is painful especially when a nail snags or is caught on carpets and upholstery. Ears must also be cleaned with a vet-approved solution to prevent infections.

Being a mixed breed, the temperament of a Goldador will not be as certain as purebred dogs. However, looking at the personalities of its parent breeds will help understand what type of temperament to expect from a Goldador. This hybrid breed is known to be very affectionate, loyal, playful, and happy. It is also alert enough to make a superb watchdog. However, its sociable nature does not make it an efficient guard dog. The Goldador loves to be with people and will like nothing more than to be a part of everything that goes on in a household.

Sociable by nature, the Goldador is eager to please, making it highly trainable. Although it can be suitable for new dog owners, this type of breed will need an owner that can shower it with attention and provide proper canine training, which it will enjoy. It is smart and so it excels in canine sports such as fly ball, agility, and obedience trials.

When it comes to getting along with children, the Goldador is the best pet. This breed loves children and will make an excellent playmate. However, care must still be observed, and playtime must be supervised to make sure that accidents are avoided. Also, the Goldador is equally good with other dogs and household pets. Overall, the Goldador is an amazing companion dog.

A typical serving for an adult Goldador is 3.5–4.25 cups of premium dog food (spread over two meals), which will depend on its size. But size isn't the only factor to consider when it comes to a Goldador’s nutritional requirement. Age, activity level, health, and metabolism matter as well to provide the dog with a balanced diet. If in doubt, make sure to consult a veterinarian.

Here are the typical calorie needs per day of an adult Goldador weighing 70 pounds:

Don't allow the Goldador to be obese by free-feeding it. Large meals that are not measured will predispose the breed to bloat or gastric torsion, and at the same time too much weight can put pressure on its joints. Always consult a veterinarian or a canine nutritionist for their recommendations.

Many believe that most hybrid dogs are healthier than their purebred counterparts. However, it lacks proof to support that concept. However, it is true that the Goldador can possibly inherit any of the health issues of its parent breeds. Some genetic issues may include hip and elbow dysplasia, cataracts, diabetes, and progressive retinal atrophy.

When it comes to its exercise needs, the Goldador is an active dog breed, inheriting the stamina of both parent breeds. This mixed breed will require plenty of exercise and mental stimulation to be healthy and happy. The Goldador will like nothing more than to be taken for a brisk walk, run, or jog with its owner. It will need at least an hour of daily exercise to burn the energy away. However, make sure that it is always within a safe and secure fenced yard. When given a chance, it will think of escaping to seek some adventures.

A well-bred Goldador pedigree puppy from a reputable breeder normally costs about £500 or higher. To ensure that it stays healthy and well-fed, you will need to spend £40 to £50 a month on high-quality dog food. You also need to factor in the initial cost for dog accessories and equipment such as food bowls, leads, collars, and beds, which will likely be about £200 depending on the brand.

As to healthcare, you need to be prepared in case your dog suddenly falls ill or gets into an accident. You can offset some bills if you get a pet insurance, which can range from £25 for a basic cover up to £45 for a lifetime one. These prices vary depending on your dog’s health and age, the type of cover you choose, and whether it has pre-existing conditions.

Other outgoings to consider are veterinary expenses that may not be included in a pet insurance coverage such as vaccinations, routine checks, neutering or spaying, and annual boosters, which can have a combined cost of £1000 annually. Roughly, you will be setting aside £70–£120 a month for recurring expenses, depending on the type of insurance cover you choose for your dog. 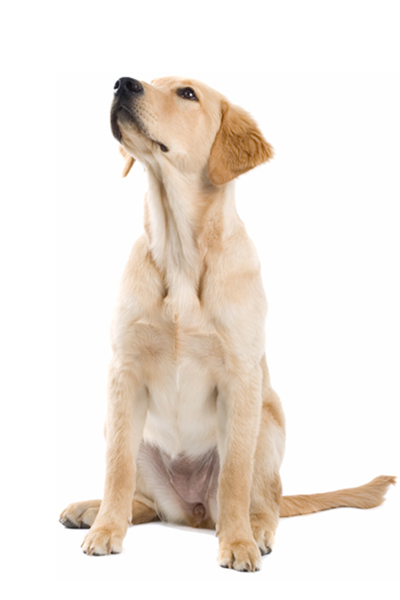 Are you sure the Goldador is the best breed for you? Take the Pet Breed Selector Quiz to find your perfect breed match.

Do you have doubts about getting a mixed breed such as a Goldador? Let us help you find other dog breed options using our Pet Finder.

Disclaimer:
The information, including measurements, prices and other estimates, on this page is provided for general reference purposes only.
Glen of Imaal Terrier
Golden Retriever
Contents
Not the breed you're looking for? Click Here
Latest Stories 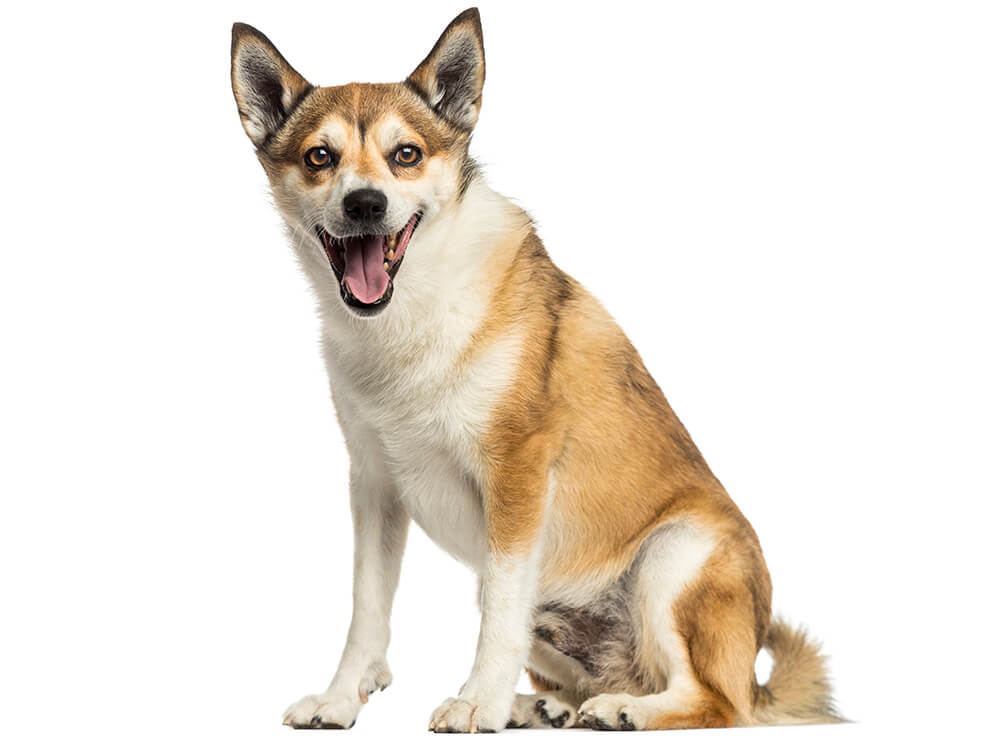 Many rare dog breeds have gone to near extinction in the past, leaving them few in number. They are so scarce that estimations can only be made about … END_OF_DOCUMENT_TOKEN_TO_BE_REPLACED 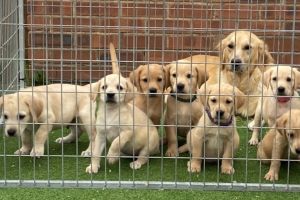 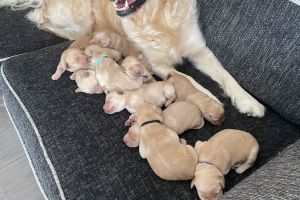 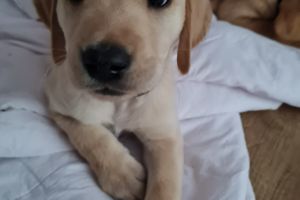 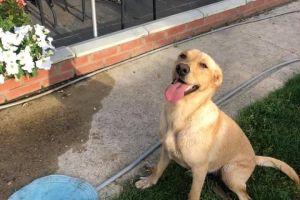