Thinking of buying or adopting a Greenland Dog?

The Greenland dog becomes a very loving companion once trust is established between him and his family. Although he can be wary of strangers, the Greenland dog would rather stay away than linger near them. This makes him not the best choice for a guard dog or a watchdog.

The Greenland dog is an intelligent, independent, high-energy dog and likes nothing more than to be put to work. As such, he is not best suited to first-time dog owners. Since he is a seasonal shedder, the Greenland dog needs frequent brushing when it occurs. After that, weekly brushing will suffice.

The Greenland dog is believed to be an ancient breed that arrived in Greenland four thousand years ago. It is thought that the Greenland dog, including the Canadian Eskimo dog, descended from ancient canine breeds associated with the Thule people, who relied on sled dogs for transportation in Siberia. Though Greenland dog has been around for centuries, the breed made its first appearance in the UK around 1750. It became popular as a versatile working dog breed and has participated in the Darlington dog show in 1875.

The Greenland dog is a robust and heavy-built dog with a wolfish appearance. It has a broad, wedge-shaped head, small, pricked, triangular ears, slightly tilted eyes that show its keen and fearless expression, and black or brown nose that follows the colour of its coat. Its muzzle is somewhat long, gently tapering toward the nose. This Arctic dog breed has muscular and sturdy legs that are covered with shorter hair compared to the rest of its body. It has a well-muscled shoulder, deep chest, well-sprung ribs, and a large bushy tail that rolls across its back.

When it comes to its coat, the Greenland dog wears a thick, double-layered coat that is medium in length. The undercoat is dense, soft, and woolly, providing warmth, whilst the topcoat is long and coarse to protect against the cold. Its hair, neck, withers, and the underside of the tail have longer hair than in other areas of the body such as its legs, head, and underbelly. Its coat comes in several colours, which could be various combinations of white, brown, black, red, and grey.

Coat care is relatively easy to do despite its thick coat. Brushing its coat at least twice a week will suffice, to remove dead and loose hair and keep its coat dirt-free. However, frequent brushing is needed during the shedding season, when it sheds more during spring and autumn. The rest is basic grooming, which includes trimming the nails to avoid painful overgrowth, brushing the teeth to minimise tartar build-up and prevent gum disease, and lastly, checking its ears for signs of potential infection such as redness, pain, and bad odour.

Reserved and independent, the Greenland dog can also be an affectionate dog breed when it forms a strong bond with its owners. Since the breed remains a working dog, it is not contented to simply stay inside the house all day long. This dog breed needs to have a job or engage in vigorous activities such as running, jogging, and hiking. With that said, the Greenland dog demands ample space to be comfortable, so small city apartments is not fit for this breed.

The Greenland dog is also not suitable for family that has young children. This dog can be quite rambunctious in a home environment and will likely accidentally knock over toddlers during playtime. Any interaction with this breed and the children must be supervised at all times to avoid any accidents. When it comes to its relationship with other household pets, the Greenland dog, being a pack animal, is generally good around other dogs. However, it's not the same with smaller animals.

It is even-tempered and will rarely show any aggressive behaviour towards strangers and will prefer to keep its distance until it becomes familiar with them. Greenland dog is generally quiet and calm, which is why it is not an ideal guard dog. However, it will not hesitate to howl, not bark, when the mood suits it. It is not the best choice for inexperienced dog owners because this dog will need a steady handler to look up to for instruction and direction.

A typical serving for an adult Greenland dog is 2.5–3 cups of high-quality dry dog food per day. Divide it into equal halves—brunch and dinner. Don't simply take our word for it or any other online resources that you come across. Our best recommendation is to consult a veterinarian to find out the best dog food suitable for your Greenland dog.

As a rough guide, here are the typical calorie needs of an adult, 65-pound Greenland dog per day:

The Greenland dog is a medium-to-large dog breed, which should be fed with premium commercial dog food formulated for its size. Since it is a high-energy working breed, a diet that suits its activity level and size may be more appropriate. Keep in mind that Greenland dog is known to suffer from bloat, so strict feeding schedules must be followed.

The Greenland dog is a healthy breed that can live anywhere from ten to fourteen years. However, it is still predisposed to health conditions that are common to its breed. Make sure to have your Greenland dog checked for hip and elbow dysplasia, primary lens luxation, glaucoma, bloat/gastric torsion, and ear infections.

The Greenland dog has retained its purpose as a working dog, which means it requires plenty of exercise. It will need more than occasional walks in the park. Two hours' worth of exercise will suffice to keep it happy. You can take it on a run, jog, or hike so it can let off steam and use its energy. If you are not an active person and not fond of outdoor activities, we suggest that you find another dog breed.

If you are considering purchasing a Greenland dog, you may need to spend at least £500 for a well-bred pedigree puppy. Be ready to go on a waiting list as this breed is rare in the UK. Other than the initial purchase, you also need to consider getting a pet insurance, which can cost anywhere from £20 for a basic cover up to £45 a month for a lifetime cover.

Food cost is another matter since you need to ensure that your dog stays healthy and well-fed at every stage of his life. To buy high-quality dog food, you will have to spend around £20–£30 a month. You also need to factor in the initial cost for dog accessories and equipment such as bowls, leads, collars, and beds, which will likely be about £200 depending on the brand.

Other outgoings to consider are veterinary expenses that may not be included in a pet insurance coverage such as vaccinations, routine checks, neutering or spaying, and annual boosters, which can have a combined cost of £800-£1000 annually. On average, caring for a Greenland dog will cost about £70–£100 a month, depending on the type of insurance. This is exclusive of walking or grooming services that you might want to pay for later. 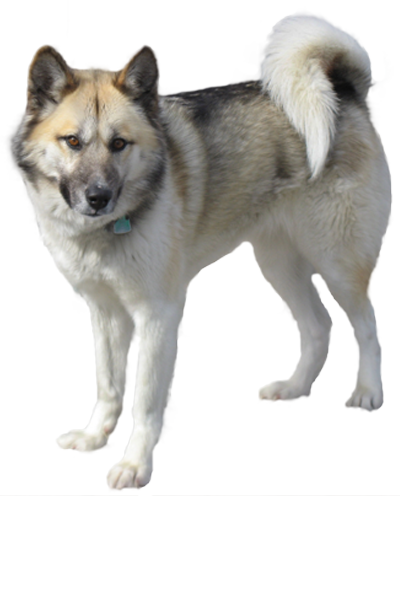 Are you sure the Greenland Dog is the best breed for you? Take the Pet Breed Selector Quiz to find your perfect breed match.

Do you think you can manage a headstrong and independent breed like the Greenland dog? With our Pet Finder, we can help you find other suitable breeds if you're in doubt.

Disclaimer:
The information, including measurements, prices and other estimates, on this page is provided for general reference purposes only.
Great Dane
Greyhound
Contents
Not the breed you're looking for? Click Here
Latest Stories

Lively, intelligent, and people-loving, the Australian Shepherd is a delightful breed filled with enthusiasm for life. There are growing numbers of … END_OF_DOCUMENT_TOKEN_TO_BE_REPLACED