Searching for a Huntaway?

The Huntaway, also known as the New Zealand Huntaway, is a large herding dog that can round up livestock making him a very reliable canine helper. Even-tempered and highly adaptable, the Huntaway is able to thrive in the home or at the farm.

The Huntaway is a devoted canine companion with a gentle disposition. Despite his barking tendencies, he is a very friendly dog. Affectionate and good with children, this breed is also a suitable choice for first-time dog owners.

The huntaway is generally a low-maintenance breed that requires minimal grooming and infrequent bathing. Due to the Huntaway’s floppy ears, regular ear cleaning is necessary to prevent debris build-up and ear infection.

The origin of the huntaway, also known as the New Zealand sheepdog, is hazy. What is certain, though, is that it is native to New Zealand. It is the favoured canine for driving huge masses of sheep in the country.

The NZ huntaway was developed in response to the different demands of herding livestock across the nation’s high country stations. Earlier canines—that is, British sheepdogs—tended to drive the sheep silently. However, sometimes it would bark at the herd—a characteristic that NZ farmers find desirable in the hilly terrain of the countryside. Sight-driven dogs would be less effective in such terrain as it may lose sight of the herd as it treads down inclines.

As such, shepherds got into breeding the ideal canine herder. It should be able to manage bigger flocks, which were too large for a collie, and have a lot of stamina. It also should not rely on sight herding. The huntaway later emerged.

What is a Huntaway Dog?

It has been said that the Rottweiler, Beauceron, Labrador, bloodhound, and German shepherd were added to the huntaway mix. This is difficult to confirm as this breed’s development was not documented. However, the huntaway dog is said to have existed at least a century ago.

This pooch got its name from the herding trial that this type of dog was usually brought to by its handlers. To this day, it has not yet been acknowledged as a distinct breed. Despite this, the huntaway has gained popularity amongst farmers in various parts of the world.

Its head is broad but proportionate to the rest of its body. Moderately wide, its ears are situated on top of its head and are carried back when sedentary. Its cheeks are not prominent or full and its muzzle is quite long but tapers to the nose. Its eyes, intelligent and keen, are medium-sized and positioned obliquely on its face. The eyes are rather almond-shaped and brown.

The huntaway’s neck is very strong and muscular, as well as its body and legs. It has a deep chest, from which its characteristic booming bark is produced. Its tail is moderately long. Its paws are well-padded and oval in shape.

This dog’s coat can be short, medium, or long in length. The fur may be glossy or rough to the touch. The coat usually comes in tricolour or black and tan colour combinations. Generally, its coat is easy to maintain as it only needs to be brushed once or twice every week. It sheds moderately, especially in the spring and autumn seasons.

The huntaway is renowned for its balanced temperament, loyalty, and kind demeanour. True to its trustworthy nature, it has been dubbed by some as ‘all bark and no bite.’

This breed is the kind that thrives on being given something to do. It has deep stores of stamina and energy, as well as a keen intelligence that it needs to be stimulated a lot. Otherwise, it can engage in undesirable pet behaviours just to occupy and amuse itself. Nevertheless, the huntaway can work independently and reliably.

Despite being bred for herding and farm work, this canine is adaptable enough to enjoy human companionship in the home.

Are Huntaways Good with Children?

It is so good-natured that it will greet strangers and gets along with children. As such, it does not make a very good guard dog.

First-time owners may find this canine a suitable pet, as long as they can fulfil its need for tremendous daily physical and mental stimulation.

Follow a set feeding schedule consistently, and provide the same food that your huntaway is used to in order to avoid gastric problems. However, if you need to shift to another type of high-quality food, do so gradually. This will help your pet adjust accordingly without complications. A huntaway puppy must be fed three to four times a day, whilst an adult one can be fed twice a day.

The adult huntaway weighing 25 kg should be fed about 250–320 g of food daily, also taking into consideration its activity level. For those that weigh 30 kg and above, the daily recommended portion ranges from 295 to 420 g.

The average huntaway lifespan is twelve to fourteen years. Although robust, it is known to be affected by the following health issues:

As a high-energy and intelligent dog, the huntaway should be exercised for at least an hour every day. It should be allowed to go off lead, provided that it is in a secure, fenced yard.

Huntaway puppies are not common in the UK and it is likely that you will go on a waiting list if you want one. Purchasing a well-bred Huntaway puppy may cost you a minimum of £500. To ensure it stays healthy at whatever age you need to feed it high-quality food, which can set you back £40-£50 a month. You also need to factor in the initial cost for dog accessories and equipment such as food bowls, leads, collars, and beds, which will likely be about £200 depending on the brand.

When it comes to healthcare, you need to be prepared in case your dog suddenly falls ill or gets into an accident. You can offset some medical bills if you get a pet insurance, which can range from £23 for a time-limited cover up to £44 for a lifetime one. These prices vary depending on your dog’s health and age, size and weight, the type of cover you choose, and whether it has pre-existing conditions.

Other outgoings to consider are veterinary expenses that may not be included in a pet insurance coverage such as vaccinations, routine checks, neutering or spaying, and annual boosters, which can have a combined cost of £1000 annually. Roughly, you will be setting aside £60-£110 a month for recurring expenses, depending on the type of insurance cover you choose. This estimate is also exclusive of walking or grooming services that you might want to use at times. 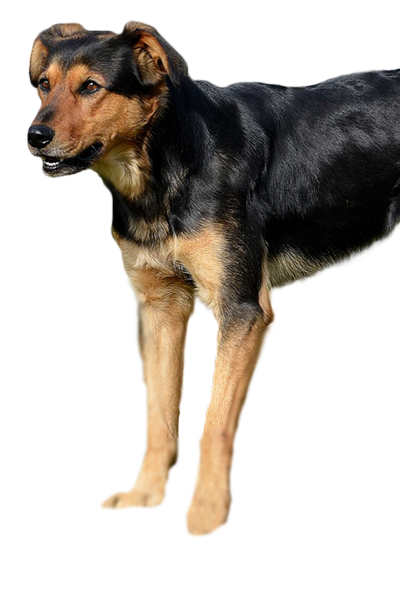 Are you sure the Huntaway is the best breed for you? Take the Pet Breed Selector Quiz to find your perfect breed match.

Are you not convinced that the huntaway is for you? Check out our Pet Finder for more suggested breeds that may suit you.

Disclaimer:
The information, including measurements, prices and other estimates, on this page is provided for general reference purposes only.
Hungarian Vizsla
Ibizan Hound
Contents
Not the breed you're looking for? Click Here
Latest Stories

Australian Shepherds were bred to be herding dogs that can withstand cold climates. They sport dense and thick double coats that provide them warmth … END_OF_DOCUMENT_TOKEN_TO_BE_REPLACED