Searching for an Irish Setter?

The Irish Setter is a dog breed under the Sporting Group, and as the name suggests is a native of Ireland. Its unique and striking deep red mahogany coat and full, glossy hair make it a favourite of the affluent set. The breed is officially recognised by the Kennel Club.

The Irish Setter has boundless enthusiasm, happy temperament, and superb hunting skills that attract dog enthusiasts who want an ideal family companion. He is extremely friendly and outgoing not only with his family but even to strangers. Because of the Irish Setter's affability and openness, he is not the best choice for a guard dog or watchdog duties.

The Irish Setter gets along well with children and other pets but their interactions require supervision. Being a sporting dog, the Irish Setter is full of energy and needs moderate exercise. The Irish Setter’s long coat requires frequent brushing to maintain lustre.

The ancestry of the Irish Setter dates back to the early 1700s in Ireland. While its origin is subject of debate, a few speculate that the breed is likely to be descended from a combination of the Irish Water Spaniel, the Irish Terrier, the Springer Spaniel and Pointers, also some of the other two Setters blood thrown in the mix such as the English Setter and the Gordon Setter.

It was bred to be a field hunting dog in Ireland, specifically as a pointer to locate birds with its strong scenting skill. However, the Irish Setter’s earliest ancestors were initially coloured red and white. In the 19th century, its solid red colouring attracted more enthusiasts since red is easier to spot during a hunt. Add in the influence of the stunning Champion Palmerston, a lithe, red-mahogany dog that pushed the influence of all-red dogs in 1862. Thus, began the red Irish Setter taking precedence as an ideal colour for further breeding until today.

Over the years, the breed gained fame more due to its physical beauty, as well as its easy-going and happy disposition. In the mid-1900s, the Irish Setter was highly sought after as a show dog than as a hunting dog.  Today, it is a favourite family companion, and sometimes a hunting dog. The breed has one time been the inspiration for Walt Disney movie and the books about "Big Red" in 1962. The Irish Setter is Kennel Club registered.

The Irish Setters are athletic dogs with glamorous appearance. They have an average height of 54 to 67 centimetres and weight of 60 to 70 pounds. They are refined and good-looking dogs that boast of lean, dome-shaped heads with long square muzzles, powerful jaws and dark mahogany/walnut or black nose with wide nostrils. Wearing kind and intelligent expressions, Irish Setters have almond-shaped eyes the colour of dark hazel or dark brown. Ears are moderate in size, set low and back hanging close to the dog's head.

Irish Setters also boast of a muscular form from their long arched necks to deep and sloping shoulders, straight sinewy front legs, deep chests, well-sprung ribs and well-muscled loans. Their tails are moderately long, naturally hanging below the level of their back when relaxed or standing just level to their back when alert or excited.

When it comes to their coats, the Irish Setters are outfitted with moderately long and glossy coat without curls or waves. They come in a red chestnut colour that is silky to touch. Other Irish Setters often sport a small amount of white colour on the chest, throat or toes. The coat requires frequent brushing to maintain its good condition and keep it matt-free. Other grooming requirements include a regular brushing of teeth, trimming of nails at least once a month, and ear checking and cleaning on a weekly basis. Doing all this grooming regimen will not only promote bonding but also help you determine underlying health issues such as infection and other diseases.

The Irish Setter is a playful and loving breed with a carefree attitude. It is outgoing and sociable and will enthusiastically greet visitors. Irish Setters love people, so it's not surprising that they are not the best guard dogs, although they are known to be protective when they think that their family is in danger. They are an active breed and will require enough mental and physical stimulation. It's better if the Irish Setter is given a job to do. When there is lack of activity for this breed, it tends to pick up negative and destructive habits.

Irish Setters get on well with children. They are also widely used as therapy dogs in hospitals and schools. Often they sit or lie on the floor with children as students read to the Irish Setter, creating a calming and relaxing atmosphere. Although in the household, care must be taken during interactive games since Irish Setters are known to be a bit rowdy. Always supervise playtime to make sure no untoward event will occur such as accidentally knocking over toddlers.

The Irish Setter also gets along well with other dogs. However, other animals can be in danger if this dog breed is not socialised early. Remember that the Irish Setter is a hunting dog, which means its prey drive won't just go away. Even with household pets like cats, guinea pigs and rabbits they grow up with, they will on occasion give chase when they become too excited.

A typical serving for an adult Irish Setter is 2 to 3 cups of prime quality dry dog food per day. Always remember that the best thing you can do to determine the most appropriate nutrition for your dog is to consult a veterinarian or a canine nutritionist. Certain factors will affect what and how much your Irish Setter will eat such as age, gender, size, health, activity level, and metabolism.

Regardless, here is a typical calorie needs of an adult Irish Setter that weighs 60 pounds:

The nutritional needs of medium to large dog breeds are different from small ones so look for dog food formulated for your dog's size. You can also prepare home-cooked food but make sure to select fresh ingredients rich in animal protein such as beef, chicken and salmon. To maintain the glorious coat of an Irish Setter include Omega 3 and 6 fatty acids in its diet.

The Irish Setter is generally a healthy dog breed, almost always in good shape for a hunt. It has a lifespan of 11 to 15 years and will possibly live that long if not suffering from any genetic or acquired diseases. For preventive measures, here are a few health disorders that an Irish Setter is predisposed to be potentially afflicted: Hip Dysplasia, Osteochondrosis Dissecans, Hypothyroidism, Canine Leukocyte, Epilepsy, Progressive Retinal Atrophy, Hypertrophic Osteodystrophy, Gastric Torsion or Bloat, and Panosteitis.

The Irish Setter is an active breed that requires a lot of activity to maintain its good temperament. Owners of this dog breed must be able to dedicate at least one hour per day to exercise and meet its activity requirement. The best environment for an Irish Setter is one with a large fenced yard since being a hunting dog means they will need enough room to run. The fence will also prevent it from escaping and following its scenting instincts.

Purchasing a well-bred Irish Setter puppy may cost you £500-£600. To ensure it stays healthy at whatever age, you need to feed it high-quality food, which can set you back £50-£60 a month. You also need to factor in the initial cost for dog accessories and equipment such as food bowls, leads, collars, and beds, which will likely be about £200 depending on the brand.

When it comes to healthcare, you need to be prepared in case your dog suddenly falls ill or gets into an accident. You can offset some medical bills if you get a pet insurance, which can range from £23 for a time-limited cover up to £40 for a lifetime one. These prices vary depending on your dog’s health and age, size and weight, the type of cover you choose, and whether it has pre-existing conditions.

Other outgoings to consider are veterinary expenses that may not be included in a pet insurance coverage such as vaccinations, routine checks, neutering or spaying, and annual boosters, which can have a combined cost of £1000 annually. Roughly, you will be setting aside £80-£110 a month for recurring expenses, depending on the type of insurance cover you choose. This estimate is also exclusive of walking or grooming services that you might want to use at times. 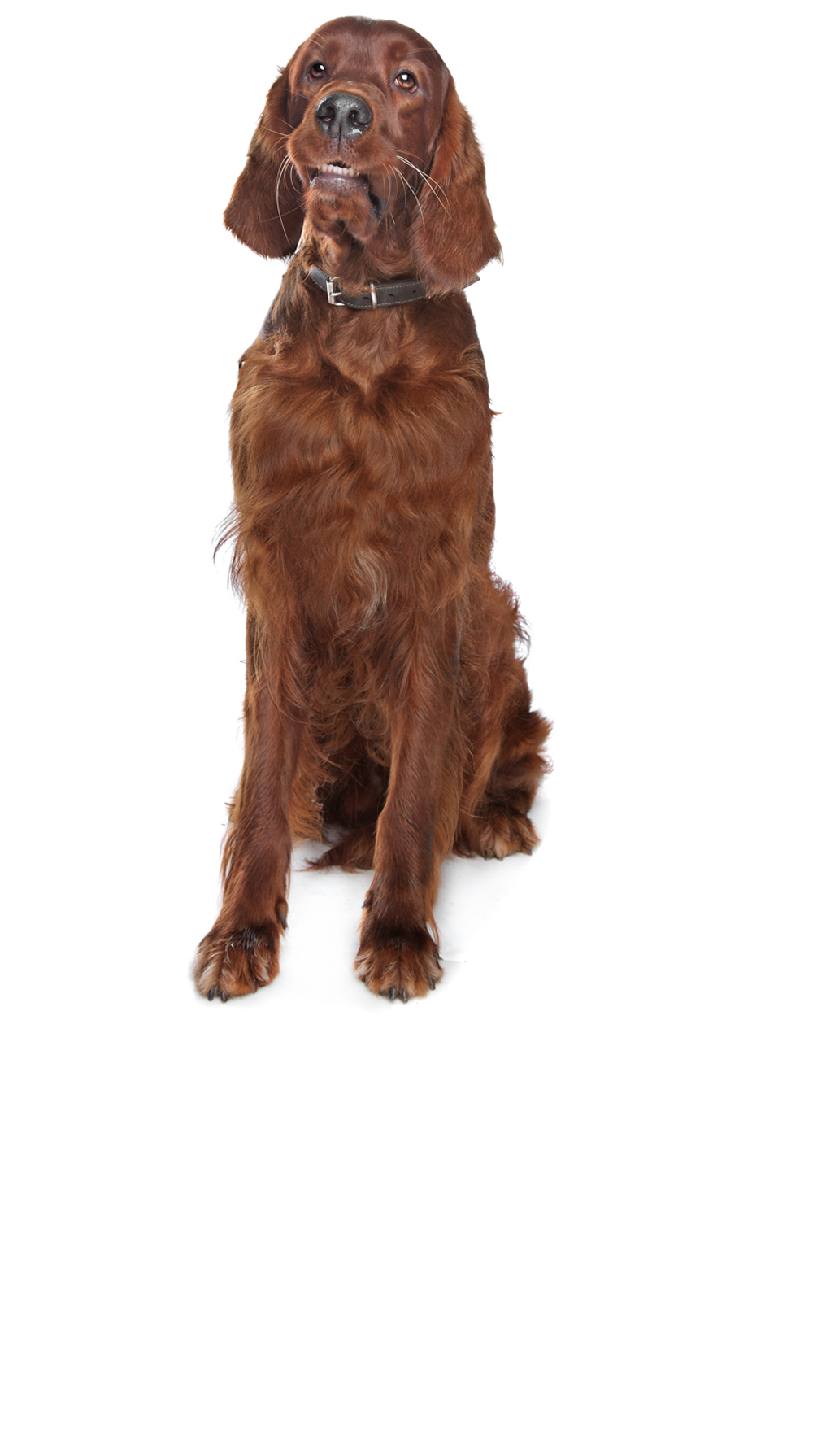 Are you sure the Irish Setter is the best breed for you? Take the Pet Breed Selector Quiz to find your perfect breed match.

If you are still in doubt about owning an Irish Setter, check out our Pet Finder so you can see other suitable dog breed recommendation.

Disclaimer:
The information, including measurements, prices and other estimates, on this page is provided for general reference purposes only.
Irish Doodle
Irish Terrier
Contents
Not the breed you're looking for? Click Here
Latest Stories 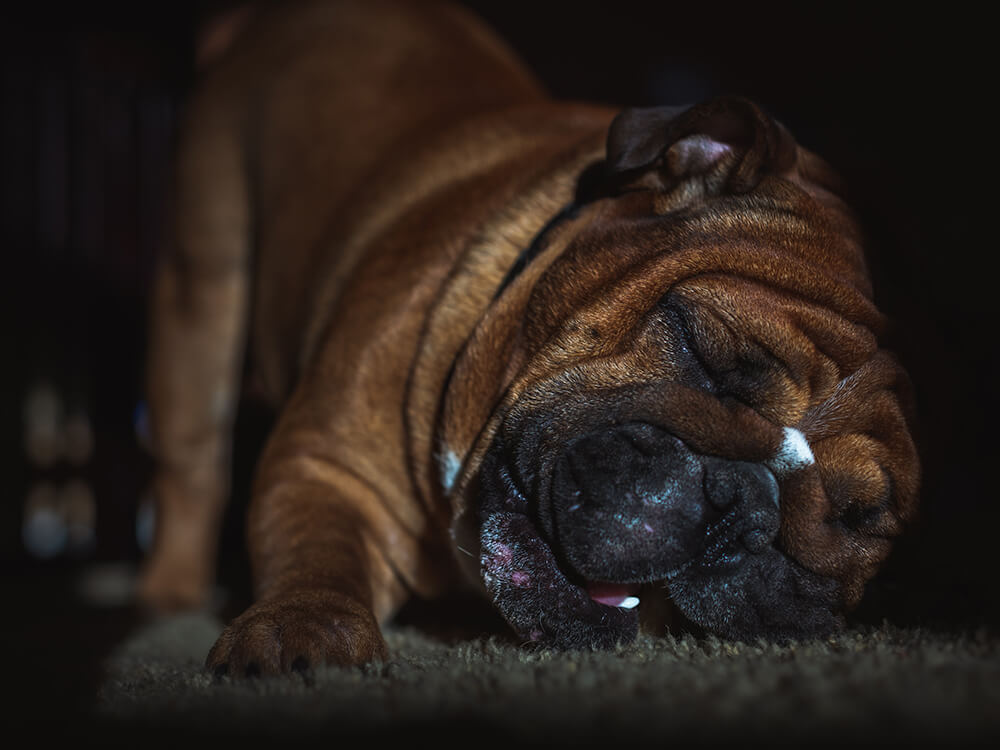 Is your pooch letting one out often? There are several causes behind chronic dog farting, such as abrupt dietary changes and an underlying … END_OF_DOCUMENT_TOKEN_TO_BE_REPLACED 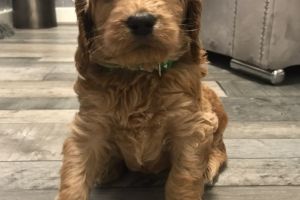