Looking for an Irish Terrier?

The Irish Terrier, as the name suggests, is a dog breed from Ireland and considered to be the oldest terrier breed. Rough in appearance with a courageous heart, the Irish Terrier is an all-around terrier with versatile abilities as a companion, watchdog and vermin hunter. It is a medium-sized daredevil weighing 25 to 27 pounds and standing 46 to 48 centimetres at the withers. This active dog is competitive and excels in agility trial rings.

Are you looking for a versatile, agile and fearless dog breed? Read more about the Irish Terrier, and you might find what you're looking for.

Less is known about the origin of the Irish Terrier, but it is believed to be a descendant of the Black and Tan Terrier dogs of both Britain and Ireland. There also some speculations that the breed has an Irish Wolfhound mixed to its bloodline. Originally bred as a vermin dispatcher, the Irish Terrier has been described by an old Irish writer in 1947 as the "poor man's sentinel, farmer's friend or gentleman's favourite" because of its working qualities as a hunter.

It was in 1875 that the first Irish Terrier was shown to the public and quickly rose to fame 5 years later in 1880, becoming the fourth most sought-after breed in England. The first breed club in Dublin was established in 1879 with the Irish Terriers as the first member of the terrier group. It was also the first terrier recognised as a native Irish breed by the English Kennel Club.

In the late 19th century, Irish Terriers were imported to the US where they became somewhat popular. In 1920's this dog breed has become extremely popular, ranking in the 13th position among all the canine breeds in the US and gracing several show rings across the country. Sadly, the Irish Terrier’s popularity faded and it has become less favoured among the breeders. Today, only a few puppies are bred and registered in The Kennel Club every year.

The Irish Terrier is a medium-sized, well-balanced terrier breed, powerful yet not heavy in form. It has an average weight of 25 to 27 pounds and a height of 46 to 48 centimetres. It has a flat skull, moderately long muzzle, and strong jaws, although its whiskers soften the rugged looks of the dog giving it a bit of character. This dog breed has a black nose, small dark eyes that are adorned with bushy eyebrows, and ears that are V-shaped and fold forward. It has a compact build with straight and long forelegs, deep muscular chests and tail that is docked, appearing shorter than its original length.

The Irish Terrier sports a dense and wiry topcoat, dense enough to cover the skin but not enough to hide its body outline. Under the rough topcoat is a fine and soft undercoat. Its double-layered coat is designed to protect the Irish Terrier from the cold and rough brush on a harsh terrain. The coat comes in a variety of colours such as bright red, red wheaten, golden red, or pale yellow. However, there are some Irish Terriers sporting a patch of white on their chest.

Irish Terriers do not shed much and are often grouped as hypoallergenic dogs. Regardless if it sheds minimally, grooming should not be neglected. Brush the Irish Terrier's coat at least once a week with a natural bristle brush to make sure it is clean and healthy. Also, other grooming regimens must not be overlooked such as cleaning of the ears to avoid wax build-up and infection; brushing of the teeth to keep gum diseases and bad breath at bay; and trimming the nails to avoid cracking and painful overgrowth.

The Irish Terrier is a versatile dog breed with a tough terrier disposition. It is versatile in skills as they can be a loyal and entertaining companion, efficient vermin hunter and an excellent watchdog with its loud barking. Irish Terriers are often referred to as "Daredevils of the dogdom" as they are brave and fearless, never backing down from a fight. They are highly intelligent, independent, strong-willed, curious and assertive, all characteristics that make them difficult to train since have a mind of their own. Irish Terriers need to learn its position in the pack and must look up to you, as the owner, for guidance and direction. With this said, this dog breed is not ideal for first-time dog owners with no experience with stubborn and intelligent breeds.

Irish Terriers have a strong affinity with children, that is short of saying this breed adores them, which makes they are a great playmate. However, no matter how attuned a dog is with children, adults need to supervise all interactions to avoid injury to both dog and the child.

When it comes to other pets, Irish Terriers can coexist with cats if they're raised with them from a young age. However, this dog breed does not get on well with other dogs and pets under the rodent family (e.g. mouse, rats, gerbils, hamsters).Its competitive streak often lands them in trouble with other dogs of the same sex, while its hunting instinct and prey drive may be too strong to control around small animals.

A typical serving for an adult Irish Terrier is 1 to 1.5 cups of premium quality dry dog food daily, equally divided into two meals – morning and afternoon. Each dog has different nutritional requirement that will primarily depend on its size, gender, age, activity level, health and metabolism. To ensure your dog gets the balanced nutrition it deserves, consult a veterinarian for guidance and recommendation.

The Irish Terrier should be provided with high-quality food formulated for medium-sized dogs. Regardless what online reviews say about certain popular dog food brands, the only way to determine the best nutrition for your dog is to go with your veterinarian's advice.

Irish Terriers are generally healthy with an average life expectancy of 13 to 15 years. However, most dog breeds are often afflicted by hereditary health conditions and some acquired disorders. Some health disorders of an Irish Terrier include Hyperkeratosis, Melanoma, Hypothyroidism and Cataracts. Although the Irish Terrier has less potentially dangerous health issues, it pays to be on the lookout for signs and symptoms by making sure you visit a veterinarian for regular check-ups.

Irish Terriers have a penchant for running, hunting, chasing and exploring. With this said, this dog breed has a high activity requirement and must be given adequate amount of exercise. They love the great outdoors and as such will be happy to be provided with at least 60 minutes of daily exercises. As mentioned, Irish Terriers are a competitive breed and will excel in any agility trials. As a hunting dog, it will likely escape if given a chance, so make sure it is well within the confines of a spacious back garden with secure fences.

Irish Terrier puppies are not common in the UK and it is likely that you will go on a waiting list if you want one. Purchasing a well-bred Irish Terrier puppy may cost you a minimum of £500. To ensure it stays healthy at whatever age you need to feed it high-quality food, which can set you back £30-£40 a month. You also need to factor in the initial cost for dog accessories and equipment such as food bowls, leads, collars, and beds, which will likely be about £200 depending on the brand.

When it comes to healthcare, you need to be prepared in case your dog suddenly falls ill or gets into an accident. You can offset some medical bills if you get a pet insurance, which can range from £20 for a time-limited cover up to £43 for a lifetime one. These prices vary depending on your dog’s health and age, size and weight, the type of cover you choose, and whether it has pre-existing conditions.

Other outgoings to consider are veterinary expenses that may not be included in a pet insurance coverage such as vaccinations, routine checks, neutering or spaying, and annual boosters, which can have a combined cost of £1000 annually. Roughly, you will be setting aside £60-£90 a month for recurring expenses, depending on the type of insurance cover you choose. This estimate is also exclusive of walking or grooming services that you might want to use at times. 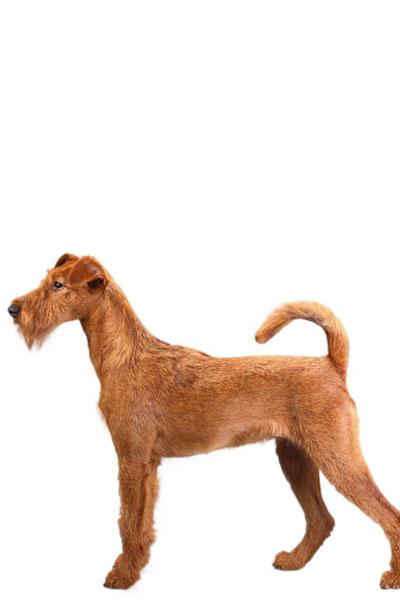 Are you sure the Irish Terrier is the best breed for you? Take the Pet Breed Selector Quiz to find your perfect breed match.

Can you keep up with spunky and fearless dog like the Irish Terrier? If you're looking for a more subdued dog breed, find other dog breed options via our Pet Finder.

A picture of dog licking paws is nothing unusual for dog owners, but when do we consider this behaviour as part of grooming? When do we say that it is … END_OF_DOCUMENT_TOKEN_TO_BE_REPLACED

Not the breed you're looking for? Click Here
Latest Stories

A picture of dog licking paws is nothing unusual for dog owners, but when do we consider this behaviour as part of grooming? When do we say that it is … END_OF_DOCUMENT_TOKEN_TO_BE_REPLACED