Thinking of buying or adopting a Japanese Spitz?

Do you see a resemblance between the Japanese Spitz and the Samoyed? It is actually believed that the former is the descendant of the latter, which was bred in Japan to be really small. It is an alert, brave and affectionate breed to its family and wary of strangers. It is not aggressive toward people it does not know and would rather keep its distance until it gets to know them. It is an ideal dog for first-time owners, families with children and the elderly.

Has the Japanese Spitz caught your attention? Here is a brief background of this white and fluffy dog.

The history of the Japanese Spitz is a mystery with varying stories surrounding its origin. One theory states that when the Samoyed arrived in Japan, it was bred to become a very small breed, which turned out to be the Japanese Spitz we see today. Another belief is that it came from white German Spitz dogs from China that were crossed with different Spitz-type dogs imported to Japan. The final breed standard for the Japanese Spitz was completed after the Second World War.

It has become a popular breed all over the world in households as companion dogs as well as favourites at dog shows. It is recognised by major international dog registries, including The Kennel Club under the Utility group.

The Japanese Spitz is a little white ball of fur that weighs 11 to 20 pounds and stands 30 to 38 centimetres at the withers. It has a medium-sized head, which is wedge-shaped when viewed from above, as well as a slightly domed skull. It has dark oval-shaped eyes, round black nose, triangular ears, a well-defined stop, nicely proportioned muzzles, and a strong jaw with a perfect scissor bite.

The Japanese Spitz sports a thick double coat that protects it from harsh weather conditions. It has a straight outer coat that stands off its body, and a short yet profuse, dense and soft undercoat. The only accepted colour according to KC standards is pure white. Hair is short on the face, ears, front of its fore and hind legs, as well as below its hocks. The rest of the body is covered with longer hair with mane on its neck and shoulders. Its well-plumbed tail is profusely covered with long hair.

Because of its thick and long coat, the Japanese Spitz has demanding grooming needs. It can benefit from numerous visits to the groomer’s in a year to keep its coat tidy and manageable at home. While some owners take care of their Japanese Spitz’s coat on their own, it can be tedious and time consuming. In fact, a weekly grooming programme is needed, which involves more brushing in the spring and autumn when the breed sheds more.

To complete its grooming routine, attention must be given to other parts of the body like its ears to ensure that there is no wax build-up. Nails should also be trimmed regularly to prevent uncomfortable overgrowth or cracking. Lastly, brush its teeth regularly to lessen the odds of tooth and gum disease, which is common to small breeds.

The Japanese Spitz is an alert, playful, and bold dog. It is affectionate towards family and would want nothing more than to be part of everything that goes around the house. It builds a strong bond with family members but tends to be chary toward people it doesn’t know. However, it rarely shows aggressiveness and would rather keep its distance. It is hypersensitive and will easily let its owners know through barking when it senses the presence of strangers, making it a good watchdog.

Because of the Japanese Spitz’s warmth and devotion to its family, it is a great companion for first-time owners, the elderly and families with children of all ages. When it comes to kids, it has an affinity with them and would happily play games with them but parents need to keep an eye on interactions especially when there are guests. The Japanese Spitz can be overprotective of its little humans. It usually gets on well with other pets in the household when socialised early but will chase small animals it does not know.

The Japanese Spitz is an intelligent and a people-pleasing breed, making training generally easy. Owners need to be consistent and fair when it comes to correction so it can grow to be adaptable and obedient, keeping in mind that it is sensitive so harsh correction won’t help. It actually enjoys alone time with its master especially when training is filled with positive reinforcements.

A typical serving for an adult Japanese Spitz is 1/2 to 1 cup of excellent quality dry dog food per day. It is worth remembering that the amount of food and frequency of feeding highly depend on its age, size, build, activity level, and metabolism. It is always a good idea to ask your veterinarian for recommendations.

The nutritional needs of small breeds are different from large ones so it is important that the food you provide be specifically formulated for its size. Should you wish to feed your Japanese Spitz home-prepared food, always choose fresh ingredients and provide supplementation to avoid nutrient deficiencies. Omega 3 and 6 fatty acids are very important for coat health.

The Japanese Spitz is a generally healthy dog that can have an average lifespan of 12 to 15 years. It can be prone to a few hereditary health conditions such as skin allergies, runny eyes and Patellar Luxation.

The lively Japanese Spitz need at least 30 minutes of exercise per day. It loves going for a short walk and playing canine sports like flyball and agility. In addition, it must have access to fenced yard so it can let off steam whenever it needs to.

If you want to purchase a well-bred Japanese Spitz pedigree puppy, prepare to pay no less than £200. Other than the initial purchase, you also need to consider getting a pet insurance, which can cost anywhere from £20 a month for a basic cover up to £40 a month for a lifetime cover.

Food cost is another matter since you need to ensure that your dog stays healthy and well-fed at whatever age. To buy high-quality dog food, you will have to spend around £20–£30 a month. You also need to factor in the initial cost for dog accessories and equipment such as bowls, leads, collars, and beds, which will likely be about £200 depending on the brand.

Other outgoings to consider are veterinary expenses that may not be included in a pet insurance coverage such as vaccinations, routine checks, neutering or spaying, and annual boosters, which can have a combined cost of £600 annually. On average, caring for a Japanese Spitz will cost about £50–£80 a month, depending on the type of insurance. This is exclusive of walking or grooming services that you might want to use at times.

Are you sure the Japanese Spitz is the best breed for you? Take the Pet Breed Selector Quiz to find your perfect breed match.

Is the Japanese Spitz too challenging for you? Take our Pet Finder so we can help you find more manageable dog breeds.

Disclaimer:
The information, including measurements, prices and other estimates, on this page is provided for general reference purposes only.
Japanese Chin
Japanese Tosa
Contents
Not the breed you're looking for? Click Here
Latest Stories

Australian Shepherds were bred to be herding dogs that can withstand cold climates. They sport dense and thick double coats that provide them warmth … END_OF_DOCUMENT_TOKEN_TO_BE_REPLACED 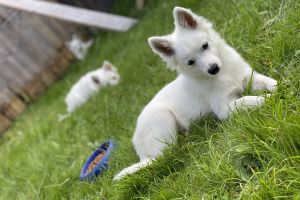 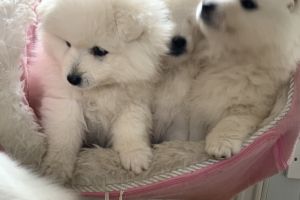