Searching for a Korean Jindo?

An independent mid-sized hunter, the Korean Jindo is valued for his skills in tracking and bringing down prey. His intelligence, perceptiveness, and strong loyalty towards his master are some of the most notable traits that earned him countless admirers from around the globe. The breed is officially recognised by the Kennel Club.

The true origins of the Korean Jindo remain unclear as there are no written records about it. There is no evidence that the breed was created in the Jindo province. Though, the majority of experts believe that the dog has been on the island for at least 1,500 years.

The most popular theory shares that the breed is a descendant of the dogs native to Korea and the dogs brought by the Mongols who invaded the country during 1270 A.D. The Korean king surrendered during the invasion; however, a few of his armies persisted to fight on Jindo Island, which is located in the southern coast of the country. Some dogs tagged along with their masters to the island, where they became isolated. This is where a pure strain of the Korean Jindo was developed.

The breed's major purpose is to chase and capture badgers, boars, deers, and rabbits. He can hunt well in groups and even on his own. It is in the Korean Jindo's nature to go back to his master and lead them back to the prey that he has taken down. His remarkable intelligence, attentiveness, boldness, and extreme dedication for his work and master were greatly appreciated by Koreans. These traits made the Korean Jindo one of the most popular breeds in the country.

A heart-warming tale about a Korean Jindo named Baekgu embodies the breed’s resolute devotion for his owner. In 1991, Baekgu was sold by his owner and transported over 187 miles away from home. After seven months, to the master’s surprise, the dog returned on his doorstep, weak and at the brink of death. A documentary, a storybook, and cartoons about this heart-warming tale were created in honour of Baekgu.

In 1962, the Korean Jindo was appointed as Korea’s fifty-third national treasure. Since the country's law protected the breed as a national monument, it is difficult to export one outside Korea. In 2002, the first Korean Jindo was imported to the UK. In a 2015 statistics made by the Kennel Club, there are approximately 215 Korean Jindos registered with the KC.

The Korean Jindo is a medium-sized dog breed with a well-proportioned, equilateral body. His length and height at the withers are about equal to each other. There are three types of Korean Jindo based on their body shape:

Generally, the Korean Jindo has a broad skull and wedge-shaped head. His furry ears are triangular, raised upright, and slightly leans forward. His thick tail is curled in the form of a sickle. His hind legs are sturdy and powerful with cat-like feet that have tough, round, and well-furred pads.

The breed has almond-shaped eyes that come in various shades of brown. Some dogs may have light brown eyes, but these are not favoured by fanciers. Most of the dogs have pointed muzzles that are black, except for white Jindos, which can have different shades of tan and pink on their noses.

The Korean Jindo sports a short, thick double coat. The topcoat is sleek and smooth, whilst the undercoat is soft and dense. The coat comes in colours of fawn, grey, red, white, yellow, brindle, and black and white.

The breed requires fairly low-maintenance. The coat needs brushing once or twice a week with a pin or slicker brush. However, he may require it more often once his shedding period starts.

The Korean Jindo has a wash-and-wear coat, and he grooms himself much like a cat. He also has a strange aversion to water, thus it is best to bathe him sparingly. Only do it when he gets too smelly or grimy.

Keep his nails trimmed regularly to prevent it from excessively growing, which can lead to cracking or splitting. Regular checking and cleaning of his ears is a must to avoid dirt build-up that can cause ear infections. Daily toothbrushing should be a part of his grooming routine, not only to curb doggy breath but also periodontal diseases.

The Korean Jindo is very affectionate and loving to his family companions and fiercely protective of them as well. It is the breed’s strong loyalty for his owner that endeared to the people. With that said, he may readily accept a new human companion; however, he will still be greatly attached to his first owner who took care of him.

Children and other pets can make a best friend out of the Korean Jindo. Just make sure that the dog is socialised at an early age to curb his high prey drive and aggression towards dogs of the same sex.

Due to the breed’s deep devotion to his family, it is common for him to be aloof and reserved when meeting new faces. However, he won't be aggressive nor fearful towards them without reason. His perceptiveness and protective nature make him a great watchdog.

Again, ensure that he has been well-socialised during his puppyhood. It will help hone him into an effective guard dog as he will be able to correctly discern who is a threat and who is not.

The Korean Jindo is a social dog and he may easily get lonely and bored if left alone for a long time. He may look for other ways to entertain himself, which can lead to the development of destructive behaviour. Thus, be sure to make time to shower him with love and attention. Training will also help in lessening unwanted behaviour.

A highly intelligent dog, the Korean Jindo is quick to learn new tricks and commands when training. However, although he is smart and eager to please his master, he can be quite stubborn. He would attempt to do things his way, so your calmness and patience are needed during training sessions.

The Korean Jindo requires firm yet gentle handling and consistency like most independent breeds. Be sure to set the rules and adhere to them. Once you have gained his respect, it will be easier for you to train him.

Since the Korean Jindo is more active than most dog breeds, he needs a diet that has extra proteins, carbohydrates, and fats. The Korean Jindo will do well with a high-protein, grain-free dog food. Avoid dog food that is made with corn, as the Korean Jindo’s digestive system isn’t used to heavy starches. Dog food that has chicken and fish as main ingredients contain high-quality fats that have omega-6 and omega-3 fatty acids. These fats will also keep your Jindo’s coat healthy and shiny.

Other foods that are good for a Korean Jindo include cottage cheese, which is high in calcium and protein; eggs, which are a good source of protein; fruits and vegetables such as apples, carrots, and green beans, which have vitamins and minerals that typical dog food may lack.

A Korean Jindo puppy aged three to six months needs three meals a day. Between the age of six months and one year, change the feeding to twice a day. When the dog reaches adulthood, give him 2.25 to 2.75 cups of food divided into two meals daily.

Note that the majority of Korean Jindos are light eaters and tend to be picky with their food. It is thought to be caused by their lifestyle during historic times. When the Korean Jindos were still commonly used as hunting dogs with strong hunting abilities, they used to travel miles and miles a day and only fill their stomachs when necessary. If your dog is a picky eater, you can entice him to eat by heating up his food.

Being a hunting dog, the Korean Jindo is very active with tons of energy to burn. Insufficient exercise and mental stimulation will cause this high energy dog to develop destructive behaviours, such as destroying the furniture and jumping out of the fence.

Walk him for at least thirty minutes to an hour daily. Be sure that he is on a lead during your walks since Korean Jindo’s high prey drive might lead him to chase anything that moves.

Games like fetch, Frisbee, and obstacle course are good options to tire him out more. Swimming should be crossed out of the list unless he isn't averse to water, which isn’t typical of most Korean Jindos. Once his need for adrenaline is sated, he will be calm and content just being with his family.

The Korean Jindo is a hardy breed that can live about twelve to fifteen years. Whilst they only have sparse serious health problems, there are a few diseases that you should be wary of, such as:

The cost of a well-bred Korean Jindo puppy is approximately £630 to £780 depending on the breed’s quality. To ensure it stays healthy at whatever age, be ready to spend £30-£40 a month on high-quality dog food. You also need to factor in the initial cost for dog accessories and equipment such as food bowls, leads, collars, and beds, which will likely be about £200 depending on the brand.

When it comes to healthcare, you need to be prepared in case your dog suddenly falls ill or gets into an accident. There is no pet insurance available for Korean Jindo dogs in the UK for now due to some government restrictions.

Other outgoings to consider are veterinary expenses that may not be included in a pet insurance coverage such as vaccinations, routine checks, neutering or spaying, and annual boosters, which can have a combined cost of £1000 annually. Roughly, you will be setting aside £55-£80 a month for recurring expenses, depending on the type of insurance cover you choose. This estimate is also exclusive of walking or grooming services that you might want to use at times. 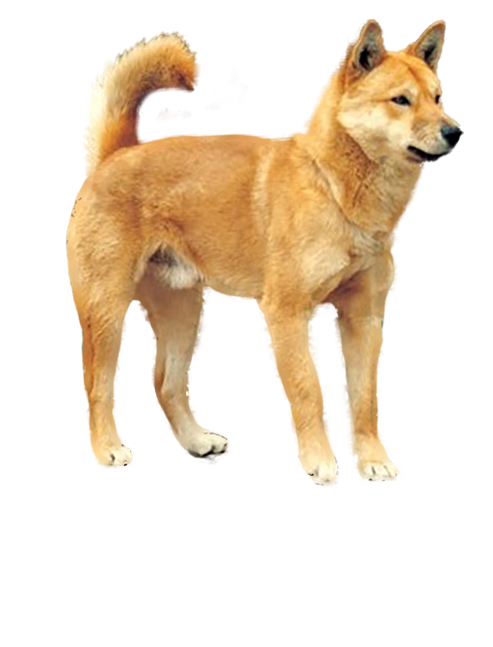 Are you sure the Korean Jindo is the best breed for you? Take the Pet Breed Selector Quiz to find your perfect breed match.

Dog Breed Selector Quiz
Disclaimer:
The information, including measurements, prices and other estimates, on this page is provided for general reference purposes only.
Kooikerhondje
Korthals Griffon
Contents
Not the breed you're looking for? Click Here
Latest Stories