Looking for a Lhasa Apso?

The Lhasa Apso originated in the Himalayan Mountains in Tibet. The name "Lhasa" refers to the capital of Tibet while the term "Apso" means goat-like due to its long coarse coat resembling Tibetan goats. Lhasa Apso was originally bred as a guard dog in monasteries. This dog breed is affectionate, fun-loving and considered to be an excellent companion. It is a popular dog breed owing to its charming and adorable look.

Are you looking for a handsome guard dog that is not necessarily massive in size? Check out this brief background of Lhasa Apso.

The Lhasa Apso is of a Tibetan origin and takes the name of the holy city of Tibet, Lhasa. Its name is derived from Lhasa city and "apso" which means goat-like. Its primary function is to guard the homes of Tibetan nobility and Buddhist monasteries near the sacred city of Lhasa. Although Tibetan Mastiffs were utilised to guard the entrances, the Lhasa Apso serves as the burglar alarm when intruders get past the Tibetan Mastiffs.

It is believed that the Lhasa Apso is among the oldest recognised dog breeds in the world, dating as far back as 800 BC. In fact, it is also believed that Lamas (spiritual masters or high priests) can enter into the bodies of Lhasas. The Lhasa Apso is highly treasured that the only way to own one is to receive it as a gift to bring "good fortune and prosperity" to the receiver.

In 1933, a pair of Lhasas was given as a gift to C. Suydam Cutting who travelled to Tibet and met Thubten Gyatso, 13th Dalai Lama. Also at this period, one Lhasa Apso was already registered in England. It was in 1901 that Sir Lionel Jacob described and named the Lhasa as "Lhasa Terrier." It was only changed back to Lhasa Apso when the formal Lhasa Apso Club was founded in 1970. It was first recognised by the Kennel Club in 1908.

Lhasa Apsos are small and sturdy, sporting heavy, lush coats that cover their entire body, long enough to almost reach the floor. They wear a beard, and a moustache and a patch of hair hang over the head, falling over their eyes but must not impede their vision. They have brown eyes, black nose and small pendant ears. In form, Lhasas must be longer than they are tall standing 23 to 28 centimetres and weighing 12 to 15 pounds. Lhasa Apso's tail is heavily feathered that it carries over its back.

When it comes to its coat, the Lhasa wears a heavy, straight, and very dense coat that comes in a variety of colours including black, red, white, and gold with several shadings. Although its lush coat is a beauty to behold, gorgeous in fact, grooming is a bit of a challenge. Grooming a Lhasa's coat is time-consuming and difficult. Unlike most breeds, the Lhasa will require daily brushing as well as bathing every two to four weeks. Most often, owners hire professional groomers to make sure the beauty of their coats is maintained.

Naturally, other grooming regimens must be included if you want to keep an overall healthy dog. Make sure to check the ears regularly for any signs of irritation or infection. Also, clean the ears to prevent wax build-up using a cotton ball and a vet-approved solution. Teeth should also be thoroughly brushed on a weekly basis to prevent tartar build-up and avoid gum disease. Nails should also be trimmed especially when it grows too long. You will know when you hear clicking sounds.

Always remember that the Lhasa Apso was originally bred as a guard dog and a companion dog, so it is naturally wary and aloof around strangers. However, it is very affectionate and sociable to people it knows and trusts, especially its family. Its bark alarm in a quiet neighbourhood may become a bother, so make sure that the Lhasa is socialised and trained well when young to curb excessive barking. Lhasas have a huge personality, despite its small size they see themselves as big dogs, often fearless and bossy, demanding attention.

Training-wise, the Lhasa Apso's intelligent but stubborn nature can make it hard to train. It is often happier when it can do its own thing and is known to turn a deaf ear to commands, depending on its mood. If is not put in its proper place, the Lhasa can quickly show a more dominant nature. In other words, this dog breed is not well-suited for first-time dog owners.

The Lhasa Apso is not good around dogs, when not properly socialised. It is often snippy with a suspicious and dominant nature. However, since it has a low prey drive, mixing small animals with a Lhasa does not necessarily end in disastrous results. It can co-exist with other animals given the right training. When it comes to children, it is better suited to households with older children who know how to handle this dog. Lhasas don't take kindly to rough play where they can be pushed around or mishandled. Supervision is a must during play.

A typical serving of an adult Lhasa Apso is 3/4 to 1 cup of high-quality dog food daily. Keep in mind that not all dogs will require the same type or amount of food. Nutritional needs of each dog are determined mainly through its age, size, gender, build, metabolism, and activity requirement. If you're not sure what your Lhasa deserve, consult a trusted veterinarian for advice.

The Lhasa Apso is a small breed that requires a more calorie-dense dog food. Most small dogs prefer small pieces of kibble as well, but it is important to feed it with grain free dog food to avoid common allergens such as wheat and corn.

The Lhasa Apso is a normally healthy and robust dog. When well cared for and properly fed, it can live up to 15 years or more. Just like any dog, the Lhasa is also predisposed to genetic and acquired health conditions that may include Cherry Eye, Patellar Luxation, Sebaceous Adenitis, Keratoconjunctivitis Sicca, Progressive Retinal Atrophy, Familial Inherited Renal Dysplasia, and some skin allergies.

Lhasas are not highly active and are content to stay indoors. Unlike other breeds, the Lhasa Apso does not require rigorous activities, but like most dogs, they enjoy short 20-minute walks and enjoyable play sessions. They are well suited with people who lead sedentary lifestyles.

If you are set on getting a Lhasa Apso, be ready to spend anything between £250 and £750 for a well-bred pedigree puppy. To ensure it stays healthy at whatever age, you will need to feed your dog high quality dog food and treats, which can set you back £30-£40 a month. You would also need to spend on dog accessories such as leads, collars, bowls, crates, beds, and toys. The combined initial cost for these things is estimated at £200.

Moreover, you need to consider paying for pet insurance to offset veterinary bills in case your dog suddenly falls ill or gets into an accident. Depending on where you live and your dog’s health and age, a time-limited cover can cost £18 a month while a lifetime one can cost up to £40 a month. Generally, insurance companies do not cover routine veterinary consultations, initial vaccinations, boosters, and neutering or spaying, so you may also have to spend an additional £1000 annually for these services.

On average, the minimum cost to care for a Lhasa Apso is £60-£90 per month depending on your pet insurance premium. This estimate does not include the rates for other services such as walking and grooming. 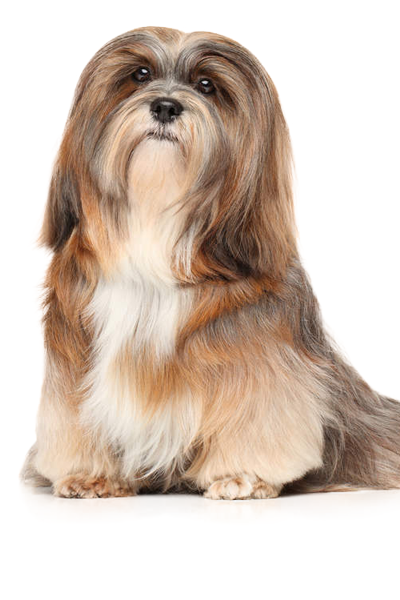 Are you sure the Lhasa Apso is the best breed for you? Take the Pet Breed Selector Quiz to find your perfect breed match.

Can you handle a high-maintenance dog like the Lhasa apso? If you don't think it's the right breed for you, check out our Pet Finder for more choices.

A picture of dog licking paws is nothing unusual for dog owners, but when do we consider this behaviour as part of grooming? When do we say that it is … END_OF_DOCUMENT_TOKEN_TO_BE_REPLACED 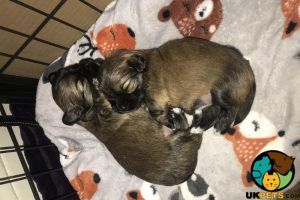 A picture of dog licking paws is nothing unusual for dog owners, but when do we consider this behaviour as part of grooming? When do we say that it is … END_OF_DOCUMENT_TOKEN_TO_BE_REPLACED