Searching for a Maltipoo?

The Maltipoo is a designer dog that was bred by crossing a Toy Poodle or a Miniature Poodle with a Maltese. The breed's alternate names are Moodle, Maltese Poodle, Malti-Poodle, and Malt-Poodle. Since this small dog is a mixed breed, he inherited the appearance and traits of both of his parents.

The Maltipoo is one of the most popular designer dogs known for his affectionate and outgoing nature. He is easy to train as he loves pleasing his pet parents.

Are you planning to bring home a Maltipoo puppy? Here is a brief background of this charming hybrid dog.

What is a Maltipoo?

The Maltipoo is a recently developed hybrid dog that was created as a companion for people with pet-related allergies. He is a cross between the Maltese and either the Toy or Miniature Poodle, which are both low-shedding dog breeds. There is also a Teacup Maltipoo type, a smaller version of the Maltipoo, weighing only 2–5 kilos.

Let's know more about the Maltipoo by looking into the history of his parent breeds.

One-half of this mixed breed’s parents, the Maltese, is a small dog that is greatly favoured by royalty. His origins are said to have started in the small island of Malta, which can be found in the south of Sicily, Italy.

The breed has a playful and people-loving personality, so countless dog lovers were quick to fall in love with him.

The Maltipoo's other parents, the Toy or Miniature Poodle, were produced from their larger counterpart, the Standard Poodle. The breed was first created in Germany as a water retrieving dog. Soon, other European countries, including France and Spain, welcomed these skilled dogs. The Poodle is known for his high intelligence, trainability, and alertness.

Maltipoos are a mix of the sweet-natured personality of the Maltese and the smartness and curiosity of the Poodle. These traits allow them to be adept therapy dogs.

The Maltipoo dog breed is yet to be recognised as a true breed by any major kennel club. However, fans and enthusiasts in North America have established the Maltipoo Club and Registry to make sure that breeders produce only healthy generations of Maltipoos.

Several Maltipoo owners are as famous as the breed. One is Blake Lively, who owns a Maltipoo named Penny. Another is Ashley Tisdale has two beloved Maltipoo dogs called Blondie and Maui. Michelle Kwan is also an owner of two Maltipoos named Tofu and Ginseng.

The Maltipoo dog breed is small in size. He weighs 3–9 kilos and stands 20–36 centimetres at the withers, depending on which parent breed he takes after.

Generally, Maltipoo puppies are birthed in a litter of 3–7. Once they are 8 weeks old, they are ready to go to their new homes. They become fully grown when they turn one year of age.

The Maltipoo, being a mixed-breed dog, will inherit the physical features of his parent breeds, the Maltese and the Miniature Poodle. However, his body structure will resemble that of the Maltese than the Poodle.

The head of this designer dog should not look too small nor large with the rest of the body. This mixed breed has a short muzzle with a dark nose and dark-coloured, tight lips. His eyes are dark and round, whilst his ears are set high and wide apart.

The Maltipoo coat's length and texture vary depending on his parent breeds. He may sport a soft, wavy coat with a nice curl or a scruffy, harsh coat. The coat may differ in colours, which include cream, white, apricot, silver, brown, café au lait, black, silver beige, grey, red, blue, and phantom.

The Maltipoo dog breed's coat is low-shedding, which is the reason why he was developed in the first place. This small mixed breed was designed for people with pet allergies who may want to have a dog.

However, the Maltipoo still requires a good deal of grooming despite his low-shedding coat. He will need daily brushing to remove matts and tangles. Maltipoo dogs that inherited the curlier coats of the Poodles need professional grooming every 4–6 weeks.

This designer dog breed will only need to be bathed once every 3 weeks. Bathing him too often can dry his coat and skin, leading to skin problems. He also needs his coat trimmed, similar to other Poodle mixes. This can be done once or twice a year.

However, the hair surrounding the breed's face and his head is another matter. These areas must be clipped once a month to prevent these from covering and irritating your puppy's eyes.

The Maltipoo breed, just like all dogs, has other basic grooming needs aside from keeping his coat in tip-top shape. You will need to clean his ears to prevent wax build-up and trim his nails to avoid overgrowth. Periodontal disease is very common in small dog breeds. Thus, tooth brushing should be a daily habit.

The Maltipoo breed's coat is hypoallergenic, although many will argue that there is no such thing as a 100% hypoallergenic dog. All dogs produce dander, but hypoallergenic breeds have lower amounts of this allergen. Thus, the breed is the best choice for dog owners with allergies.

However, this does not guarantee that you're completely safe from allergic reactions. Cleaning and dusting your home regularly will prevent the accumulation of dander. Washing your dog's bed, blankets, and toys is also an effective method to wash the dander away.

Restricting your dog from entering some rooms in your house and giving him access to some specific rooms will also lower the chances of triggering allergies.

Is a Maltipoo a good family dog?

The Maltipoo dog breed is loyal and affectionate, which makes him a wonderful family dog. Because he is incredibly people-oriented, he tends to suffer from separation anxiety, which may result in destructive behaviours.

A Maltipoo puppy's temperament will depend on his parentage. Generally, this mixed breed is known to have an amazing and outgoing personality. His inherent sociable personality makes him a friendly dog towards strangers.

However, Maltipoos are alert companion dogs that will not hesitate to ward off intruders. Despite their small size, they do not back down when they sense a threat.

Maltipoos, being Poodle mixes, are intelligent and fast learners. Thus, they are a good choice for first-time owners. However, beware as they are also quick to pick up bad habits, and as such, they must be trained consistently.

Do not let your Maltipoo develop the 'small dog syndrome,' wherein he may acquire unruly and wilful behaviours because his owners let him get away with it.

In training this designer dog breed, always use positive reinforcement and rewards-based training over punishment and rough training methods. It will encourage your Maltipoo puppy to focus and will help build his trust in you.

The breed is good with older children. He tends to be snappy with younger children or toddlers, especially when playtime becomes boisterous or noisy. With this said, it is important to make sure that both the dog and the children are well-supervised to keep playtime calm and safe.

Maltipoos can get along well with other dogs and family cats they grew up with, as long as they are socialised early or at a young age. However, these small dogs will not hesitate to chase off any other cats or smaller animals that they may come across in the neighbourhood, so care should be taken.

Yes, the Maltipoo likes the sound of his voice and can be quite vocal, which is a trait that he inherited from the Maltese. Although he is not a natural watchdog, he is quick to bark to let owners know when there are strangers around.

His barking may also mean discontentment. Always make sure that your Maltipoo puppy's daily needs are met. If his yapping becomes a nuisance, curb it through consistent training.

Feed a full-grown Maltipoo approximately 5/8–1 1/2 cups of high-quality dry dog food per day. Feeding your dog a proper diet with the right amount is crucial to keep him healthy.

However, a Maltipoo's diet needs will depend on his age, size, activity level, build, and metabolism. Consult a veterinarian that you can work with to determine the most suitable diet for your Maltipoo dog.

Provide your dog with balanced nutrition using ingredients that are rich in animal protein. There are tons of commercial dog food available in the market, so make sure that you buy premium-quality dog food that is formulated for small dogs.

Since small dogs tend to overeat, measure and divide your Maltipoo's food into 2–3 meals, so he will not become overweight.

Do Maltipoos have health problems?

The Maltipoo dog breed normally has a 12–15-year lifespan. This hybrid dog is generally healthy with high energy.

However, like all dogs, this designer breed is also predisposed to certain genetic health issues that he inherited from either of his parent breeds, like Legg-Calve-Perthes disease which is common in small breeds. These health problems include:

Small dog breeds are predisposed to this condition. A Maltipoo that has patellar luxation will suffer due to the displacement of the kneecaps.

This is a painful orthopaedic problem that needs immediate treatment, as it can trigger arthritis. To treat patellar luxation and prevent eventual lameness, surgery will need to be performed.

PSS in the Maltipoo is a hereditary disorder that is caused by an abnormal blood vessel. This condition allows blood that carries toxins to pass through the liver. As a result, the organ gradually deteriorates. PSS symptoms include seizures, stunted growth, and disorientation.

An affected dog will only need diet changes and medications to treat this condition. However, if these options fail, the next option would be surgery.

The Maltipoo can be afflicted with PRA, which is an incurable eye disorder that causes the retina to degenerate. Over time, affected dogs will permanently lose their vision. Dog owners will need to know how to keep their homes safe for their blind dogs.

A blind Maltipoo needs to move through your home without problems, so as much as possible, avoid rearranging the furniture. Risky areas in the house such as stairs and pools should be barricaded or inaccessible to prevent accidents.

When buying a Maltipoo puppy, look for reputable breeders whose breeding dogs are health-screened. This will ensure that the parents of the litter have low chances of developing these diseases.

The Maltipoo breed is moderately active, so he does not require lots of time for daily exercise and mental stimulation. He only needs 20–30 minutes of walks and playtime.

Take your dog out for a short walk or let him romp around in the backyard. He will also enjoy playing and chasing a ball across the floor for hours. If your dog does not get enough exercise, he can get bored and may become destructive.

How much is a Maltipoo?

A well-bred Maltipoo puppy from a reputable breeder will cost £1,000–£2,500. He will need high-quality dog food, which will cost you £20–£30 a month. Pet essentials like food bowls, lead, collar, and bed for your Maltipoo will approximately cost £200.

Your dog will also need pet insurance, which can range from £25 a month for a time-limited cover and £45 a month for a lifelong cover. Veterinary expenses such as vaccinations and routine checks will cost £320–£430 annually.

Roughly, you will be setting aside £50–£80 a month for recurring expenses, depending on the type of insurance cover you chose. This estimate is exclusive of walking or grooming, which might be required at times. 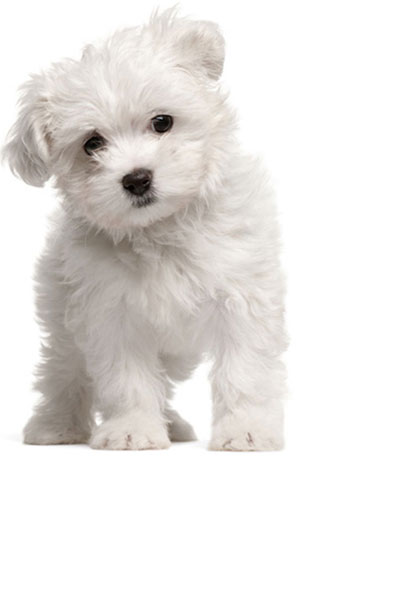 Are you sure the Maltipoo is the best breed for you? Take the Pet Breed Selector Quiz to find your perfect breed match.

Still not unsure about the Maltipoo? Check out the Pet Finder for more suggested breeds that are suitable to your lifestyle and personality.

Disclaimer:
The information, including measurements, prices and other estimates, on this page is provided for general reference purposes only.
Maltese
Manchester Terrier
Contents
Not the breed you're looking for? Click Here
Latest Stories 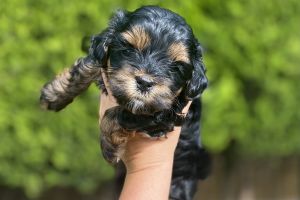