Thinking of buying or adopting a Norwich Terrier?

The Norwich Terrier is a small terrier dog originating in the United Kingdom. It weighs 11 to 12 pounds and stands 24 to 25 centimetres at the withers. Despite its size, this type of dog is an ideal watchdog. It is intelligent, outgoing and has high barking tendencies. It is a close cousin to the Norfolk Terrier, which is its drop-eared variety.

Are you planning to own a delightful terrier? Learn more about the Norwich Terrier to determine if you've found a suitable companion dog for your family.

The Norwich Terrier originated in the 19th century East Anglia, England where they were used to work as ratters in stable yards and bolters on fox hunts. These working terriers also served as mascots of Cambridge students as Cantab Terriers.

It is believed that the Norwich Terrier descended from Irish Terriers, small red terriers, which existed in the area way back in the 1860s. Others speculate that the Border Terrier and the Cairn Terrier were among its ancestors. Either way, the Norwich Terrier was developed by Frank Jones by crossing different working terriers to produce smaller dogs, able to dig into small burrows.

Norwich Terriers have become a popular choice as companion dogs for families, but over recent years, its numbers have declined as such that the breed has been placed under the vulnerable native breed list of The Kennel Club.

The Norwich Terrier is a small, sturdy dog with an average weight of 11 to 12 pounds. Its body can be described as slightly longer than it is tall, standing 24 to 25 centimetres. It looks very similar to the Norfolk Terrier with the difference being that the Norwich Terrier has pricked ears. The Norwich Terrier has a slightly dome-shaped head, wedge-shaped muzzle and well-defined stop. The eyes are small, oval-shaped and dark in colour showing a bright and curious expression. Norwich Terriers have strong and muscular back legs and powerful front legs that are quite short. They carry their tails straight.

Norwich Terriers boast of a harsh and wiry topcoat that lies close to the body, whereas the undercoat is comprised of dense coat that is soft to touch. They also wear a ruff around the neck and hair on their heads, ears, eyebrows and whiskers. Accepted breed colours include wheaten, black, tan, grizzle and all shades of red.

Grooming a Norwich Terrier is a bit difficult since the wiry coat needs to be brushed several times daily to prevent matting. Often it is important to hire a professional groomer to perform hand stripping which is done at least 2 to 3 times a year. Norwich Terriers also shed throughout the year, most especially during autumn and spring, which means frequent grooming is required. Other than coat care, basic dog grooming is needed to keep them in top condition. This includes brushing the dog's teeth, cleaning its ears and trimming the nails.

The Norwich Terrier is an affectionate dog breed, which makes it a good choice for a family pet. It is friendly with everyone and loves getting the attention. It is a fearless hunter and a good watchdog with a quick bark, but is a poor guard dog because of its size. However, Norwich Terriers don't like to be left alone for hours on end, so it is important that at least one family member stays home. When left on its own, this terrier dog will likely occupy itself by picking up bad habits such as chewing and excessive barking.

Being intelligent dogs, Norwich Terriers are quick to learn, but often their willful nature gets in the way. As such, dog training must start as early as possible and has to be consistent. Since Norwich Terriers were originally working dogs, it is also essential that they are kept busy by providing them with enough mental and physical stimulation.

The Norwich Terrier is a sociable dog and gets on well with older children who are at least 7 to 8 years old. In homes where there are young children, supervision is a must. Norwich Terriers tend to be boisterous at times. When socialised early on, the Norwich Terrier can get along well with the household cat and other dogs. However, other small pets like rabbits, squirrels and the like are considered prey so care should be taken when they are around a Norwich Terrier.

A typical serving for an adult Norwich terrier is 1/2 to 1 cup of high-quality dog food daily. When you find it difficult to determine what and how much to feed your dog, make sure to consult a veterinarian or a canine nutritionist. They will be able to provide recommendation based on the dog's age, size, weight, metabolism, health and activity level.

Whether you feed the Norwich Terrier commercial food or home-cooked meals, make sure that you understand the basics of dog nutrition. Buy commercial dog food that has high-quality animal protein as its top ingredient. Also, stay away from food fillers and preservatives as they don't have nutritional value at all and will only make your Norwich Terrier gain weight.

The Norwich Terrier is a fairly healthy dog breed with a life expectancy of 10 to 14 years. However, common health issues may include Tracheal Collapse, Elongated Soft Palate, Epilepsy, Lens Luxation, Corneal Dystrophy and Luxating Patellas.

The Norwich Terrier is high-energy breed that must be given a moderate amount of exercise to be healthy and well-adjusted. This means it will need at least 60 minutes of exercise daily. Take the dog out for daily walks and allow them to play plenty of games of fetch. The Norwich Terrier can't be trusted off-leash since it is a determined dog when it wants to chase something.

If you are keen on caring for a Norwich Terrier, be ready to pay £300-£600 for a well-bred pedigree puppy. To ensure it stays healthy at whatever age, you will need to feed your dog high quality dog food and treats, which can set you back £30-£40 a month. You would also need to spend on dog accessories such as leads, collars, food bowls, crates, beds, and toys. The combined initial cost for these things is estimated at £200.

Moreover, you need to consider paying for pet insurance to offset veterinary bills in case your dog suddenly falls ill or gets into an accident. Depending on where you live and your dog’s health and age, a time-limited cover can cost £20 a month while a lifetime one can cost up to £43 a month. Generally, insurance companies do not cover routine veterinary consultations, initial vaccinations, boosters, and neutering or spaying, so you may also have to spend an additional £800 annually for these services.

On average, the minimum cost to care for a Norwich Terrier is £50-£90 per month depending on your pet insurance premium. This estimate does not include the rates for other services such as walking and grooming. 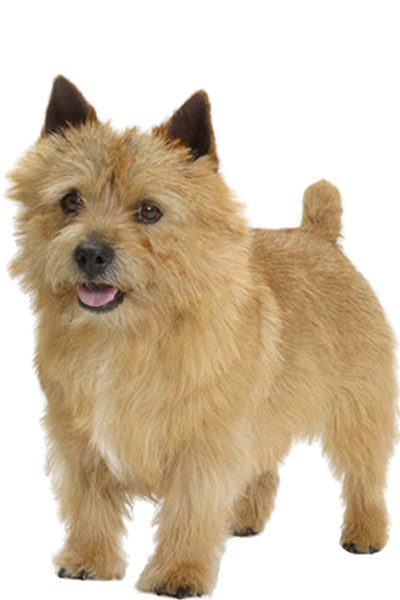 Are you sure the Norwich Terrier is the best breed for you? Take the Pet Breed Selector Quiz to find your perfect breed match.

Are you still hesitating to get a Norwich Terrier? If you're looking for other dog breed options, check out our Pet Finder.

Disclaimer:
The information, including measurements, prices and other estimates, on this page is provided for general reference purposes only.
Norwegian Elkhound
Nova Scotia Duck Tolling Retriever
Contents
Not the breed you're looking for? Click Here
Latest Stories