Looking for a Picardy Spaniel?

The Picardy Spaniel, also called the Epagneul Picard, has been described as a dog breed “created by hunters for hunters.” This gun dog has its origins in France and is related to and even older than the Blue Picardy Spaniel.

This hunting dog is sturdy, loyal, and highly intelligent. It is also highly trainable and docile. As it is good with children and other dogs, it makes for a great family pet, although it may not be suitable for first-time owners.

Said to be among the 2 oldest continental spaniel breeds, the Picardy Spaniel’s origins are shrouded in mystery due to the lack of documentation.  However, canine historians believe that this dog breed came from the Oysel dog, an ancient French spaniel.

The Picardy Spaniel, an uncommon breed, is from the Picardy region of France, in the Valley of Somme. It was crossed with some British hunting breeds in the 19th century. Although some references indicate that this canine had already existed before the 1900s, it was only officially acknowledged in 1907. The standard for the Picardy Spaniel was drawn up in 1908 and remained the same until today.

The highly prized hunting, pointing, and retrieving Picardy Spaniel were favoured by the French nobility. However, the breed’s existence was threatened by the two World Wars. The efforts of Francois Prin, a former breed club president, helped keep the Picardy Spaniel afloat after World War II. In the 1980s, the preservation efforts were rewarded by higher numbers of quality Picardy Spaniels. The breed began winning dog competitions and fans among hunters.

Whilst the modern Picardy Spaniel remains favoured and highly valued by hunters in France, these good-looking dogs remain unknown in many parts of the world. Currently, it is not yet acknowledged by The Kennel Club, although it is recognised by the Fédération Cynologique Internationale, Continental Kennel Club, North American Versatile Hunting Dog Association (NAVHDA), American Rare Breed Association, North American Kennel Club, and United Kennel Club. In France, the Club de l’Epagneul Picards et le Pont Audemer has been set up to help preserve the breed.

The elegant Picardy Spaniel stands at 55-62 cm on average, while its weight ranges from 20-25 kilograms. This dog is considered a large breed with muscular neck and shoulders. Its chest is deep and wide whilst its muzzle is also long and wide, ending in a rounded nose. The rounded head has eyes that exude a friendly and open expression. The low-set ears are covered in silky hair that frames the head.

The Picardy Spaniel’s legs are straight and muscular, with large, round feet that have some feathering in between the toes. Its dense coat may lay flat and straight or long and wavy. The coat colour pattern may be mottled grey with brown patches, with tan points usually found on the head and legs. The brown hues may range from chocolate to sand. The Blue Picardy Spaniel is the dark-coloured variety with no brown points.

Although the Picardy Spaniel has a medium-length, weather-resistant coat, it doesn’t require as much brushing. A weekly session is enough to keep it healthy and tangle-free.

Compared to other French dog breeds, the Picardy Spaniel is hardier and more resilient. Highly intelligent, gentle, calm, protective, and affectionate, this dog is a courageous and hard-working hunting companion. It loves being out with its human . Adaptable and eager to please, this breed is highly trainable in capable and firm hands. As such, it is not a breed recommended to first-time dog owners.

Although the Picardy Spaniel was developed for hunting, it is a suitable family pet as it is good with children and can live harmoniously with other dogs. It is not known to be aggressive and can prove to be a lively canine companion. It likes to be involved in its family’s activities so much that it may develop separation anxiety when left on its own for too long. It may prefer having a lot of space to stretch its athletic limbs, but it can thrive in apartments as long as its exercise requirements are fulfilled daily.

The Picardy Spaniel also excels at various dog sports. It does well with training using positive reinforcement as it is a sensitive dog. It is recommended their natural gifts be developed rather than instructing them to do certain tasks. It enjoys being in the water and will not hesitate to dive in when needed.

Despite its gifts as a hunter and retriever, the Picardy Spaniel is not ideal as a watchdog, although it will bark at strangers.

As with other breeds, the Picardy Spaniel should be fed a high-quality diet that fulfils its nutritional requirements, size, and activity levels. A regular feeding schedule must be followed, preferably twice a day, and the same food be served to avoid gastrointestinal issues. Should there be changes in the diet, it should be done gradually.

On average, the Picardy Spaniel can live for 13-14 years. Being a healthy breed, it is not known to have significant hereditary health concerns. However, it can be predisposed to the following issues:

With its high stamina, endurance, and energy, the Picardy Spaniel needs much vigorous exercise, about 60-80 minutes daily. It likes to have something to do, so a walk is not enough for this breed. A short walk in the morning and a longer and more mentally stimulating session in the afternoon are recommended. It should also be allowed to play off lead so it can gallop freely. However, as a puppy, it must not be overexerted as it is still growing. If in a home with a garden, the fencing must be very secure as the Picardy Spaniel is a naturally inquisitive dog.

If you are interested in caring for a Picardy Spaniel, you would need to go on a waiting list as this breed is rare in the UK. The price for a well-bred pedigree puppy is at least £800. To ensure it stays healthy at whatever age, you will need to feed your dog high quality dog food and treats, which can set you back £40-£50 a month. You would also need to spend on dog accessories such as leads, collars, eating bowls, crates, beds, and toys. The combined initial cost for these things is estimated at £200.

Moreover, you need to consider paying for pet insurance to offset veterinary bills in case your dog suddenly falls ill or gets into an accident. Depending on where you live and your dog’s health and age, a time-limited cover can cost £22 a month while a lifetime one can cost up to £44 a month. Generally, insurance companies do not cover routine veterinary consultations, initial vaccinations, boosters, and neutering or spaying, so you may also have to spend an additional £1000 annually for these services.

On average, the minimum cost to care for a Picardy Spaniel is £70-£100 per month depending on your pet insurance premium. This estimate does not include the rates for other services such as walking and grooming. 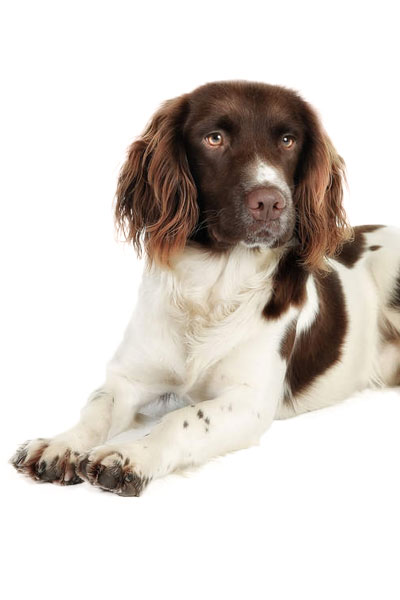 Are you sure the Picardy Spaniel is the best breed for you? Take the Pet Breed Selector Quiz to find your perfect breed match.

Do you think a Picardy Spaniel is your perfect companion? Use our Pet Finder to find other breeds suitable for your personality and lifestyle!

Disclaimer:
The information, including measurements, prices and other estimates, on this page is provided for general reference purposes only.
Pharaoh Hound
Pinscher
Contents
Not the breed you're looking for? Click Here
Latest Stories

Search and rescue dogs are saving hundreds of lives each year. Do you plan to make your furry pal a part of this heroic brood? Find out if he has what … END_OF_DOCUMENT_TOKEN_TO_BE_REPLACED