Looking for a Schipperke?

Bred to guard barges and canal boats in Belgium and the Netherlands, the schipperke is one of the ultimate watchdogs and ratters. The schipperke is nicknamed 'little captain' because of its tendency to stand at the front of the boat scanning the horizon. The schipperke is a joyful pet dog that is now an excellent family companion.

Are you ready to own a schipperke? Before you decide, here is a brief background of this bright little river dog.

Originally, it was called spitske, but was given the new name schipperke (which translates to little captain or little shepherd) when a breed club was established in 1888. Back then, schipperkes were often seen guarding the boats between Brussels and Antwerp, hence the name. However, the little watchdog was already a celebrated success when Queen Marie Henriette favoured the breed after seeing one in a show in Brussels in 1885. Its popularity reached the United States in 1888 and a breed club was formed there in 1929. The breed is also recognised by the Kennel Club in the UK.

The schipperke is a lithe, small utility dog with a face resembling a fox. This breed has a cobby body, which means short and square, standing 25–33 centimetres and weighing 11–18 pounds. The schipperke has a broad, flat skull and a moderately long and pointed muzzle. The ears are triangular and sit atop the head.

In the US and Canada, most schipperkes, if not all, are without tails since these are traditionally docked at birth. However, in the UK, tail docking has been banned except for certified working dog breeds.

The schipperke has a thick double coat that is rough, moderately short, and forms a thick ruff around the neck. In addition, it sports thick culottes or long and thick hair at the back of the dog's thighs. Since schipperke was bred to be a river dog, its coat is dense and water-resistant. In other words, the breed is low-maintenance with respect to dog grooming. It will only require weekly brushing, except when it starts shedding its undercoat.

During shedding season, which is two or three times a year, grooming can be labour-intensive and time-consuming. With that said, most owners will hire a professional groomer. However, the rest of the dog grooming routine is manageable (e.g., nail trimming, dental care, and ear cleaning).

Curious, alert, and confident, the schipperke has been an admirable watchdog for centuries. Until today, it still excels at the task of guarding and protecting its family. It is a happy little pet that thrives in a family environment and bonds deeply with its owners, including young children. This dog is wary of strangers and can quickly bark, which is one of the reasons why it is a popular watchdog.

Since the schipperke is a small dog, it tends to compensate and act dominant when left unchecked or when its place in the pack is not established. With that said, schipperke can be difficult to house-train. It can also be a horrible and persistent barker. These tendencies can be curbed when given proper training and early socialisation.

The schipperke is great with children in the house because it is naturally gentle, albeit a little enthusiastic. However, always bear in mind that interaction between the two should be supervised regardless of the dog’s disposition. The schipperke is also skittish around children it doesn’t know, so care should be taken when other kids come over to play. It gets on well with other dogs, especially when socialised. But since this is a protective and territorial breed, it pays to be careful, including around smaller animals.

A typical serving for an adult schipperke is 1 1/4–1 3/4 cups of high-quality dry dog food per day. Unless stated otherwise, the amount of serving is the total that is recommended over a twenty-four-hour period. But without a doubt, there is no easy way to determine exactly how much a dog should be eating since it depends on several factors. It is best to consult a veterinarian about the dog’s diet instead of relying on guesstimates.

Here is a typical daily calorie need of an adult schipperke that weighs eighteen pounds:

All dogs require a certain amount of energy to sustain their daily activities. Energy is generally measured in terms of calories which are found from three dietary components such as protein, carbohydrates, and fats. In addition, dogs should also consume food rich in vitamins and minerals and most importantly, water. When you buy commercial dog food, make sure that all the necessary ingredients, especially protein, are listed for the dog’s optimum health.

Just like humans, dogs can get sick. In the case of the schipperke, health issues may include the following, either genetic or acquired:

When it comes to exercise requirement, the schipperke will require daily workouts (at least forty to sixty minutes). It loves to take long, brisk walks and run off-lead. Exercises help dogs burn off extra energy, so it is helpful to engage the schipperke in intense play sessions. Without the necessary exercise, trust that this active dog will wreak havoc around the house.

Getting a Schipperke puppy might take time as you first need to go on a waiting list. Very few puppies are bred and registered each year. As for the cost, be ready to pay at least £400 depending on the breed’s quality. To ensure it stays healthy at whatever age, be ready to spend £20-£30 a month on high-quality dog food. You also need to factor in the initial cost for dog accessories and equipment such as food bowls, leads, collars, and beds, which will likely be about £200 depending on the brand.

When it comes to healthcare, you should be prepared in case your dog suddenly falls ill or gets into an accident. Depending on where you live and your dog’s health and age, a time-limited cover can cost £19 a month while a lifetime one can cost up to £41 a month. Generally, insurance companies do not cover routine veterinary consultations, initial vaccinations, boosters, and neutering or spaying, so you may also have to spend an additional £800 annually for these services.

Roughly, you will be setting aside £50-£80 a month for recurring expenses, depending on the type of insurance cover you choose. This estimate is also exclusive of walking or grooming services that you might want to use at times. 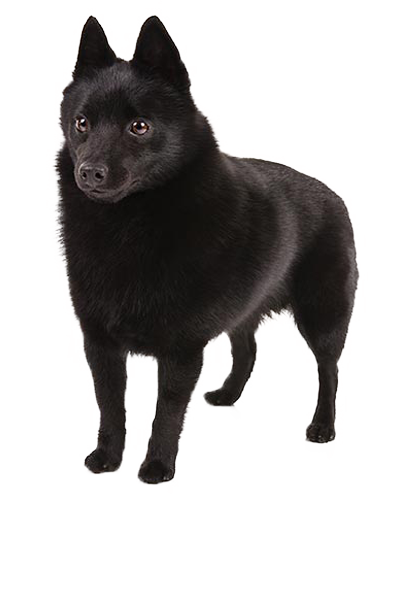 Are you sure the Schipperke is the best breed for you? Take the Pet Breed Selector Quiz to find your perfect breed match.

Can’t decide yet? Consider other dog breeds using our Pet Finder, so we can match you with dogs that fit your lifestyle.

Disclaimer:
The information, including measurements, prices and other estimates, on this page is provided for general reference purposes only.
Samoyed
Schnauzer
Contents
Not the breed you're looking for? Click Here
Latest Stories

Australian Shepherds were bred to be herding dogs that can withstand cold climates. They sport dense and thick double coats that provide them warmth … END_OF_DOCUMENT_TOKEN_TO_BE_REPLACED