Looking for a Sheepadoodle?

The Sheepadoodle dog breed is a cross between an Old English Sheepdog and a Standard Poodle. This designer dog also goes by the names Sheepdoodle, Sheeppoo, Sheepdogpoo, and Sheep-a-poo. The Sheepadoodle size variation ranges from standard to miniature.

Sheepadoodle breeders aimed for this mixed dog breed to be a loving, intelligent, and hypoallergenic family pet. This designer dog breed is very amiable, making him both a man's and pet's best friend. He can be challenging to train if he inherited the Old English Sheepdog’s stubbornness.

Grooming the Sheepadoodle breed can be time-consuming as he has a thick coat. As an active dog, he needs a great deal of exercise to keep him in tip-top shape. This mixed breed can live from 12–15 years.

The Sheepadoodle is a mixed breed dog that was created by crossing an Old English Sheepdog and a Standard Poodle. Fanciers of this medium to large dog breed nicknamed him Sheepdoodle, Sheeppoo, Sheepdogpoo, and Sheep-a-poo.

To learn more about this designer dog, let’s get to know his parent breeds. The Poodle is a purebred German dog that specialises in waterfowl hunting. He slowly became a favourite of upper-class ladies because of his friendly and sweet personality. Soon enough, he turned from a prized hunting dog into a beloved canine companion.

The second parent of this mixed breed dog is the Old English Sheepdog. He was mainly created to herd livestock. In the 1800s, he became a popular dog breed amongst farmers and was used to drive cattle and sheep to the market. The breed also proved to be capable of carrying out heavy tasks around the farm.

By combining these 2 wonderful parent breeds, the breeders were able to create a designer dog breed that has the energy and intelligence of the Sheepdog and the amiability and low-shedding traits of the Poodle.

Much like most Poodle mixed breeds, the Sheepadoodle has amassed countless fans far and wide. The breed's popularity shot up after figure skaters Meryl Davis, and Fedor Andreev adopted Bilbo Tootie-Rose Baggins, a Mini Sheepadoodle.

As Sheepadoodles are mixed breed dogs, they are not yet recognised by the Kennel Club and American Kennel Club. On the brighter side, this designer dog breed is acknowledged by the International Designer Canine Registry (IDCR) and Dog Registry of America, Inc.

The Sheepadoodle breed is a hybrid dog that comes in different sizes. Standard Sheepadoodles range from medium to large.

On the other hand, Mini Sheepadoodles mature rather fast than their bigger counterparts. Miniature Sheepadoodle puppies will become fully grown once they turn 11–13 months of age.

The Sheepadoodle dog comes in varying appearances because he is a mixed breed. However, in general, he has a teddy bear-like appearance.

His body is solid and strong, whilst his skull is broad and dome-shaped. He possesses either a square or a rounded face with an elongated snout. He has small eyes and drooping ears.

The coat of this Poodle mixed breed is medium length and can either be straight or curly. He can sport solid black and white colours. He can also have a combination of both colours.

Some of these dogs possess a white and red coat. Others have a solid brown or a grey coat. However, these types of colourations are relatively rare.

Grooming the Sheepadoodle dog breed involves 2–3 times a week of brushing. It is recommended to get your dog’s coat clipped every 8–12 weeks. Doing so will greatly minimise grooming time as well as the formation of matts and tangles.

Bathe your dog only when necessary, meaning when he is very dirty or stinky. Avoid frequent washing as it can damage his skin and coat. Do not forget to clip his nails and clean his ears every week. Trim the hairs around their ears to hinder bacteria from proliferating and avoid ear infections.

Brush the Sheepadoodle’s teeth daily if possible to prevent dental problems. Since the dog breed has a thick coat, he fares well in cold climates.

However, when the hot season starts, he is at risk of heatstroke. Thus, limit your dog's outdoor time during warmer days. Also, make sure that indoor spaces are air-conditioned to keep him cool and cosy.

Yes, Sheepadoodle dogs do shed like all canines. However, despite their dense coat, they do not shed much. So, if you are planning to get this mixed breed, getting rid of dog fur in your home is the least of your worries.

The Sheepadoodle breed is great with children as he is quiet and calm. Unlike other dog breeds, he is also not a domineering canine. So he is a great match for a multi-pet household.

Note that this designer dog breed does have herding tendencies. They may chase and nip smaller children and animals. Training Sheepadoodle puppies at a young age can help curb this behaviour.

Training Sheepadoodle puppies can either be challenging or a breeze depending on the trait they inherited from their parents. The puppies who take after the Old English Sheepdog can be quite obstinate. However, those that are more like their Poodle parents are relatively easy to train.

In general, the Sheepadoodle dog breed is highly intelligent as both of his parent breeds are smart and clever dogs.

Always aim to make training sessions a short but fun session for your dog. Use positive reinforcement methods to keep him motivated. Harsh punishments are extremely discouraged as these will cause your dog to become apprehensive and develop behavioural problems.

Is a Sheepadoodle a good family dog?

Yes, the Sheepadoodle dog breed is a good family dog. He is praised for being even-tempered and calm. Deeply attached to his family, this mixed breed dog cannot be left on his own for long periods. At least one family member should be with him throughout the day to keep boredom and loneliness away.

No, Sheepadoodle dogs are not known to be aggressive. They are gentle family pets that thrive in human interaction. That said, lack of proper socialisation and training can turn even the most loving dog into an aggressive one.

Neglect and abusive ownership are also one of the most common causes that can make any dog violent and wary around humans.

Do Sheepadoodles bark a lot?

No, Sheepadoodles are not barkers, but they still make good watchdogs. That’s because they bark to alert their owners if a stranger is approaching. Whilst they have a talent for watchdog duty, these pooches are not suitable as guard dogs as they are too friendly and good-natured.

Choose a premium-quality dog food that is designed according to your Sheepadoodle’s size and age. That’s because its formula will be based on his regular nutritional requirements. This ensures that he will acquire the right amount of essential vitamins and minerals.

A full-grown Sheepadoodle dog needs 3–4 cups of dog food every day. Since this mixed breed is prone to obesity and digestive problems, the meals should be split into 2–3 throughout the day. Be sure that your dog has unlimited access to clean and fresh water each day.

Sheepadoodles are full of energy and vigour as he is a part-herding dog. To keep these active dogs healthy and fit, they require regular exercise and mental stimulation. Spend at least 1–2 hours exercising your dog.

Long walks and runs combined with fun dog games such as fetch and hide-and-seek are enough to expend the Sheepadoodle’s energy. Let this high-energy dog run and frolic off-lead in the back garden if you have one. Never forget to check the fences beforehand to ensure that they are safe and secure.

The Sheepadoodle dog breed is healthy but may inherit a few genetic health issues from his parents. Below are some of the most prevalent health conditions in this mixed dog breed:

Large or giant Sheepadoodles are highly at risk of dog bloat. It is a life-threatening gastrointestinal condition that causes the stomach to twist. Immediate treatment via surgery is necessary to save the life of the affected pooch.

This condition is the result of the hip joint and socket’s deterioration. Aside from genetics, overexercising and injuries can cause its development. Fortunately, it is curable through medications and surgery.

The lack of hormone production from the adrenal gland results in Addison's disease. Dogs with this disease will show signs of lethargy, weight loss, vomiting, and diarrhoea. This condition can be treated by administering particular medications.

What is the life expectancy of a Sheepadoodle?

The life expectancy of the Sheepadoodle dog breed is about 12–15 years. Increase your furry friend's longevity by keeping your home a safe and relaxing haven for him. Interact with him daily and provide him with healthy food and enough exercise. Most importantly, never skip regular vet check-ups to be up-to-date with your dog’s current state of health.

How much is a Sheepadoodle?

The price of Sheepadoodle puppies can range from £1,000–£3,000. Make sure to search for your ideal puppy from reputable Sheepadoodle breeders.

The Standard Sheepadoodle breed is a medium to large dog. Yearly cost for dog food for a breed this size is around £335–£625 a year. It is essential to provide your puppy with basic supplies, including his dog bed, toys, and crate. Expenses for these items can amount to £200–£400.

Vet care is another important aspect of your Sheepadoodle's life. Be ready to pay around £30–£60 for every vet check-up session.

Getting your dog vaccinated for the first time will cost about £100–150, whilst yearly boosters are around £50–£60. Spaying or neutering your puppy may lead you to spend around £110–£400. The combined cost for worm and tick and flea treatments is £15–£30.

Getting pet insurance for your Sheepadoodle is recommended as it will lower your need to spend a large amount of money in case of emergencies. The monthly pet insurance fee for a mixed breed dog is around £25. Mind that the price may change depending on your dog's age, state of health, and the place you are residing in.

Sickly and elderly dogs tend to have more expensive insurance fees. Some regions in the UK, including London, South East, and South West have high insurance expenses compared to Northern Ireland, Wales, and the North East.

Are you sure the Sheepadoodle is the best breed for you? Take the Pet Breed Selector Quiz to find your perfect breed match.

Dog Breed Selector Quiz
Disclaimer:
The information, including measurements, prices and other estimates, on this page is provided for general reference purposes only.
Shar Pei
Shetland Sheepdog
Contents
Not the breed you're looking for? Click Here
Latest Stories

Dogs are common hosts for various intestinal worms. Many dog owners are wondering, “What home remedy can I use to deworm my dog?” We have  6 natural … END_OF_DOCUMENT_TOKEN_TO_BE_REPLACED 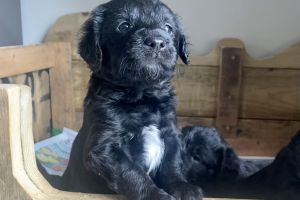 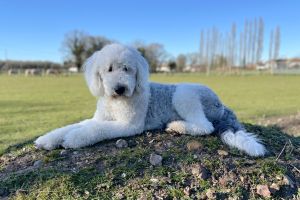