Searching for a Victorian Bulldog?

This low-shedding dog breed is low-maintenance. His exercise needs are low as well. The average lifespan of the Victorian Bulldog is 10–13 years.

What is a Victorian Bulldog?

The person behind the Victorian Bulldog breed's existence is a man named Ken Mollett. He was a breeder who has a great fondness for Bulldogs. In 1985, he started a breeding programme in London together with Derek Mollett, his brother, and Graham Woods.

They were aiming to create a healthier Bulldog breed that can reproduce naturally and has fewer breathing problems. These breeders also wanted to make him taller, leaner, and more athletic.

The Bulldog breeds that Mollett and his group used to make the Victorian Bulldog were exclusively registered to the UK Kennel Club. This is to keep the breeding lines fairly pure. Unfortunately, Mollett's partnership with the other two breeders didn't last. It is thought that it may be due to a conflict of interest.

Despite these circumstances, Mollett continued to work on recreating the Victorian Bulldog breed. He was able to distinguish the characteristics of the original Victorian Bulldog by looking at the breed's old photographs, paintings, engravings, writings, and artworks. His relentless efforts turned out to be successful.

In 1998, the Victorian Bulldog Society was established by Mollett and Susan, and Hue Davies. They were able to have around 50 members and held yearly dog shows of the breed.

Mollett died in 2002, and his wife handled the responsibilities of running the club. It was in an effort to get the breed officially recognised by major kennel clubs. As of now, the Victorian Bulldog breed is acknowledged by two minor registries. These are the American Canine Association and the Dog Registry of America.

Victorian Bulldogs have a muscular and athletic build with thick bones. They have either button- or rose-shaped ears. Their eyes are low-set and spaced wide apart. They have a wide and well-defined chest.

Their large, wide nostrils have loose skin. Although they possess the short face and broad muzzle of a Bulldog, it isn't short enough to cause breathing difficulties.

The Victorian Bulldogs' thick necks have dewlaps on either side because of their loose skin. They have broadly spaced shoulders and strong, straight legs. Their feet are round and compact.

Their tails can be corkscrew-shaped, straight, or dangle downwards. However, it should not be carried over the back.

The Victorian Bulldog breed is single-coated. His fur is dense, short, and straight. His fur colouration greatly varies, but the most common are solid red and white.

There are also brindle, pied, and fawn coloured coats. Any coat that comes in solid black or a combination of black and other colours is considered undesirable.

Victorian Bulldogs shed moderately throughout the year. However, it becomes heavier during shedding seasons, which occurs twice a year. This dog breed is not hypoallergenic and may not be the right fit for dog owners with allergies.

Grooming the Victorian Bulldog is not as time-consuming as other breeds as he is low-maintenance. Brush your dog at least 2 or 3 times a week using a firm bristled brush.

As the Victorian Bulldog has loose skin on his face and neck, make sure to wipe it every day. Use a damp cloth to clean the folds. Check the creases regularly and dry these areas when they become too moist.

Bathe your Victorian Bulldog occasionally to keep his coat from drying out and keep skin problems at bay. Once a month or when necessary.

The Victorian Bulldog breed needs his ears checked and cleaned every week. Look out for any signs of infection such as swelling, foul odour, redness, and unusual discharge. Inform the vet if your dog shows these symptoms. Trim his nails weekly and brush his teeth every day.

As a smushed-face breed with loose jowls, the Victorian Bulldog is prone to drooling. Always keep a clean towel with you to wipe off his slobber. Other ways to prevent his drool from dropping on the floor or various furniture is by tying a handkerchief around his neck.

What is the difference between a Victorian Bulldog and an English bulldog?

Victorian Bulldogs are leaner and larger than English Bulldogs. They have smaller heads that are more proportional to their bodies. Their noses are also longer, allowing them to breathe more easily. English Bulldogs sport bigger, wider heads and stockier bodies compared to their Victorian cousins.

These breed's differences in physique largely affect their health. Victorian Bulldogs are considered healthier than English Bulldogs. They are less prone to breathing problems and other health issues that are common in English Bulldogs. These include genetic diseases and cardiovascular disorders.

Birthing is easier for the female Victorian Bulldog, as she has lower chances of delivering by caesarean section. In contrast, 80% of English Bulldogs give birth via caesarean section to avoid complications due to their large heads.

The Victorian Bulldog breed has an imposing appearance, which makes him look intimidating and unapproachable. However, his disposition is far from ferocious or aggressive. He is a very affectionate and loving family dog. This light-hearted dog loves to play as well as relax on the couch.

The Victorian Bulldog breed is generally quiet and rarely barks. But as a protective and loyal companion dog, he may bark to warn his owner if there is a threatening presence around their home. For this reason, they are very suitable as guard dogs. Whilst they are often quiet dogs, they may snore as they sleep.

The Victorian Bulldog is patient around children, so he is a great companion dog for them. In any case, educate your children to handle their furry friend gently. Much like any dog, rough treatment can hurt or terrify him. He may respond by aggressively protecting himself.

Thus, there should be no ear tugging, tail pulling, or hitting during dog-children playtime. Always monitor their interactions as it allows you to correct them and prevent untoward accidents.

The Victorian Bulldog breed is a wonderful companion for other pets. Early proper socialisation and training will help your dog become welcoming and friendly to other animals. Never skip any of these processes, as it can affect how he views the world around him. Lack of socialisation can turn him into a dog that gets easily spooked at anything.

The Victorian Bulldog is easy to train if you use the right approach. As he is a gentle dog, use gentle training methods such as clicker training for positive reinforcement. Training sessions should be short to keep him focused and motivated.

Whilst gentleness is crucial in training the Victorian Bulldog, be firm and consistent too. If you are too lenient and indecisive with your commands, it will confuse your dog and cause barriers in his learning.

That said, never physically hurt or shout at him. It can damage his trust in you and lead him to exhibit behavioural problems.

Bulldog breeds, including Victorian Bulldogs, are commonly painted as aggressive and vicious. However, mind that these dogs are naturally protective of their homes and loved ones. Thus, they are only likely to attack if they are provoked, or their family members are in danger.

A Victorian Bulldog should be completely socialised at a young age. Exposing him to different situations and people will improve his confidence. He will be able to distinguish those who mean no harm to his family members from the ones with bad intentions.

Mind that dogs that came from abusive homes are more likely to become aggressive. Always treat your canine companion with kindness and patience. In return, he will also shower you with love and undying loyalty.

Raw feeding is an option as well, as it is a part of their primitive diet. Make sure to monitor his protein intake, though.

Excessive amounts of proteins can cause hot spots. Your dog's raw diet should not only be composed of bones and meat. Incorporate raw eggs, fruits, yoghurt, and half-cooked vegetables as well.

Before implementing this diet, consult the vet and ensure that it is appropriate for your dog. As a brachycephalic dog, the Victorian Bulldog breed is prone to heatstroke. Always keep his water bowl full of fresh water, especially during hot weather.

How long do Victorian Bulldogs live?

With proper care, the Victorian Bulldog breed can live between 10 and 13 years. Careful selective breeding safeguards him from the common health conditions affecting typical Bulldog breeds. However, he is still prone to a few health problems, including:

Victorian Bulldogs are indoor family dogs. They would rather relax on the couch than explore the outdoors.

Although they are not very active, never let them skip exercise. Or else they will gain too much weight and suffer from obesity. A balanced and healthy diet should also be paired with exercise to effectively manage their weight.

Hip dysplasia is a common orthopaedic problem in the Victorian Bulldog breed. The malformation of the hip's ball and joint socket causes this disease. It is passed on to the breed through genetics. Treating it will require medication, physical therapy, or surgery.

Victorian Bulldogs have sensitive skin and are prone to various allergies. Their allergic reactions can be brought on by various factors. These include food allergens, fleas or ticks, dust, and pollen.

This laid-back dog has lower energy levels than other breeds. He only needs 20 to 40 minutes of daily exercise. Taking him out for 2 walks a day is sufficient enough to meet his exercise requirement.

If you have a small yard, take time to play mentally stimulating games and activities with him. This dog breed is adaptable and can thrive in either a city or a rural area. Always have fresh water during and after exercise to help your dog's body to cool off.

How much are Victorian Bulldogs?

The price for a Victorian Bulldog puppy is around £2,200 to over £2,800. Just be warned that several shady breeders have created their own version of the breed without following the breed standard. They produce low-quality and sickly litters.

Prepare £100 as payment for initial vaccine shots and £50 for yearly boosters. Acquiring pet insurance for your Victorian Bulldog puppy will cost you around £28 monthly. 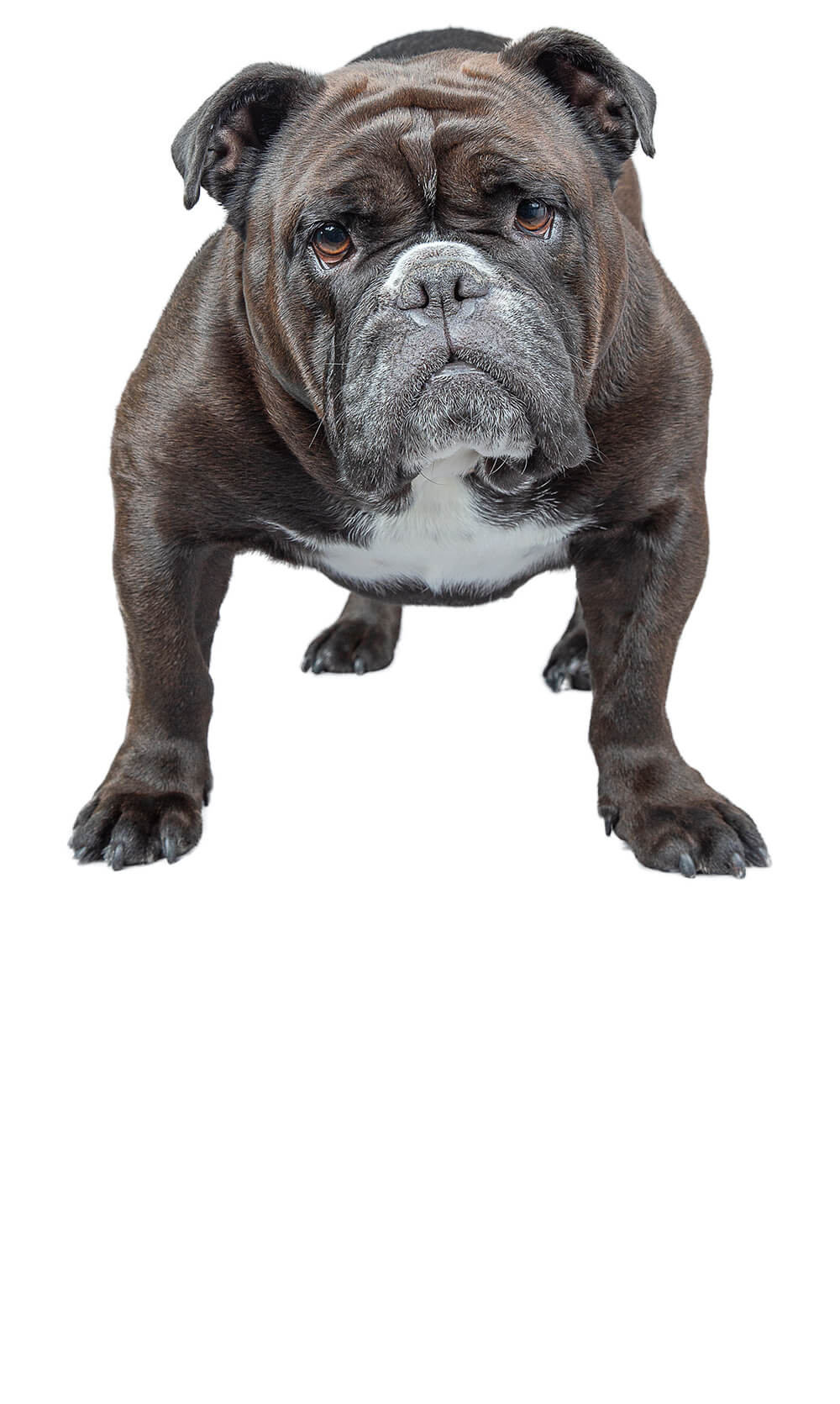 Are you sure the Victorian Bulldog is the best breed for you? Take the Pet Breed Selector Quiz to find your perfect breed match.

Dog Breed Selector Quiz
Disclaimer:
The information, including measurements, prices and other estimates, on this page is provided for general reference purposes only.
Utonagan
Weimaraner
Contents
Not the breed you're looking for? Click Here
Latest Stories