Thinking of buying or adopting a Wolamute?

The wolamute was produced after crossing a timber wolf with an Alaskan malamute. Originating from the USA, this wolf dog is said to be amongst the oldest of such hybrid canines. Also called the malawolf, this arctic crossbreed is ideal for those residing in cold climates, although it can survive in warmer weather. It has a mix of its parent breed’s temperament, although the resulting combination varies. However, those that have more of its malamute parent’s attributes are said to make good pets.

The wolamute is a wolf dog, the result of the crossbreeding of the timber wolf and the Alaskan malamute. It was developed in the USA and is considered one of the earliest known hybrid canine breeds. It has been believed that this crossbreed has been utilised as working dogs for thousands of years in the arctic regions.

Despite this, not much is known about this unique canine. In fact, the current presence or number of wolamutes in the UK has not been clearly established yet. This breed has been, so far, recognised by the Dog Registry of America, Inc.

The wolamute size, in terms of body length, ranges from 56 and 84 cm. Its weight ranges from 52 and 80 kg. This proves that the giant wolamute is one canine you just cannot ignore when it comes into view.

This wolf dog has a “primitive” look. It has pointy ears, a somewhat stocky and strong build, and a muscular body. Its dense, medium-length coat is its most distinctive feature. It has “wolf” coat colours and patterns. It could be brown, grey, white, and cream. The solid black wolamute is also a known variety, but a very uncommon one. The darker hues are usually on its body, whilst the lighter fur is on its legs and face.

The wolamute’s all-weather coat should be brushed once or twice a week to keep it in good condition and tangle-free. Due to its size and coat density, hand plucking this dog’s excess hair is recommended. Shedding happens two times a year.

The wolamute’s temperament depends on the mix of its parent breeds. Some malawolves are more malamute than wolf, and others are vice versa. Generally, due to its wolf instincts, this huge crossbreed has a high prey drive and will chase small animals. Small children must not be placed in its presence.

Territorial, intelligent, protective, and hardy, this wolf dog is affectionate with its humans. It can be defensive and standoffish at times though, particularly with strangers. As such, it does not make a good watch dog as it is not known to alert its owners about intruders.

Being an intelligent canine, the wolamute is highly trainable under experienced hands. Consistency and firmness is necessary to make the training process a successful one. Due to its need for a lot of exercise and unpredictable temperament, this dog is not recommended for new owners.

Further, this crossbreed should not be left by itself for long periods as it is prone to separation anxiety. It may be destructive if left alone for long or not exercised sufficiently enough.

To ensure that the wolamute develops into a well-balanced pet, it should be socialised early. This can be done as early as 4 weeks old until its 10th month. This hybrid canine should be exposed to various people, animals, vehicles, and other typical objects in or out of the home.

Follow a set feeding schedule consistently and provide the same food that your wolamute is used to in order to avoid stomach issues. However, if you need to shift to another type of high-quality food, do so gradually. This helps your hybrid pet adjust accordingly without complications.

Puppies must be fed 3–4 times a day, whilst adult ones can be fed twice a day. Adult wolamutes should be fed about 4–6 cups of high-quality food daily depending on its size and activity level.

The average wolamute lifespan is 10 to 15 years. Although a strong and robust canine, this breed is known to be affected by the following health issues:

As dog with a very impressive stamina, this crossbreed should be exercised for at least an hour daily. When walked outdoors, it should be put on a lead. Owners with yards should set up a fence high enough to keep this big dog from leaping out and escaping. It should also be provided with many alternatives for its recreation, such as a variety of toys. This breed is prone to indulging in undesirable behaviour when bored.

Wolamute breeders are uncommon in the UK. As such, acquiring one takes considerable time. Generally, a wolamute puppy costs between £550 and £1,400. The monthly costs of caring for are dependent on the area and the special needs of the said canine. 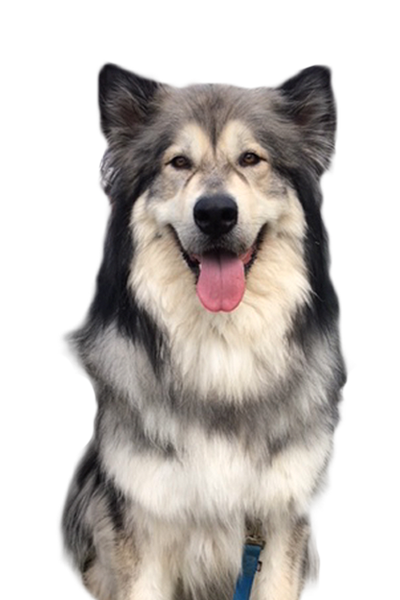 Are you sure the Wolamute is the best breed for you? Take the Pet Breed Selector Quiz to find your perfect breed match.

Are you ready to take home a Wolamute? If you are not 100% sure, try our Pet Finder for more suggested breeds.

Disclaimer:
The information, including measurements, prices and other estimates, on this page is provided for general reference purposes only.
Wirehaired Vizsla
Yorkie poo
Contents
Not the breed you're looking for? Click Here
Latest Stories

Dogs are common hosts for various intestinal worms. Many dog owners are wondering, “What home remedy can I use to deworm my dog?” We have  6 natural … END_OF_DOCUMENT_TOKEN_TO_BE_REPLACED