Thinking of buying or adopting a Munchkin?

The short-legged Munchkin Cat is named after the diminutive characters in “The Wizard of Oz.” But don’t let its floor-hugging height fool you – this feline can move very fast on its four feet. Active, outgoing, and sweet-looking, this kitty is an adorable addition to families with children or other pets.

Short-legged cats have been around for some time now. However, they seemed to have disappeared during World War II. They re-emerged decades later in Russia (1956) and in the US (1970s). It was only in the 1980s that feline fanciers actively bred what they also call the “kangaroo cat.”

The founding cat of today’s Munchkin is a stray, short-legged, pregnant cat called Blackberry from Louisiana, USA. It gave birth to a litter of similarly stubby-legged kitties in 1983 after it was taken in by Sandra Hockenedel.

One of its male kittens was given to her friend Kay LaFrance, who allowed it to roam freely outdoors. Soon enough, her area had more sightings of short-legged kitties. This phenomenon prompted the ladies to consider developing what appeared to be a new breed.

In 1991, the Munchkin was finally presented to the public through a televised cat show. Its development was later taken up by TICA in 1994, ensuring the diminutive felines are bred responsibly.

Genetic studies revealed that the unusually short limbs were due to a natural genetic mutation. In fact, the gene responsible for the Munchkin’s short legs is the same one found in Dachshund, Basset Hound, and Welsh Corgi. It was also determined that breeding a Munchkin Cat to another can lead to the death of a quarter of the resulting litter. As such, this feline is usually bred with longer-legged breeds.

In 2003, this “sausage cat” was awarded Championship status by TICA. It is not yet recognised by the GCCF.

Pictures of Munchkin Cats show them with legs of varying shortness. Some have limbs that are shorter than those of others. This is influenced by the type of long-legged parent cat bred with the Munchkin parent.

This medium-bodied kitty has a wedge-shaped head, walnut-shaped eyes, and prominent whisker pads. Its neck is muscled and firm, extending to a body that has an upward-sloping back. This, along with the shorter front legs and longer hind legs, earned it the moniker “kangaroo cat.” Its leg length has been categorised into three types: standard, super short, and rug hugger. Its paws are round and compact.

The Munchkin coat comes in 2 varieties: long (MKL) or short-coated (MK). The longer coated ones tend to have Lynx-like colouring on the tip of their ears. Patterns and coat colours encompass a wide variety of hues, like a white or grey Munchkin cat.

Grooming is easy with this breed. The short-haired types can thrive on once weekly brushings. The long-haired ones need to be brushed more each week to keep the coat mat-free.

The Munchkin Cat is an active and outgoing feline who loves playing with humans and animals. Its friendliness makes it tolerant of being handled. When not moving about, it is likely to stand on its rear legs like a rabbit and observe anything that catches its fancy.

It can move “like a ferret” on the ground and can climb up to high spots with ease. When not moving about, it is likely to stand on its rear legs like a rabbit and observe anything that catches its fancy.

Further, it forms strong bonds with its owners and is likely to experience separation anxiety. As such, it should not be left alone for long periods. It is also known to follow its humans around, keen on knowing what is going on.

An intelligent kitty, the Munchkin Cat likes to engage in interactive play. It can even figure out ways to get to a high place. It should be mentally stimulated to keep it balanced. Puzzle toys and teaching tricks help do this.

The Munchkin Cat should be provided with a nutritious diet that fulfils its requirements. It should be consistently given the same food following the same feeding schedule. If there are changes to its diet, those must be done gradually to prevent tummy problems.

The serving portions should depend on the cat’s weight, age, and activity level. Its meals must include at least 25% protein and just 5% carbohydrates.

On average, the munchkin cat has a life expectancy of 12 to 15 years. The cat breed is thought to be generally healthy but may likely develop lordosis because of her short legs. She is also prone to be afflicted with pectus excavatum. These health issues are related to the cat breed’s genetic mutation.

The munchkin cat is surprisingly agile and highly active despite her short legs. She is usually seen running around and climbing on top of high places. She does not need encouragement to exercise, as she is an energetic extrovert. Her short legs do not stop her from climbing and jumping between furniture and zooming around.

As a smart cat, the munchkin can be trained to play fetch and other interactive games. Getting this fun-loving feline to do physical activities will help in keeping her weight in check. If she is left alone in the house, surround her with mentally challenging toys and cat trees to keep her busy.

How much is a Munchkin Kitten? A responsibly bred Munchkin Cat for sale may cost at least £200. You should get one from reputable breeders to ensure that you are getting a healthy pet. Average insurance expenses would cost £16 (basic) or £25 (lifetime) monthly. Food costs may range from £15-£20 each month. For vaccinations, boosters, annual checks and other veterinary costs, pet care costs may add up to more than £600 each year.

On average, a Munchkin owner will spend about £40-£60 per month. The insurance costs can also affect this estimate. For its entire lifetime (12-14 years), the expenses can be as low as £5,760 to as high as £10,080. This estimate does not include the initial costs incurred in acquiring this cat. 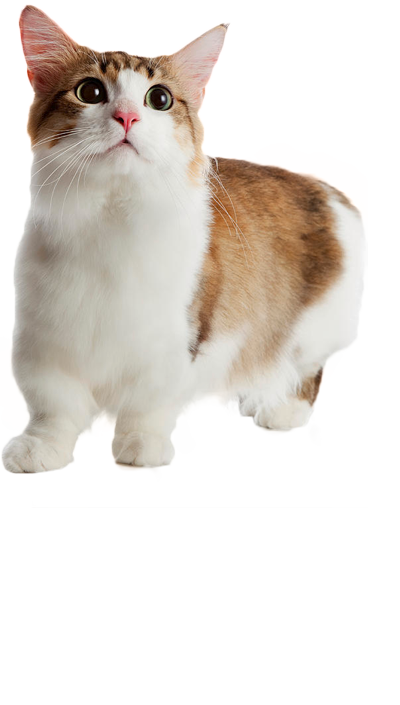 Are you sure the Munchkin is the best breed for you? Take the Pet Breed Selector Quiz to find your perfect breed match.

Is the Munchkin your purrfect match? Take our Cat Finder so you can find the most suitable breeds for you.

Cat Finder
Disclaimer:
The information, including measurements, prices and other estimates, on this page is provided for general reference purposes only.
Manx
Nebelung
Contents
Not the breed you're looking for? Click Here
Latest Stories

Abnormal dog behaviours are often overlooked during their early stages. Many dog owners misinterpret these behaviours. As a result, dogs end up in … END_OF_DOCUMENT_TOKEN_TO_BE_REPLACED