Searching for a Snowshoe?

The Snowshoe emerged in the US after some kittens in a Siamese litter were born with white paws—a fault in the said breed. This physical trait is very hard to replicate, which makes them a unique feature in this cat breed.

The Snowshoe cat is a loving, loyal, and adorable pet suited for families who can shower it with lots of attention. Its coat is low maintenance and easy to groom. It is a healthy feline that tends to live long and gets along with everyone, even other pets.

The Snowshoe cat got its name not because of its ability to tread snow skilfully. Rather, it was due to its distinctive physical trait—white paws.

In the 1960s, a Siamese breeder from Philadelphia, USA named Dorothy Hinds-Daugherty found three kittens in a litter with a fault. All four of their paws were white. Despite not being favourable features in Siamese cats, Hinds-Daugherty found the quirk rather interesting. As such, she set about developing a new breed from this fault.

She crossed the white-pawed feline with a bi-colour American Shorthair. There have been accounts that she particularly used kitties with “tuxedo” markings. She later produced the kind of cat that has since been known as the Snowshoe.

Although the Siamese is one of its parent breeds, the Snowshoe cat does not resemble the colour-pointed feline. However, it did have the Siamese hallmark, which is the colour pointed marking.

Hinds-Daugherty later discontinued the breeding of the Snowshoe after it got no recognition even at local cat shows. Another breeder, Vikki Olander, took up the reins and continued developing the line. Her efforts eventually earned the breed an “experimental breed” recognition from the CFF and ACA. Later, more breeders got interested in the feline breed and helped develop it. In 1990, the Snowshoe gained champion status from the American Cat Fancier’s Association. In 1993, it got recognised by the ICA. It also has since been recognised by the Fédération Internationale Féline.

Meanwhile, in the UK, the development of the breed began in 1983. A Snowshoe Cat Club was later established. A concerted effort later emerged to bring the Snowshoe to full breed recognition by the GCCF. Today, these white-pawed wonders are gradually becoming popular in various parts of the world.

The Snowshoe cat’s weight ranges from 3-6 kg. Its body is long and looks heavy than it actually is.

Its head is medium-sized, wedge-shaped, and proportionate to its frame. It has moderately large ears and high cheekbones. The eyes slant towards the base of its ears and are walnut shaped. They are always a dazzling blue colour. Its face has an inverted V marking on its muzzle, which is one of the breed’s hallmarks.

The Snowshoe’s body is well-balanced, with a moderately long neck and tail. Its legs are slender and end in oval shaped paws, all four of which are white.

This feline’s coat is short-haired but dense. It is close-lying and glossy, and also comes in a wide variety of colours and combinations. It also has the colour-pointed markings that are from its Siamese parent breed. As a kitten, its distinctive colouring is not yet evident but emerges after a number of weeks.

Is the Snowshoe cat hypoallergenic? Whilst it is not completely so, it produces lesser amounts of the protein that triggers allergic reactions. Further, this kitty is low maintenance on the grooming front.

The Snowshoe cat is very affectionate, mellow, and loyal. It gets along with everyone, even fellow pets. It is very social but may develop the most significant bond with one member of the family. Usually, it’s with the one that takes care of it the most.

It can be talkative but speaks in a soft voice. It is most suitable to families who can shower it with much attention as it likes to be around its people. As such, it is prone to separation anxiety and must not be left on its own for long periods.

The Snowshoe is a smart kitty. It can be taught tricks and may even learn to open doors on its own. It is also known to enjoy playing with water and perching on high vantage points.

The Snowshoe cat should be provided a nutritious diet that fulfils its daily requirements. It should be consistently given the same food following the same feeding times. If there are changes to its diet, those must be done gradually to prevent stomach problems.

Unlike her ancestor, the Siamese, the Snowshoe cat has a shorter lifespan of 9–15 years.

She may be a generally healthy and sturdy breed, but she is still susceptible to other common cat illnesses like gingivitis and polycystic kidney disease.

Some Snowshoes may have a kink in their tails and others may have crossed eyes like some Siamese cats. Worry not as these are just aesthetic defects and not related to the Snowshoe breed's overall health.

The Snowshoe cat breed is known to be active and playful. The Snowshoe loves the company of her people and likes to participate in their activities. This vibrant feline enjoys playing interactive games with her humans and can even learn a few tricks. She can also be taught to walk on a lead.

The Snowshoe cat is not only athletic but she is intelligent as well. It is not surprising to see her opening doors and drawers. She also has a knack for climbing and sitting in high places.

With Snowshoe’s energetic nature, she does not have special exercise requirements. She can be left alone for a few hours. Help to keep her busy with providing your Snowshoe cat with high-activity toys.

On average, the Snowshoe cat price starts at £200. Insurance expenses would cost £16 (basic) or £29 (lifetime) monthly. Food costs may range from £15-£20 each month. For vaccinations, boosters, annual checks and other veterinary costs, pet care costs may add up to more than £500 each year.

On average, a Snowshoe cat owner will spend about £40-£60 per month. The insurance costs can also affect this estimate. For its entire lifetime (9-15 years), the expenses can be as low as £4,320 to as high as £10,800 overall. This estimate does not include the initial costs incurred in acquiring this cat. 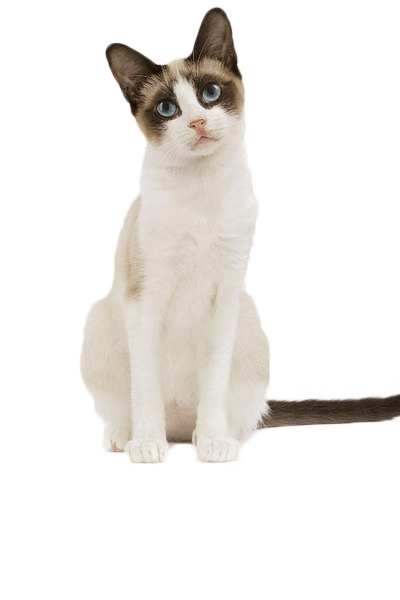 Are you sure the Snowshoe is the best breed for you? Take the Pet Breed Selector Quiz to find your perfect breed match.

Is the Snowshoe your purrfect match? Take our Cat Finder so you can find the most suitable breeds for you.

Cat Finder
Disclaimer:
The information, including measurements, prices and other estimates, on this page is provided for general reference purposes only.
Singapura
Sokoke
Contents
Not the breed you're looking for? Click Here
Latest Stories

Abnormal dog behaviours are often overlooked during their early stages. Many dog owners misinterpret these behaviours. As a result, dogs end up in … END_OF_DOCUMENT_TOKEN_TO_BE_REPLACED