Thinking of buying or adopting a Bernedoodle?

The Bernedoodle is a hybrid breed that is full of vigour. He is a lively dog with a sweet disposition. His goofiness and great love for his human companions garnered him countless fans. Since it is relatively a new breed, he is not yet recognised by the Kennel Club.

It is a designer breed, a mix of the poodle and the Bernese mountain dog. He was solely created to be a wonderful family companion. The breed inherited the Bernese’s affectionate and amusing nature and the poodle’s intelligent mind.

Origins of the Bernedoodle

The Bernedoodle dog breed is thought to have existed for a long time. However, it was Sherry Rupke of Swissridge Kennels that was recognised as the first breeder to create this mixed breed. Back then, Sherry was separately breeding the golden Labradoodle and the Bernese mountain dog.

It saddened her that the Bernese breed has such a short lifespan. So, she thought of making a new breed similar to the golden Labradoodle by using the Bernese. Thus, she cross-bred a poodle with a Bernese mountain dog. Her efforts proved to be fruitful as the first Bernedoodle pups were born in 2003 in Canada.

How big does a standard size Bernedoodle get?

How much does a Bernedoodle weigh?

The weight of an adult standard Bernedoodle is approximately 50–90 lbs. A grown-up mini Bernedoodle weighs 25–29 lbs, whilst a fully mature tiny Bernedoodle’s weight is about 10–24 lbs.

The Bernedoodle’s body is sturdy and square-shaped. He has a triangular muzzle. His ears hang down along his head. He has black, oval eyes that are set far apart. His tail is bushy and carried high. He possesses thick, cushioned pads. A Bernedoodle that has a predominant Bernese gene is more likely to be taller and have a more defined, strong, equilateral physique.

His coat often varies depending on which parent breed's gene prevails. One that has more Bernese blood will have a straighter coat. The one that acquired more of the poodle genes has more chances of inheriting the curly and wavy coat. His coat is dense, which gives him protection from the heat and insulation during the cold season. He has a variety of coat colours, including white, brown, black, blue, grey, silver, fawn, apricot, cream, café au lait, black and white, and black and brown. There’s also the tricoloured coat that is composed of black, white, and brown.

The Bernedoodle's hypoallergenic coat is one of the things that are sought after by many dog owners. It is worth noting that a Bernedoodle with a curly coat sheds less, thus producing minimal dander. This dog is more fitting for allergic people. The one that possesses a straighter coat moults often, which makes him less hypoallergenic.

What are the Bernedoodle’s grooming needs?

The one with a straight coat requires at least once a week of brushing. However, since he sheds more, be prepared to brush him frequently during his moulting season. The Bernedoodle dog with curly hair needs more brushing.

Brushing must be done at least three to four times a week to prevent mats and remove debris. Be sure to take him to the groomer if his coat grows too long. When it comes to bathing, only do it once he becomes too dirty or smelly. Frequent washing will dry his skin and hair and will cause skin problems.

Clip his nails every three to four weeks to prevent splitting or cracking of nails. This poodle mix has droopy ears, so cleaning them often is a must to prevent ear infections.

Gum diseases are common in dogs, so incorporate a daily dental routine in his daily grooming.

The Bernedoodle is primarily bred to be a great family dog. He is expected to be extremely friendly and fond of his human companions. He is a Velcro dog that wants to stick close to his loved ones. He makes a good companion dog. Because of his loyalty to his owners, he can be protective of them and be indifferent around strangers.

His love for his family has a downside. If left alone for too long, the Bernedoodle may have separation anxiety. It can cause him to develop unwanted behaviours such as incessant barking, digging, and ruining furniture. Therefore, make sure that he has a companion with him throughout the day when the rest of the family is out.

The Bernedoodle is great for families with children and other pets. He is a lively dog that thoroughly enjoys fun and games. However, supervision is still recommended as he could be aloof at times and might cause an accident. Adults need to teach younger children how to gently handle dogs, too, to prevent them from hurting the dogs.

Early socialisation paired with proper training is crucial. This will greatly help the Bernedoodle to mature into an amiable and sociable dog. Lack of socialisation may lead him to become vicious or timid around people and other animals.

When it comes to training, the Bernedoodle is quick-witted and very eager to please his owner. However, he has a slight stubbornness in him, so be patient.

Training should be firm and consistent, but also gentle. Rough training will only lead him to defy you. Instead, use positive reinforcement training, such as praising and giving him treats to encourage him even more.

Protect your Bernedoodle pup from malnutrition and serious health issues by supplying him with a high-quality diet that is rich in protein, carbohydrates, fats, vitamins, and minerals. Since the Bernedoodle is an active and high-energy breed, he will benefit more from protein-rich food. The best dog food will have meat as the primary ingredient. Some protein sources may include fish, chicken, or beef.

Make it a habit to divide his meals into two servings. This is to prevent him from gorging on his food. Quickly devouring food can lead to a bloated stomach and weight gain.

An energetic dog that likes to have fun, the Bernedoodle needs at least thirty minutes to an hour of workout. Walking around the neighbourhood, playing fetch, or learning new tricks are fun ways to expend his energy. Since the breed is known to love water, consider taking him to the beach or the lake for a swim.

The Bernedoodle is a healthier breed compared to the poodle and the Bernese mountain dog. In fact, he has a lifespan of twelve to eighteen years. Smaller variations of the breed tend to live longer than their larger counterparts. However, there are still a few health issues that you need to look out for, such as:

What impacts the cost of Bernedoodles?

If you are set in getting a Bernedoodle puppy, it may cost around £800 to over £2,000. Many factors can affect the price tag. These include:

How much does it cost to raise a Bernedoodle?

Dog food expenses may range between £200 and £300 for the toy and miniature Bernedoodle. Meanwhile, it can cost about £300 to over £400 for a standard Bernedoodle. Providing him with basic items including bedding and toys is approximately £200–£400.

Vet check-up fees are around £30 per session. The price for initial vaccines is about £100. Yearly boosters may cost around £50 per shot. Getting pet insurance for a healthy puppy will cost between £20 and £30 a month on average. 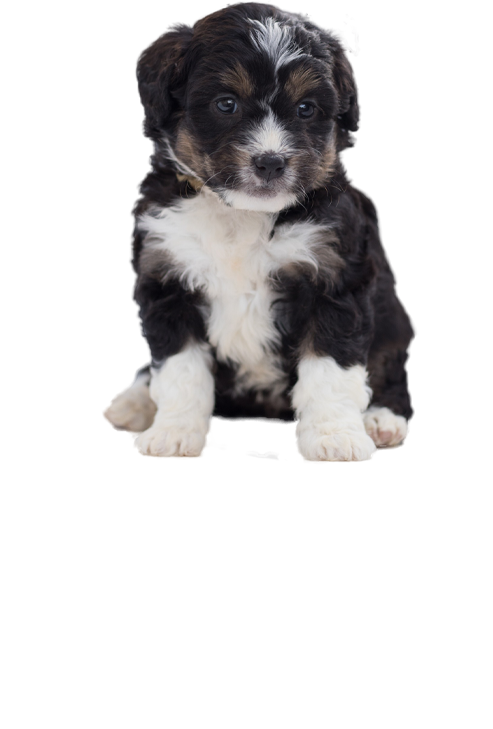 Are you sure the Bernedoodle is the best breed for you? Take the Pet Breed Selector Quiz to find your perfect breed match.

Dog Breed Selector Quiz
Disclaimer:
The information, including measurements, prices and other estimates, on this page is provided for general reference purposes only.
Bergamasco
Bernese Mountain Dog
Contents
Not the breed you're looking for? Click Here
Latest Stories

Dogs are common hosts for various intestinal worms. Many dog owners are wondering, “What home remedy can I use to deworm my dog?” We have  6 natural … END_OF_DOCUMENT_TOKEN_TO_BE_REPLACED 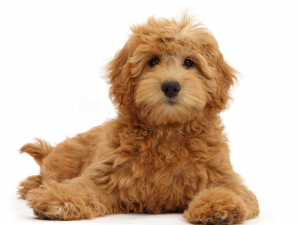 Poodle mix breeds have existed for around seventy years speculatively due to accidental mating. Today, they are some of the most favourite breeds worldwide. This is all thanks to breeders' efforts of meticulous breeding over the last twenty to thirty years. Below are the top 10 dog breeds mixed with poodles that will charm your heart with their gorgeous looks and sweet personalities: 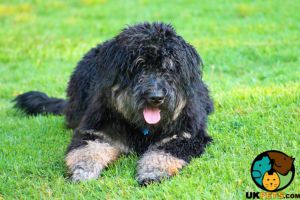 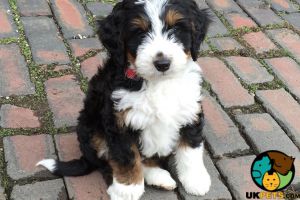