Thinking of buying or adopting a Russian Black Terrier?

The Black Russian Terrier, also known as the RBT was bred by Russian soldiers at the end of World War II. It is a loyal, courageous and confident dog that is not suitable for new owners. It builds a strong bond with its owners and will tend to be overprotective. It is recognised by The Kennel Club under the Working group.

Has the Black Russian Terrier caught your attention? Here is a brief background of this loyal Russian dog.

The Black Russian Terrier was developed during the Cold War by Russian army scientists with the intention of creating the perfect dog that could withstand extremely cold weathers. Records show that there were a total 17 breeds used to create the RBT including Rottweilters, Giant Schnauzers, Airedale Terriers, Great Danes, and some local dogs.

The Terrier Russian Black was exclusively bred by Red Star Kennel under the supervision of the Red Army. The breed worked alongside soldiers mainly chasing intruders. Later on, it worked at prisons, rail crossings and other military venues like gulags (Soviet forced labor camps). When the gulags closed in the 50s, there were an excess of the RBT, forcing them to sell puppies to the public. The first breed standard was set in 1958. It earned a good reputation for being a loyal and even-tempered companion and family pet. In spite of this and the fact that it is recognised by major dog registries, it is not yet a familiar breed in other countries, and only a low number of RBT puppies are produced worldwide.

The Black Russian Terrier is a large, imposing dog that weighs 80 to 140 pounds and stands 66 to 77 centimetres at the withers. It basically looks like a larger version of the Giant Schnauzer. It is a well-proportioned dog that is strongly built with a heavy bone. Its head is suitably proportionate with a broad and flat skull, a moderate stop, and a muzzle that tapers slightly toward its nose. It also has a strong jaw with a perfect scissor bite, a large nose, oval-shaped dark eyes with tight fitting dark eyelids, triangular pendant eyes, and thick black lips. Its hardy body is almost square.

The RBT is adorably covered in a weather resistant double coat, which is not soft or wiry. The hair looks broken and slightly waved when it is brushed. It has a dense undercoat and boasts of delightful eyebrows, whiskers and beards that square off its muzzle. According to KC standards, the accepted colours are black and black with grey.

The Black Russian Terrier’s double coat is high maintenance and owners need to brush it every day to avoid matts and tangles. Special attention should be given to the muzzle where food usually gets stuck to the whiskers and beard. It sheds minimally throughout the year but heavily two times a year, during spring and autumn. It nails should be trimmed when there are clicking sounds on the floor, teeth brushed at least two times a week, and ears cleaned to avoid too much wax build-up.

The Black Russian Terrier is a confident, courageous and even-tempered dog that is famous for being emotionally stable. As a military dog, it is loyal, self-assured and aloof toward strangers but never aggressive. It is not recommended for first-time owners because it needs guidance from an experienced owner who knows how to handle this type of dog. Training and socialisation should start as soon as the puppy arrives and would need constant attention and guidance and may become withdrawn if it feels ignored. If you live in a busy household where all members are out most of the time, this dog is not for you. It suffers from severe separation anxiety and may become restless, which can trigger unpleasant behaviour.

The BRT builds a strong bond with its owners, including children and would protect them with all its strength. It is important to curb overprotective tendencies and teach it good manners. This breed is smart and will have a tendency to be strong willed, but because it loves pleasing its owners, it is highly trainable. However, owners need to establish its alpha role so the Black Russian Terrier will know its place in the pack, which is below everybody else in the household.

Black Russian Terriers love children of all ages and are gentle toward them. However, adults should be cautious during interactions, so no one accidentally gets hurt when play becomes too rowdy. It is also important to teach the RBT that the kids’ friends are not a threat, so there is no need to be overprotective when they visit the home. The breed can get along with other pets it grows up with, but males are often described as “off” when meeting other male dogs. It is better not to introduce new pets, big or small to an RBT to be on the safe side.

A typical serving for an adult Black Russian Terrier is 3 to 4.5 cups of excellent quality dry dog food per day. However, the dog’s age, size, build, metabolism, and activity level help determine the amount of food and frequency of feeding. If you are unsure if your dog is getting the right nutrients, consult your veterinarian. Owners sometimes overestimate their dog’s food or give too many treats because they still look hungry. Keep in mind that large breeds like the RBT are prone to bloat and obesity. Typical calorie needs of a 110-pound adult Black Russian Terrier per day:

Whether home-cooked or commercial dog food, the number one ingredient for this large energetic dog’s diet should be meat. It is important for it to stick to an eating schedule and avoid free-feeding. When you choose to prepare its food, ask your vet for supplements to prevent nutritional deficiencies. If you opt for commercial dog food, choose trusted brands with limited ingredients and stir clear of those with fillers like soy, corn and wheat.

The Black Russian Terrier is a generally active dog with an average lifespan of 10 to 11 years. However, you have to watch out for certain health issues it is prone to develop such as Hip and Elbow Dysplasia, Otitis, Progressive Retinal Atrophy, allergies, and ear infections. While it does not mean that your RBT will suffer from any of these illnesses, they are all worth knowing.

The RBT is a large, active and intelligent dog that needs at least 2 hours of exercise every day. When its physical and mental exercise needs are not met, it will display unwanted behaviour such as becoming noisy and destructive. Since it was bred as a working dog, it will not be content with daily walks. Make sure to give it mentally stimulating activities like jobs or playing interactive games.

Purchasing a well-bred Russian Black Terrier pedigree puppy can cost you £350-£1000. To ensure that it grows healthy, you would need to feed it high quality dog food, which can range from £40-£50 a month. You would also need to buy it treats and accessories such as food bowls, leads, collars, and bed. The initial combined cost for these things can set you back £200 depending on the brands you opt for.

Aside from the initial purchase, pet insurance is another cost that you will have to shoulder monthly, ranging from £62 for a basic cover up to £107 a month for a lifetime cover. These prices vary depending on your dog’s health, age, size, weight, and where you live in the UK.

You may also need to set aside £1400 a year for veterinary consultations and other necessary procedures such as vaccinations, boosters, neutering/spaying as these are not always covered by pet insurance. To give you a rough idea on how much you will likely spend month on month, it would be within the range of £100 and £160. This is exclusive of walking or grooming services that you might want to use at times. 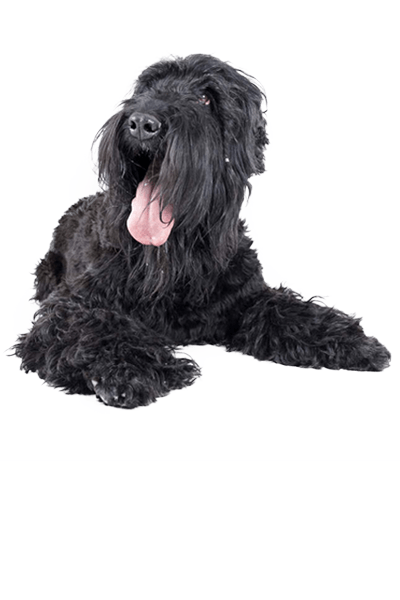 Are you sure the Russian Black Terrier is the best breed for you? Take the Pet Breed Selector Quiz to find your perfect breed match.

Is the Black Russian Terrier intimidating for you? Try taking our Pet Finder to help you choose the best breed for you.

Disclaimer:
The information, including measurements, prices and other estimates, on this page is provided for general reference purposes only.
Rough Collie
Russian Toy Terrier
Contents
Not the breed you're looking for? Click Here
Latest Stories

Dogs are common hosts for various intestinal worms. Many dog owners are wondering, “What home remedy can I use to deworm my dog?” We have  6 natural … END_OF_DOCUMENT_TOKEN_TO_BE_REPLACED 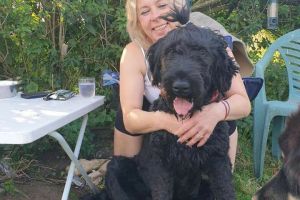 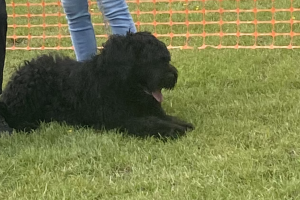